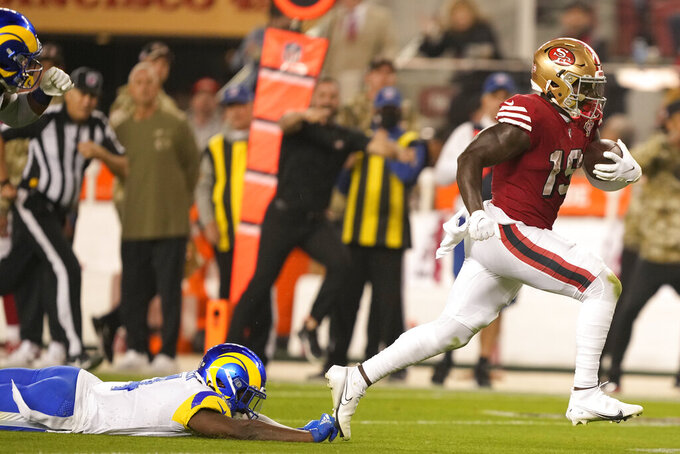 OPENING LINE: 49ers by 6½, according to FanDuel Sportsbook.

AGAINST THE SPREAD: San Francisco 3-6; Jacksonville 4-5.

TURNOVER DIFFERENTIAL: 49ers plus-7; Jaguars minus-10.

49ERS PLAYER TO WATCH: WR Deebo Samuel had five catches for 97 yards and a TD and five carries for 36 yards and a score last week. He became the first Niners receiver to score on a TD run and catch in the same game since Bruce Ellington in 2014. Samuel’s 979 yards receiving are the second most in team history through nine games, trailing on Jerry Rice’s 1,006 in 1990.

JAGUARS PLAYER TO WATCH: DE Josh Allen has been a game-wrecking player in recent weeks. He has 13 solo tackles, including three sacks, an interception and a fumble recovery in the last three games. He ranks third in the NFL with eight tackles for a loss.

KEY MATCHUP: San Francisco’s improving ground game versus Jacksonville’s stout run defense. The Niners are coming off a season-high 156 yards rushing against the Rams and averaged 8.6 yards a carry two weeks earlier at Chicago. The Jaguars settled down after a shaky start last week against the Colts – Jonathan Taylor had 93 yards rushing in the first quarter -- and were solid for the fourth consecutive game.

KEY INJURIES: RB Elijah Mitchell broke a finger last week, but the Niners are hopeful he can play Sunday. ... RT Jaylon Moore, who took over for injured Mike McGlinchey last week, is dealing with a knee injury that could keep him out. … Jaguars RB James Robinson (heel/knee) is playing through pain. The Jaguars hope to get back C Brandon Linder and TE James O’Shaughnessy from injured reserve this week or next.

SERIES NOTES: The Niners have won three straight in the series, averaging 43 points in the last two. Both of those Jaguars losses are part of the team’s worst stretch in franchise history against the NFC. Jacksonville has lost 13 consecutive games against the other conference, including 0-2 this season, and is 7-43 in their last 50 games versus the NFC. Their last win versus the NFC came in the 2018 season opener at the New York Giants.

STATS AND STUFF: San Francisco is 3-1 on the road this season and 15-5 since 2019. ... The Niners had two TD drives of at least 90 yards last week, the second time they have done that this season. ... The 49ers ran the ball 44 times last week, their most in a regular-season game since 2012. ... Niners TE George Kittle has TD catches in back-to-back games for the first time in his career. ... San Francisco QB Jimmy Garoppolo has three straight games with a passer rating of at least 100 and leads the NFL with a 109.8 mark in that span. ... Niners S Jimmie Ward had two INTs and a pick-6 vs. the Rams after having only two INTs in his first 85 career games. ... K Robbie Gould topped the 500-point mark since joining San Francisco after doing that already in Chicago. He’s the 10th player with at least 500 points with two franchises. ... San Francisco DL Arden Key has sacks in back-to-back games. … Jacksonville, which beat Buffalo at home two weeks ago, hasn’t won consecutive games at TIAA Bank Field since 2017. … Jaguars coach Urban Meyer recruited Niners DE Nick Bosa to Ohio State. ... CB-turned-WR Jamal Agnew ran for a 66-yard score last week. … TE Dan Arnold has at least four receptions and 60 yards in each of the last three games.

FANTASY TIP: Samuel and Kittle are must starts against Jacksonville, whose defense is a sleeper pick. The Jaguars have allowed two touchdowns and five field goals in their last two games.