Jaguars' Lawrence on 5-turnover game: 'No one else to blame' 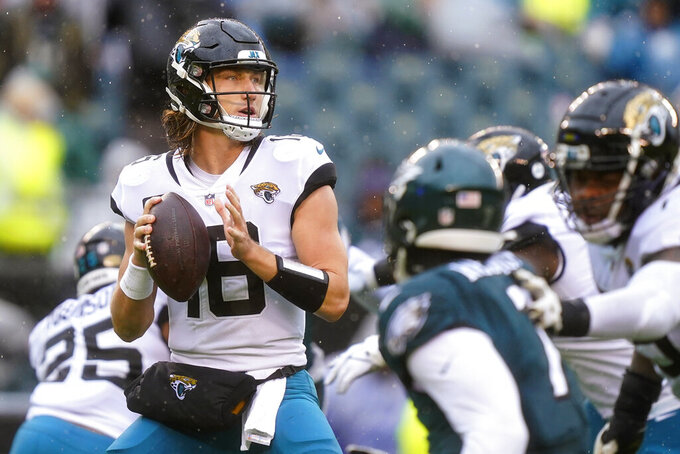 Jacksonville Jaguars' Trevor Lawrence looks to pass during the second half of an NFL football game against the Philadelphia Eagles on Sunday, Oct. 2, 2022, in Philadelphia. (AP Photo/Matt Rourke)

JACKSONVILLE, Fla. (AP) — Trevor Lawrence has never played like he did at Philadelphia on Sunday.

Not in the NFL. Not in college. Not in high school. Not in a backyard pickup game. Not ever.

Lawrence turned the ball over five times — four fumbles and an interception — in a 29-21 loss at the Eagles in strong wind and steady rain.

The top pick in the 2021 draft, a quarterback widely considered a generational prospect who seemed to be turning a corner with standout performances the past two weeks, looked like an undrafted rookie making his first road start.

He botched snaps. He held the ball too long. He fumbled once without any contact. He threw late. He stared down receivers. He was a version of himself no one had seen before.

“I’m just (ticked) I let those guys down and just had too many turnovers,” said Lawrence, who completed a career-low 11 passes for 174 yards. “Obviously it starts with me. All of them were me so no one else to blame there. To let those guys down, it’s disappointing.”

After Jacksonville took a 14-0 lead in the first quarter, Lawrence ended five of the team’s final eight possessions with costly miscues. He became the first player since Buffalo running back Curtis Brown in 1979 to lose four fumbles in a game, according to ESPN Stats & Info.

Despite Lawrence’s mistakes, the Jaguars had a chance to tie the game at the end. They were still in it thanks to safety Andre Cisco’s 59-yard interception return for a touchdown in the first quarter and a defense that made two fourth-down stops. It also helped that the Eagles settled for a short field goal, missed an extra point and failed to convert a 2-point conversion.

Still, keeping games close while playing poorly is progress for a franchise that's lost 31 times by double digits in the previous four years.

Jacksonville allowed 210 yards and four touchdowns rushing, a demoralizing effort for a unit that entered the game leading the league against the run. Miles Sanders led the way with 27 carries for a career-high 134 yards and two scores. Missed tackles were the biggest issue to go along with mental errors and blown assignments.

Jamal Agnew caught both of Lawrence’s touchdown passes. He finished with four catches for 50 yards while playing in place of Zay Jones (ankle). Agnew also was wide open for what could have been a 41-yard touchdown reception on the first play of the second quarter.

He had gotten behind the defense with a double move, but Lawrence overthrew him by several yards.

Veteran receiver Marvin Jones dropped a pass and finished without a catch for the first time in nine years. He ended his consecutive games streak with at least one reception at 117. The previous time he failed to catch a pass in a game was Sept. 29, 2013, at Cleveland. He was playing for Cincinnati at the time.

8 — number of consecutive losses for the Jaguars against Houston. The Texans have swept the series each of the past four years.

The Jaguars have a chance to make strides in the AFC South with back-to-back games against Houston and Indianapolis.