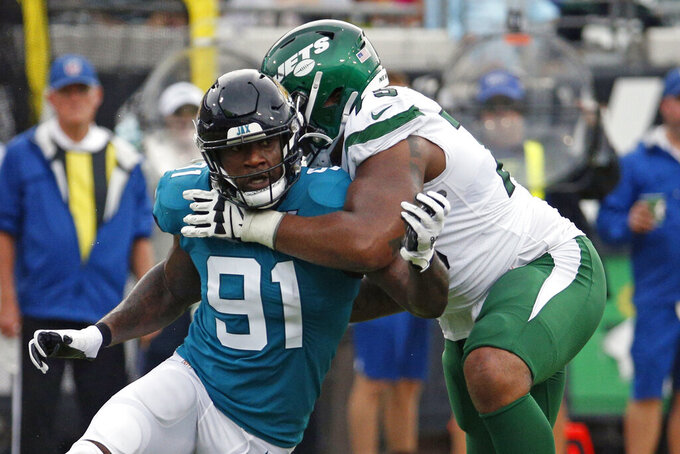 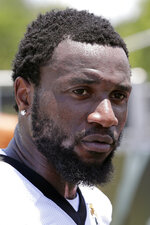 JACKSONVILLE, Fla. (AP) — The Jacksonville Jaguars placed the franchise tag on disgruntled defensive end Yannick Ngakoue on Friday, a move that guarantees him more than $19 million next season.

It's the non-exclusive tag, a one-year tender offer that equates to the top five salaries at the player's position over the last five years. Ngakoue can negotiate with other teams. Jacksonville has the right to match any offer or receive two first-round draft picks as compensation if he signs elsewhere.

Ngakoue also could refuse to sign the tender and try to force a trade. He announced earlier this month that he no longer wants a long-term deal from the Jaguars.

The 24-year-old Ngakoue doesn’t believe the front office has shown him enough respect considering what he has done since joining the organization as a third-round draft pick in 2016.

Ngakoue's concerns stemmed from former Jaguars personnel chief Tom Coughlin's reign. He hoped a change in leadership would lead to a new contract. But the Jaguars have been slow to negotiate, partly because they are waiting for a new Collective Bargaining Agreement.

Ngakoue has 37 1/2 sacks and 14 forced fumbles in four seasons. The speedy strip-sack specialist made the Pro Bowl in 2017 and was an alternate the past two seasons. He clearly outplayed his $3.84 million rookie contract. He made $2.025 million in 2019 — far less than other top playmakers at his position.

Ngakoue insisted the day after the season ended that he's “not going to play for pennies.” He had been seeking around $22 million a year to remain in Jacksonville, but the Jaguars don't seem to consider him a complete or elite defensive end worthy of that much annually.

Jacksonville also selected Ngakoue's potential replacement, Josh Allen from Kentucky, with the seventh overall pick in the 2019 draft. Allen had 44 tackles, 10 1/2 sacks and two forced fumbles as a rookie and made the Pro Bowl as an alternate.

If Ngakoue does end up elsewhere, he would be the latest in a growing list of defensive starters from the 2017 team — the one that came a few plays short of the Super Bowl — to move on.

—Linebacker Telvin Smith abruptly quit last May, leaving $10 million on the table, and eventually retired to avoid getting fined.

—Disgruntled cornerback Jalen Ramsey faked a back injury early last season and forced a trade to the Rams.

—Defensive tackle Marcell Dareus is now a free agent after Jacksonville declined an option in his contract that would have paid him $19.5 million in 2020.

—Cornerback A.J. Bouye was traded to Denver two weeks ago in exchange for a fourth-round pick in 2020, creating about $13.5 million in cap savings.

Those decisions leave linebacker Myles Jack and veteran defensive linemen Calais Campbell and Abry Jones as the only key holdovers from Jacksonville's 2007 defense.