Jaguars' stunner vs Bills 'no good unless we build on it' 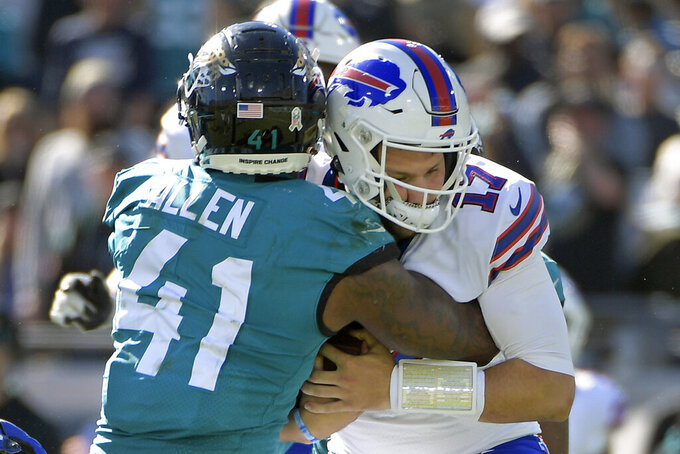 JACKSONVILLE, Fla. (AP) — The Jacksonville Jaguars ended the NFL’s longest losing streak in nearly 45 years by winning in London last month. They topped that with a stunning victory against Super Bowl favorite Buffalo on Sunday that resulted in their first celebration on American soil in 420 days.

“It’s no good unless we build on it,” coach Urban Meyer told his team following a 9-6 shocker at home against the mistake-prone Bills.

The Jaguars (2-6) have two more dubious streaks they’d like to wipe out in the second half of the season: They haven’t won a road game since December 2019 – a 12-game skid that’s currently the longest in the NFL – and haven’t won consecutive games since October of that same season.

They play at Indianapolis (4-5) on Sunday, a chance to prove Sunday’s defensive masterpiece was more than a fluke.

The Jaguars have won two of their last three games, a modest turnaround for a team that has endured its share of tumultuous times.

“It’s just not making it bigger than it is,” rookie quarterback Trevor Lawrence said. “When we put our best out there, we can play with anybody."

Lawrence is the main reason the Jags have hope for the future. The overall No. 1 draft pick has eight touchdowns and nine interceptions while playing with an average receiving corps and a makeshift offensive line that was without three starters against the Bills. It’s clear the Jaguars need to spend big, whether in the draft or in free agency, to add talent around Lawrence.

The defense looked like a bigger overhaul until Sunday. The unit dominated up front, finishing with four sacks and creating a season-high three turnovers. Pass rusher Josh Allen turned in a career game against his Bills namesake, ending up with a sack, a fumble recovery and his first career interception.

“They pick a number and away we go: sideline, locker room, bathroom,” Griffin said. "It’s pretty much a thing now.”

It’s another building block for sure, something Jacksonville needs more of to take the proverbial next step.

“I feel like a lot of people doubted us,” Griffin said. “If you remember the games we put up before, you gave every right for guys to kind of doubt us. But we’ve got to prove them wrong. We’ve got to prove ourselves right, actually."

Jacksonville’s stout run defense will be tested against Indianapolis, which ranks fifth in the NFL with 137.3 yards a game on the ground. The Colts ran for 260 yards in a 45-30 win against the New York Jets last week. The Jaguars are giving up 3.79 yards a carry, which ranks third in the league.

Special teams have been up and down all season. Jamal Agnew returned two kicks for scores early, and Matt Wright made two field goals from beyond 50 yards in the waning minutes to beat Miami in London in Week 7.

But Wright failed to reach the end zone on four kickoffs Sunday, allowing the Bills to average more than 32 yards a return, and missed three field goals (only one counted) in a matter of minutes.

Plus, the Jaguars rank last in the league in punt return yardage.

Bryan, the 19th overall pick in the 2018 draft, had his best game as a pro. He sacked Buffalo’s Josh Allen twice, bringing his total to 5½ in 55 career games. His performance might have been more surprising than the game's outcome.

Rookie left tackle Walker Little made his first NFL start, his first since injuring a knee in Stanford’s 2019 season opener. Little was a last-minute replacement for Cam Robinson, whose back locked up during pregame warmups, and held his own. But he gave up a sack and stepped on Lawrence’s right foot after getting pushed into the backfield.

Lawrence has a low-ankle sprain and could be limited this week. X-rays were negative. Running back James Robinson is expected to return after missing Sunday's game with a bruised right heel. The Jaguars still hope to get center Brandon Linder (knee/ankle) back soon. Receiver DJ Chark (ankle) and guard A.J. Cann (knee) are the team's only starters out for the season.

The Jaguars need to better handle success. They followed their win in London with a stinker at Seattle.