Jets creating an identity by flourishing in 4th quarter 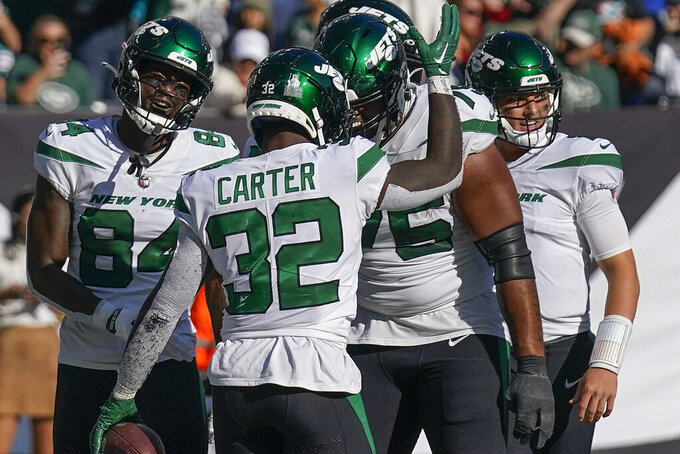 New York Jets running back Michael Carter (32) celebrates with teammates after scoring a touchdown against the Miami Dolphins during the fourth quarter of an NFL football game, Sunday, Oct. 9, 2022, in East Rutherford, N.J. (AP Photo/Seth Wenig)

FLORHAM PARK, N.J. (AP) — The New York Jets are the best team in the NFL — in the fourth quarter of games.

The Jets have outscored opponents 58-20 in the fourth quarter, including the 21 points they scored Sunday in a 40-17 win over Miami that snapped a 12-game skid against AFC East opponents.

The 58 points are the most by any team in the final quarter this season, and the 38-point differential is second in the league to Arizona's 40.

They've done exactly that the past two games — both victories.

Two weeks ago, the Jets trailed the Steelers at Pittsburgh 20-10 with 13:36 left in quarterback Zach Wilson's season debut. After completing just eight of his first 24 passes for 124 yards through three quarters, Wilson went 10 of 12 for 128 yards while leading two touchdown drives — capped by Breece Hall’s go-ahead 2-yard run with 16 seconds left.

Last Sunday, the Jets were sluggish through the first three quarters and were leading the Dolphins — who were down to rookie third-string quarterback Skylar Thompson — 19-17. But the defense came up with a takeaway and the offense scored touchdowns on three straight possessions to turn the game into a blowout.

New York's five fourth-quarter takeaways are tied for the most in the NFL.

“When we get a chance in the fourth quarter, I mean, you just don’t have any quit,” coach Robert Saleh said.

The coach has preached the Navy SEAL “40% rule” to his players: When your mind and body tell you that you can't go any further, your will still has 60% more to give.

“I think this locker room embodies that,” said Saleh, whose team regularly wears “60%” T-shirts around the facility. "We have a bunch of guys who love the game, they’re focused on the moment, they go one play at a time, like all the clichés.

“It just feels like that’s what you see and what they represent on the football field, especially when the fourth quarter hits.”

New York's other victory this season — 31-30 in Week 2 at Cleveland — was the result of another comeback in the final period. Joe Flacco, filling in for the injured Wilson, rallied the Jets to a win after they trailed by 13 with 1:55 remaining.

“We’ve been clutch, for the lack of a better word, for the most part.”

The key now, of course, is turning that final-period success into consistency over all four quarters. While the Jets are leading the league by averaging 11.6 points per fourth quarter, they're also averaging 11.6 in the other three periods — combined. Through five games, New York has scored 14 first-quarter points, 41 in the second and just three in the third.

At the very least, though, the Jets are becoming increasingly confident they can come back from deficits if they're within striking distance late in games — or put teams away.

“If you go back to preseason, it’s been our best quarter,” Saleh said. “We’ve got a great mindset. We have a young group that does not flinch. We get stronger as we go.”