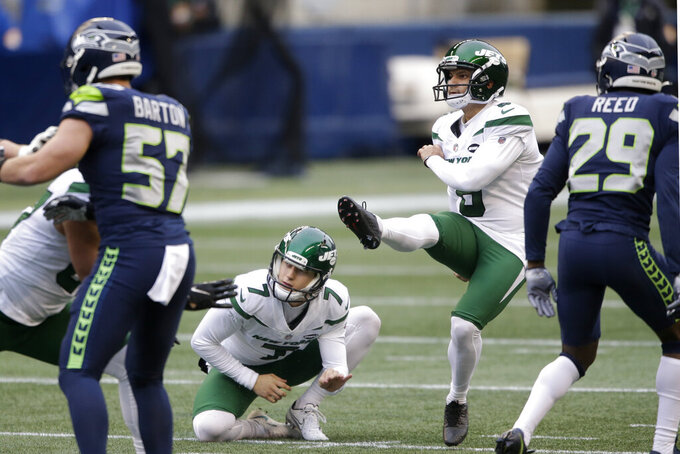 Castillo had been filling in for Sam Ficken, who's on injured reserve with a strained groin but could be cleared to practice this week. The Jets also claimed kicker Chase McLaughlin off waivers from Jacksonville on Monday, signaling Castillo's likely departure.

The 30-year-old Castillo was signed to the Jets' practice squad on Oct. 14 and to the active roster two weeks later when Ficken initially injured his groin. Castillo went 6 for 7 on field goals — with the only miss a blocked kick — and made all four of his extra points in three games before Ficken returned.

But Ficken was re-injured and Castillo stepped in again, but struggled in the past three games. He missed four of six field-goal tries, including attempts from 37, 41 and 43 yards in the 40-3 loss to the Seahawks, and was 2 for 3 on extra points. In six games overall with the Jets, Castillo was 8 for 13 on field goals.

Castillo went six years between NFL chances and his journey was one of the few feel-good stories during the winless Jets' dismal season. He was signed by Atlanta as an undrafted free agent out of West Texas A&M in 2014, but was cut during training camp. Castillo had stints in the CFL, XFL and Alliance of American Football and was cut eight times before getting the opportunity with the Jets.

New York has had issues with consistency at kicker since Nick Folk's last season with the team in 2016. If McLaughlin plays Sunday against the Los Angeles Rams, he would be the sixth player in the past four seasons to kick in a regular-season game for the Jets. He would join Ficken, Castillo, Kaare Vedvik (2019), Jason Myers (2018) and Chandler Catanzaro (2017).