Jets hit bye at 6-3 with playoffs a realistic expectation 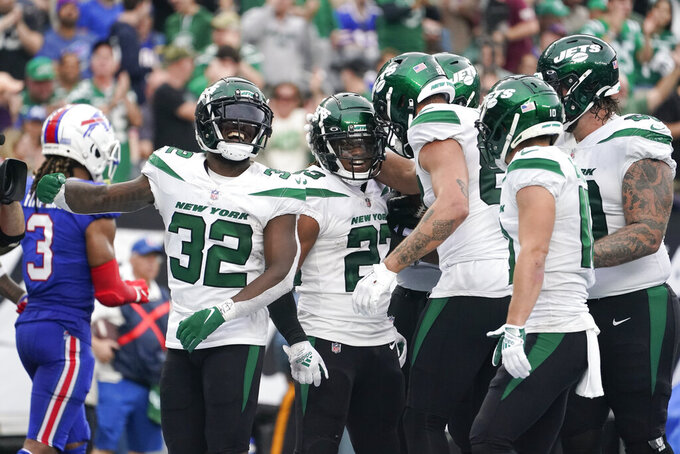 New York Jets running back James Robinson (23) celebrates with teammates after scoring a touchdown during the second half of an NFL football game against the Buffalo Bills, Sunday, Nov. 6, 2022, in East Rutherford, N.J. (AP Photo/John Minchillo)

Six wins is just about what many people expected for the New York Jets.

For the entire season.

At 6-3 and headed into their bye week after a stunning 20-17 victory over Buffalo, the Jets are on quest to deliver the franchise — and its long-frustrated fans — a playoff berth for the first time since 2010, which seems like a reasonable and realistic expectation.

“We’re excited with where we're at, but we know there’s a lot of work that needs to be done," quarterback Zach Wilson said Monday. "I think because of where we're at, guys are taking this bye week very seriously as far as understanding where we need to be when we come back, the improvements we still need to make and how we can just keep this thing going.”

New York is tied with Miami in the division, a half-game behind Buffalo, so the AFC East is very much up for grabs. Not only that, the Jets hold the No. 5 overall playoff spot in the conference.

Sure, there are eight more games to play, including one each against their division rivals, but the reality is the Jets are currently positioned to be a playoff team.

Coming out of training camp, the Jets appeared to have much more talent than they've had in several seasons. But success seemed a year away, especially with such a young — but talented — roster.

New York has positioned itself now to make a second-half run at ending the NFL's longest postseason drought at 11 seasons. But Wilson said the Jets aren't entertaining the thought that if they continue doing what they've done, the playoffs are a possibility.

“Not in that way,” the second-year quarterback said. "Kind of the way you're saying it almost makes it sound like we didn't expect to be here, but, hey, wow, we are, so let's see if we can keep doing it.

“But for us, we expected to be here.”

The formula for success has become clear for the Jets: a ground-and-pound running game, coupled with limiting mistakes by the quarterback — combined with an aggressive, opportunistic defense that ranks among the best in the league.

“It's been fun,” Saleh said. “The first half of the year, even the most optimistic Jets fan wouldn't have had us at 6-3. But at the same time, we've got a great opportunity coming up in the second half of the season. ... It doesn't mean anything if we don't attack the second half in the same exact manner.”

The defensive line has been a positive all season. Led by Quinnen Williams, Carl Lawson and John Franklin-Myers, the big guys up front have been providing consistent pressure. New York's five-sack performance against Buffalo was just the latest example. Since Week 4, the Jets are first in the NFL with 52 quarterback hits and rank among the league leaders in sacks (21) and tackles for loss (27).

Wilson is still developing and the Jets need to do all they can to make sure he maintains his confidence and doesn't force plays — as he did in the loss to New England two weeks ago. He was roasted by many fans and media for his three-interception game against the Patriots. But offensive coordinator Mike LaFleur drew up a solid game plan against the Bills, one that allowed Wilson to get in rhythm and use the running game to his advantage. For all his struggles, Wilson has no interceptions in four of his six games this season.

The rookie class. The Jets were excited when they got cornerback Sauce Gardner, wide receiver Garrett Wilson and defensive end Jermaine Johnson in the first round, and then they traded up in the second round to draft running back Breece Hall. All were key contributors in the first half of the season, providing New York with a promising young core.

Elijah Moore. The second-year wide receiver remains one of the Jets' more intriguing story lines. After a solid rookie season during which he caught 43 passes and appeared to be a key playmaker, Moore saw his opportunities dip early this year. Frustrated, he requested a trade — which the Jets insisted they would not grant — and still appears to be an odd man out. Moore had zero targets against the Bills despite playing 27 snaps on offense.

The offensive line has been hit hard, with tackle Mekhi Becton and guard/tackle Alijah Vera-Tucker both out for the season, and tackles Duane Brown, George Fant and Max Mitchell all spending time on injured reserve. The loss of Hall for the season to a torn ACL was a huge blow for a player who appeared to be an early front-runner for offensive rookie of the year. Defensive tackle Sheldon Rankins will likely miss a few weeks with an elbow injury.

3-3 — The Jets' record in games during which they have trailed by double-digits. It matches the number of victories in those situations (3-40) over the previous four seasons combined.

Playoffs or bust? Sounds a bit extreme, especially for a team that hasn't sniffed the postseason in so long. But the Jets can certainly announce themselves as legitimate contenders with strong showings out of the bye in games at New England, at home against Chicago and at Minnesota and Buffalo.