Jets' Quinnen Williams off to dominant start in 4th season 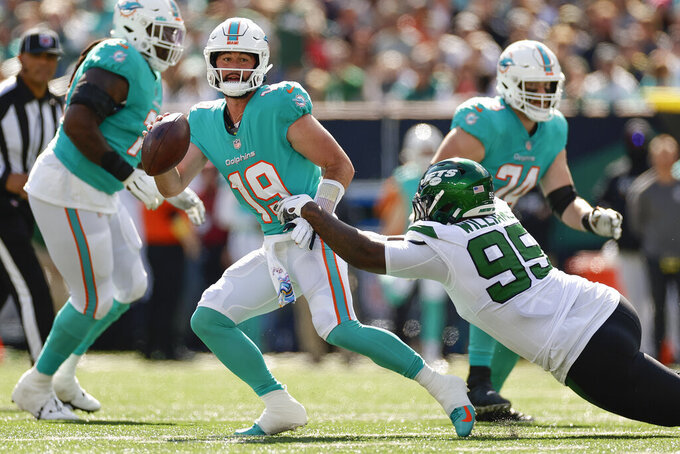 The New York Jets defensive tackle was faster, stronger and more explosive off the snap. Practice after practice.

“Probably about three weeks into camp, I pulled him aside,” Rankins recalled Wednesday. "And I was like, ‘Just do this — all year. Just do that. Don’t do nothin' else. Just do this.'

Williams has been the Jets' most consistently good player during the team's surprising 4-2 start. After a mostly solid first three seasons since being drafted No. 3 overall out of Alabama in 2019, Williams has teammates, coaches and observers around the league taking notice.

“Let me tell you, man, that dude works his tail off,” defensive end Vinny Curry said. “He deserves everything that’s coming his way. I’m just so happy for him. Like I told him before, he was having a Pro Bowl season. But I think after (Sunday's) game, I guess we all can agree he's having an All-Pro season.”

Curry was referring to Williams' performance in the Jets' 27-10 victory at Green Bay, during which the D-lineman had two sacks, three tackles, a forced fumble, two quarterback hits, a tackle for loss and a blocked field goal. It resulted in him being selected the AFC defensive player of the week.

“I did feel very good coming into this training camp,” said the 6-foot-3, 303-pound Williams, who came in much slimmer than the previous summer when he was still recovering from offseason foot surgery. “I felt confident in my conditioning, felt confident in my training and felt comfortable in the scheme.”

And it has shown.

There were times during Williams' first three seasons when he would flash his power and speed in games, and then somewhat fade or mix into the defensive line shuffle.

This season, Williams has been a force — a presence for whom offensive coordinators have to scheme.

“Between the whistles, he's still smiling and the same old Quinnen,” Rankins said. “That's just who he is. But when the ball's snapped, it's pure dominance.”

Talk to most people about Williams the past several weeks and they'll all inevitably use the word “dominant.” He has spoken in the past about trying to reach that level, but refuses to acknowledge he's there right now.

No matter how many people say he absolutely is.

“I definitely haven't gotten to that word just yet, man,” Williams insisted. “Just because of all the learning I have to do, all the different things I want to do and want to accomplish and want to become. ...

"But I definitely feel like I'm on the right path to becoming dominant, but not there just yet."

It's just tough to convince everyone else of that.

Along with Williams' five sacks — which have resulted in 43 1/2 lost yards — he has 11 quarterback hits, a pass defensed, a forced fumble and a fumble recovery this season.

“Quinnen is playing at a different level,” coach Robert Saleh said. “We’re only six games in, but he’s got to continue that. He’s got 11 more left, but he keeps doing this, there’s no reason why he shouldn’t be Pro Bowl, All-Pro — all the different accolades you can get. He’s playing at that type of level.”

Including on special teams.

But is blocking a field goal as sweet as a sack?

“Not quite,” Williams said with a big laugh. “Getting a sack’s way better.”

How about a stiff-arm? Like the nasty one he put on Tyreek Hill when he recovered a fumble against Miami two weeks ago.

“A sack overrules anything,” Williams said. “You get to dance and do all this fun stuff.”

To his credit, Williams has routinely attributed his success to the play of teammates on the D-line, including Rankins, Carl Lawson, John Franklin-Myers and others.

Poring over game and practice film has, too, and correcting his mistakes — rather than celebrating his successes.

“I think it's more like self-constructive criticism, like, self reflecting and different stuff like that,” Williams said. “I look at myself every single day and I know the player that I want to become.”

Williams, who's potentially setting himself up for a hefty payday next offseason, mentioned Aaron Donald, Fletcher Cox and Chris Jones as defensive linemen who have been consistent stars at their peak.

And that's a scary thought for opponents.

“Listen, I honestly think there's potential there for him to be Defensive Player of the Year,” Curry said. “If he just keeps doing what he's doing, keeps attacking the practices and playing at that high level, man, sky's the limit for him.”