Jets say their fortunes are changing and it's not just talk 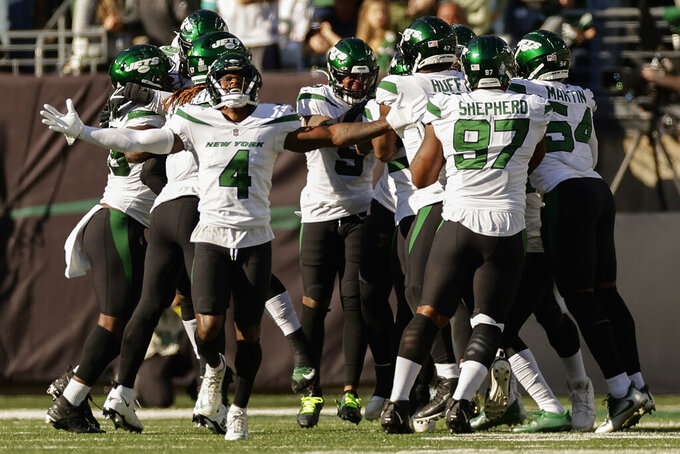 New York Jets cornerback D.J. Reed (4) celebrates with teammates after defensive tackle Quinnen Williams (95) recovered a fumble and ran it back down the field inside the Miami Dolphins five yard line during the fourth quarter of an NFL football game, Sunday, Oct. 9, 2022, in East Rutherford, N.J. (AP Photo/Adam Hunger)

FLORHAM PARK, N.J. (AP) — Robert Saleh and the New York Jets would tell anyone who'd listen over the past several months that things were changing with the franchise.

Negative energy was being replaced by positive vibes. Caution was giving way to confidence.

And now, losses are getting shoved aside by victories.

The Jets are 3-2 after a dominant 40-17 win over the AFC East-rival Miami Dolphins on Sunday. They're not exactly among the NFL's powerhouses just yet. But progress is breeding optimism — and that's not something anyone has been able to say around the team in quite a while.

“We have a long way to go, let’s be very clear,” wide receiver Braxton Berrios said. "But we’re trying to turn these pages left and right. Being good in the fourth quarter, winning those close games, being in those moments that we know and love, and then pulling away from teams.

“These are all stones that were starting to turn. And it’s been different since the day this whole staff got here. And now it’s finally showing a little more.”

There was the 24-20 comeback victory at Pittsburgh, led by quarterback Zach Wilson in his season debut. That was followed by the win over Miami that snapped New York's 12-game skid against division rivals.

For quite a few years, all the Jets have been known for is losing. Their 11-year postseason drought is the longest active skid in the league.

Ending that this year is the expectation and focus. But now comes the hard part: being consistent winners and regularly good. The Jets' previous three-game winning streak, which they'll be trying to match in Green Bay on Sunday, was in 2019.

The game Sunday was close — 19-17 — in the fourth quarter, until both the offense and defense took over and scored 21 unanswered points. The Jets put an opponent away, and that was another sign of progress that might not have happened in recent seasons.

“We have a young group that doesn't flinch,” Saleh said. “When we get a chance in the fourth quarter, I mean, you just don't have any quit.”

It’s still only October optimism, but it’s a chance for the Jets to build upon success and keep it going the next few months.

The pass rush is making its impact felt, even if the sack totals aren't eye-popping. The Jets had two sacks Sunday, including Carl Lawson's strip-sack of Skylar Thompson that helped seal the game. But they also were credited with 16 quarterback hits, with Lawson getting seven — the most in a game by a Jets player since 1970. John Franklin-Myers had five quarterback hits. He and Lawson join Cleveland's Myles Garrett and Jadeveon Clowney as the only teammates to each have at least five in the same game in the past two seasons.

While the pass rush is thriving, the run defense is struggling a bit. The Jets gave up 137 yards rushing against the Dolphins, including 113 by Raheem Mostert. That came after they allowed 113 at Pittsburgh.

RB Breece Hall. The rookie second-rounder has been nicknamed “Beast” since his high school days for his combination of physical style and speed. All of that was on display Sunday when he set a Jets rookie record with 197 all-purpose yards — 100 yards receiving on two catches and 97 yards rushing and a TD on 18 attempts. He also dragged a few defenders on some of his plays.

Doom and gloom. It would've been easy for Jets fans to panic a few weeks ago when the Jets were drubbed by the Cincinnati Bengals 27-12 in Week 3 to drop them to 1-2. It was a case of “here we go again,” and understandably so. But this squad has shown an ability to bounce back from adversity — something that has been a bit uncharacteristic of recent New York squads.

Rookie DE Jermaine Johnson is day to day with an ankle injury. Saleh said the Jets will know more by the end of the week, but the team doesn’t think it’s severe.

58 — The Jets have outscored opponents 58-20 in the fourth quarter, including the 21 points they scored Sunday against Miami. The 58 points are the most by any team in the final quarter this season.

The Jets get another chance to prove they're for real Sunday when they head to Lambeau Field to take on the Packers. Saleh is close friends with coach Matt LaFleur, whose brother Mike is New York's offensive coordinator. There's plenty of familiarity there, but it'll likely come down to how the defense handles Aaron Rodgers after putting away rookie Kenny Pickett and Skylar Thompson the past two games.