Jets' season still all about Zach Wilson, whenever he's back 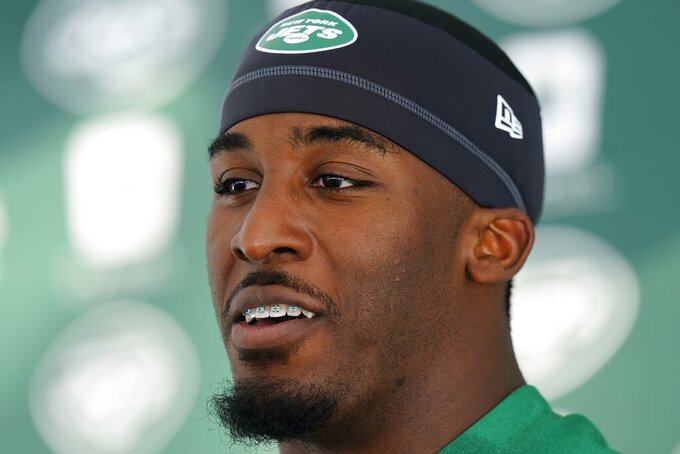 The second-year quarterback suffered a bone bruise and torn meniscus during the second series of the preseason opener, putting his availability for Week 1 of the regular season in jeopardy. Wilson, who had arthroscopic surgery to repair the meniscus, was expected to be sidelined two to four weeks — but likely more.

The good news? He should be back early in the season. And when he does, all eyes will be on Wilson, who is being counted on to take a major leap from his rookie year. Just as long as he's healthy.

“I'm definitely more comfortable within the offense, for sure, and just what the NFL game offers,” Wilson said before the injury. “Just never been more excited to play football this year. I’m really excited to go into the season.”

Wilson is coming off a down-and-up rookie season after being the No. 2 overall draft pick. He struggled mightily early, missed four games with a sprained PCL in his right knee — the same one he hurt this summer — before coming back and showing promise.

The overall numbers weren't eye-popping — nine touchdowns and 11 interceptions — but he had no picks in his final five games. That was an indication he was making progress mentally. And before his knee injury this summer, he was putting together consistently solid days during camp.

“He's getting more comfortable, getting more confidence out there,” wide receiver Corey Davis said. “He's taking charge of the huddle and taking some real good steps.”

The concern, however, is the snaps Wilson missed while unable to practice or play in the final preseason games.

“He’s got to stay dialed in just like he was last year when he was hurt, learn from his teammates and try to be involved as much mentally as he can possibly be,” coach Robert Saleh said. “The timing of it all is terrible and it sucks, but I think Zach can still have an opportunity to grow from it if he attacks it mentally.”

While New York has two capable backups in 37-year-old Joe Flacco, who figures to start at least the regular-season opener, and Mike White, the Jets need to see Wilson as much as they can this season.

Or the question of whether they have their quarterback of the future might go answered heading into another offseason of uncertainty — especially if the Jets don't snap their 11-year postseason drought.

The Jets were busy on the first day of the draft, taking cornerback Ahmad “Sauce” Gardner at No. 4 overall, wide receiver Garrett Wilson six picks later and then trading up to grab defensive end Jermaine Johnson at No. 26.

All three have a chance to make immediate impacts as rookies.

Gardner was competing with Bryce Hall for the starting gig opposite D.J Reed and was impressive during training camp. Wilson is an athletic playmaker who should quickly complement Corey Davis and Elijah Moore. Johnson is part of a talented D-line and flashed his pass rushing skills late in camp.

Then there's second-round running back Breece Hall, who could form a versatile 1-2 punch out of the backfield with Michael Carter. Hall was one of the Jets' most electric players throughout the summer.

The Jets thought their revamped offensive line was in place until Mekhi Becton was lost for the season with a knee injury.

Becton was slated to play right tackle with George Fant staying on the left side. But Becton's injury forced Fant to the right side when New York signed five-time Pro Bowl left tackle Duane Brown. Fant has been eased in after offseason arthroscopic knee surgery, while Brown needed time to get back in playing shape.

“I have all the confidence in the world,” offensive coordinator Mike LaFleur said, “that the five that we put out there are going to figure it out by the time we get to Baltimore.”

Jeff Ulbrich's defense ranked at the bottom — or close to it — in several categories last season. The return of defensive end Carl Lawson could provide a big-time boost.

After missing last season with a ruptured Achilles tendon, Lawson has shown the speed and power off the edge the Jets expected when they signed him to a three-year, $45 million deal in March 2021.

It has been a while, but the passing game might prominently feature the tight end.

Maybe two of them.

The Jets signed C.J. Uzomah and Tyler Conklin in free agency, giving them two players with lots of pass catching experience. That's something that has been rare for New York at that position over the last 10 years. And Conklin quickly developed a rapport with Wilson in camp before continuing to catch everything thrown his way by Flacco.

“It should be fun,” Uzomah said, "and it should open up the offense a lot with both of us.”