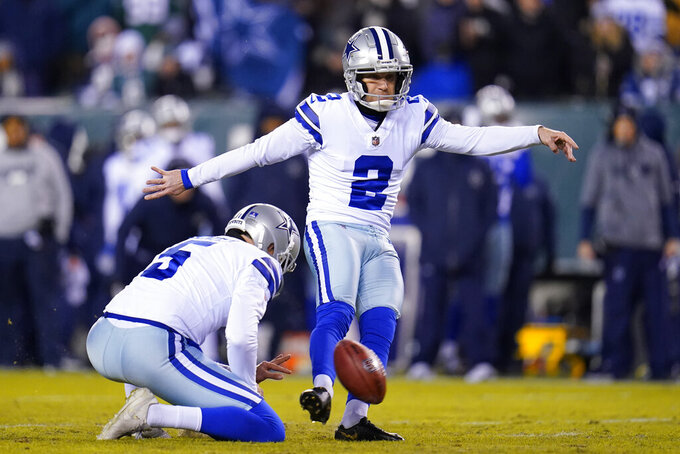 The 34-year-old Zuerlein, nicknamed “Greg the Leg,” heads to New York after spending the last two seasons in Dallas. The Athletic reported Saturday the contract is worth up to $2.75 million.

Zuerlein joins Eddy Pineiro, who was tendered a one-year, $2.43 million restricted free agent contract offer last week. The Jets have the right of first refusal if another team tries to sign Pineiro.

The kicker spot has been shaky lately for New York, which has had Pineiro, Matt Ammendola, Alex Kessman, Sam Ficken, Sergio Castillo, Chase McLaughlin and Kaare Vedvik all play in games the last three seasons.

The Jets entered last year with two unproven kickers who had little NFL experience with Ammendola beating out Chris Naggar in training camp. But Ammendola struggled and was replaced by Kessman, who missed two extra points in his only game. New York then signed Pineiro in December and the 26-year-old veteran provided stability, going 8 for 8 on field goals and 9 for 10 on extra points.

Ammendola also remains on the Jets' roster after signing a reserve/futures deal in January.

Zuerlein was a sixth-round pick of the Rams in 2012 out of Missouri Western State. He has one of the strongest kicking legs in the league and had a career-best 61-yard field goal in 2015. Zuerlein was a first-team All-Pro two years later, when he also made his only Pro Bowl team while making 38 of 40 field goal tries.

He was signed to a three-year, $7.5 million contract by Dallas as a free agent in 2020 but was cut by the Cowboys earlier this month. Zuerlein made 29 of 35 field goals but missed a career-worst six extra-point attempts last season. For his career, Zeurlein has made 82.2% of his field goals.