Jets woeful offense gets worse in 35-9 loss to Chiefs 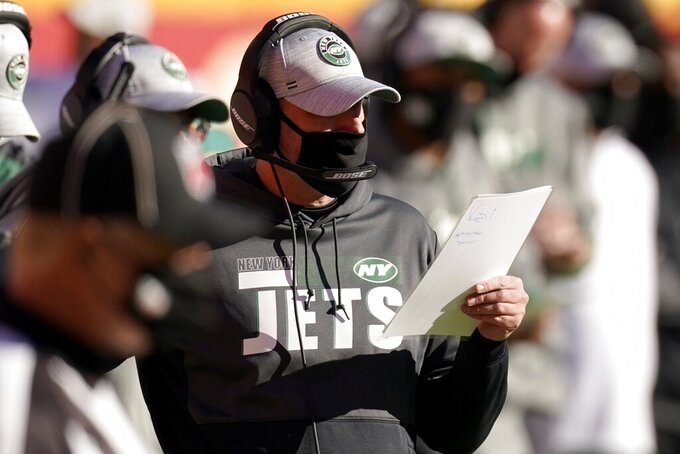 KANSAS CITY, Mo. (AP) — The winless New York Jets have been historically awful on offense through the first eight games of the season.

Lately, they've been even worse after halftime.

After showing a bit of moxie in marching for a trio of first-half field goals Sunday, Sam Darnold and his banged-up bunch of playmakers were shut out by the Kansas City Chiefs in the second half of a 35-9 blitz. The meltdown followed a loss to the Buffalo Bills last week in which the Jets managed a mere 4 yards — 12 feet — after the break.

“We knew what kind of game we had to play,” said Jets coach Adam Gase, whose reputation as an offensive wunderkind was burnished by helping the 2013 Broncos set the NFL scoring record on their way to the Super Bowl. “We did a lot of what we talked about earlier in the game with the time of possession and getting first downs.”

They just didn't carry the meager success into the second half.

Over the first 30 minutes, the Jets (0-8) managed to run 34 plays, gain 158 yards and keep within striking distance of one of the league's dynamic offenses. If Sergio Castillo had connected on his 47-yard field goal before halftime — rather than getting it blocked by Armani Watts — the Jets would have trailed just 21-12 headed to the locker room.

“We had some big conversions on some fourth downs,” Gase said, “but we ended up giving up a fake punt where that gives them extra possessions, which is not what we needed to do. Then we had a blocked field goal. We were still able to go into halftime down 21-9, but when you play these guys, you have to trade touchdowns and we're kicking field goals.”

Field goals are better than nothing, though. That's what the Jets got the rest of the way.

The Jets went three-and-out on five of their first six possessions of the second half. The other ended with a fumble by beleagured tight end Chris Herndon.

“The fumble killed us, just momentum-wise and being able to get down the field,” said Darnold, who has been dealing with a shoulder injury but said he came out of the game feeling fine. "For us, we were on a good drive there and if we hopefully score seven there, it’s a different ballgame.”

But it still takes scoring more than 11.75 points in a game, which is what the Jets are averaging at the halfway point of the season. That's not quite on par with some of the worst teams in NFL history, including the record of 7.4 points set by the 1977 Tampa Bay Buccaneers. But it would still fall within the 25 worst seasons of any offense.

“There’s a lot of things we have to do better," said Gase, who at least tried something new when he yielded play-calling duties to offensive coordinator Dowell Loggains for the second consecutive game. “We have to execute better. We’ve got to play a better game, especially against that squad right there.”

By Ralph D. Russo 45 minutes ago
By The Associated Press an hour ago
an hour ago
2 hrs ago
3 hrs ago