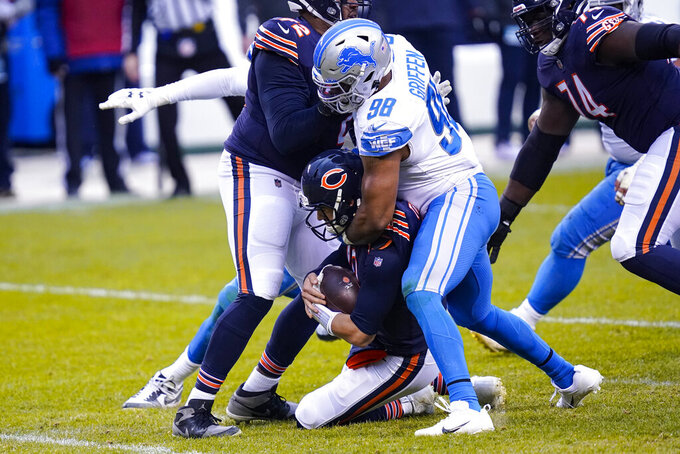 The Atlantic Coast Conference says Sunday's women’s basketball game between Duke and Miami has been postponed as part of multiple schedule adjustments.

The league announced the changes Saturday night. The postponement follows contact tracing within the Duke program after the Blue Devils played No. 2 Louisville on Wednesday night. Two days after that game, the ACC announced the Cardinals’ home game against North Carolina set for Sunday was postponed due to coronavirus issues within the Cardinals program.

The ACC says UNC will now visit Miami on Monday, and the teams’ Jan. 10 meeting with be played in Chapel Hill.

Additionally, Florida State will travel to Clemson on Thursday instead of visiting Louisville. That replaces the Dec. 31 meeting at FSU while the Seminoles will host the Tigers on Jan. 17.

Detroit Lions defensive end Everson Griffen was placed on the COVID-19 list a day before he was expected to play a key role against Green Bay.

The Lions announced Griffen is on the list created for players who either test positive for the coronavirus or have been in close contact with an infected person. The team says no other players were affected by the league’s coronavirus protocols going into its home game against the Packers on Sunday.

The Lions acquired Griffen from Dallas in October and he has 2 1/2 sacks and three passes defended in five games.

Miami Dolphins leading rusher Myles Gaskin went the COVID-19 list Saturday, a blow to the playoff-contending team on the eve of its game against Kansas City.

Running backs Matt Breida (COVID-19 list) and Salvon Ahmed (shoulder) were already sidelined. DeAndre Washington and Patrick Laird are expected to get the bulk of the carries against the Chiefs.

Miami elevated running back Elijah McGuire for the game, along with tight end Chris Myarick and defensive end Tyshun Render.

The Dolphins rank last in the NFL with an average of 3.7 yards per carry.

California’s game at Washington State was canceled less than two hours before kickoff on Saturday because of a case of COVID-19 on the Cal team, the Pac-12 said.

It’s the third Washington State game that has been postponed or canceled because of the coronavirus pandemic.

Cal was not able to field enough scholarship players to meet the minimum threshold in order to play the game, the Pac-12 said. The Golden Bears had one player test positive and then additional players were sidelined because of contact tracing.

The case was confirmed via a PCR test on Saturday, the league said. The game was declared a no contest.

Cal (1-3) and Washington State (1-2) are struggling to qualify for postseason play. Neither team has an opponent set for next weekend.