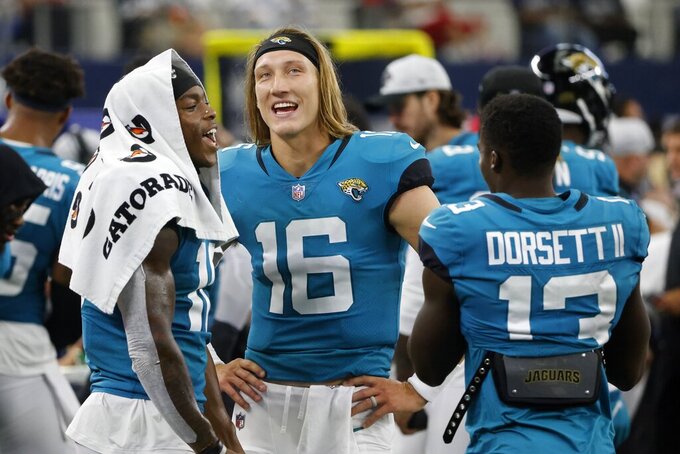 ARLINGTON, Texas (AP) — Trevor Lawrence took the reps coach Urban Meyer said he needed, and now has a taste of success going into the regular season.

Jacksonville's rookie No. 1 overall pick completed 11 of 12 passes for 139 yards and two scores in three possessions against Dallas backups, and the Jaguars beat the Cowboys 34-14 in a preseason finale Sunday.

The former Clemson star had just one field goal to show for eight drives in his first two exhibition games. Lawrence changed that quickly four days after Meyer named him the starter, and a day after the Jaguars traded likely backup and fan favorite Gardner Minshew.

“I think we just executed a lot better than we have the past two games,” Lawrence said. “Builds a lot of confidence going into the season. It’s nice to finish the preseason with a game like that.”

Pharoh Cooper caught Lawrence's first TD toss on the opening possession for Jacksonville (1-2), an 18-yarder on the sideline in the end zone that was set up by a 38-yard toe-dragging catch from Phillip Dorsett II.

After a short touchdown run from Carlos Hyde was called back by a holding penalty, Lawrence connected with Laviska Shenault Jr. on a 4-yard out in the end zone for a 14-0 lead early in the second quarter.

The Cowboys (0-4) needed the final preseason game to decide whether Cooper Rush, Garrett Gilbert or perhaps somebody outside the organization will back up Dak Prescott.

While Gilbert bounced back from a rough outing to lead an 80-yard drive capped by his 19-yard scoring toss to Aaron Parker, Rush didn't do anything to damage the edge he seemed to create by outplaying Gilbert a week earlier.

Rush was 4 of 8 for 16 yards in three scoreless possessions, while Gilbert finished 9 of 16 for 87 yards with the score. QB coach Doug Nussmeier ran the offense instead of offensive coordinator Kellen Moore, a twist Dallas coach Mike McCarthy likes to use late in the preseason to give other coaches play-calling experience.

“I’m proud of what I put on tape,” said Gilbert, who didn't make his first career start until last season, six years after he was drafted and now finds himself on the roster bubble again. “Those decisions are out of my hands. I’m just going to worry about what I can control.”

In explaining why the future of the franchise would play in a preseason finale, Meyer said Lawrence simply needed the reps. The coach said the staff almost decided to sit Lawrence because five of the top offensive linemen were out, but ultimately decided he needed the playing time.

Mixing mostly quick drops and rollouts, the Jaguars kept their prized QB out of harm's away except for Ron'Dell Carter's roughing penalty when he appeared to make contact with Lawrence's facemask on a hit just as the QB threw a pass.

“One thing about Trevor, he’s played decent all three games,” Meyer said. “I would judge our preseason, it’s a success right now. There’s a lot of energy in the locker room.”

C.J. Beathard, the presumed backup to Lawrence after Minshew was sent to Philadelphia for a late-round draft pick, took over in the second quarter and directed a drive to Josh Lambo's 45-yard field goal in the third quarter. Jake Luton was 16 of 18 for 137 yards with an 11-yard scoring toss to Laquon Treadwell that capped an 80-yard drive in the third.

Dallas defensive coordinator Dan Quinn was still away from the team eight days after he was sent home from the stadium before a 20-14 preseason home loss to Houston following a positive COVID-19 test. Quinn wouldn't detail the process of returning this past week, but told reporters he expected to be back soon.

The Cowboys still have four players out because of health and safety protocols. All are projected starters in receiver CeeDee Lamb, left guard Connor Williams, defensive tackle Carlos Watkins and safety Damontae Kazee. Players will be off several days to start the week before preparations begin for the Sept. 9 opener at Super Bowl champion Tampa Bay.

Dallas rookie safety Israel Mukuamu had the game's only interception, off Beathard, but also gave Jacksonville a first down on third-and-30 when he grabbed Devine Ozigbo's facemask trying to make the tackle on a short pass. Treadwell's TD catch came six plays later. Ozigbo scored on a 3-yard run late and had 68 yards rushing.

Newly signed Jacksonville receiver Devin Smith, who kept a once-promising career alive with a solid showing for the Cowboys two years ago, made a spectacular diving catch for a 45-yard gain in the second quarter. Smith played for Meyer at Ohio State.