Lions' Campbell keeps taking risks; results not there yet 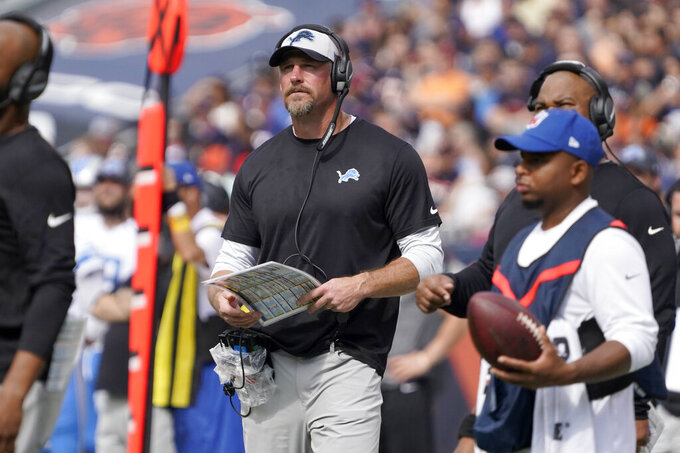 Detroit Lions head coach Dan Campbell watches his team from the sidelines during the second half of an NFL football game against the Chicago Bears Sunday, Oct. 3, 2021, in Chicago. (AP Photo/David Banks)

The first-year Detroit Lions coach, who is still seeking his first win, has gone for it on fourth down a league-high 10 times, including twice in Sunday's 24-14 loss to Chicago.

Problem is, the Lions didn't convert either of those fourth-down opportunities, both of which they tried from field-goal range. That continues a trend for Detroit (0-4), which has succeeded on 3 of 10 fourth-down plays, a rate that ranks 25th in the league.

The problem, players say, is their execution. They appreciate the coaching staff’s trust in them, but it’s up to them to prove the decision was correct.

“I respect coach (for) believing in us to get those fourth-and-ones, third-and-shorts, and I know we can execute,” receiver Quintez Cephus said. “We just have to continue to keep honing in on those small details.”

The numbers suggest Detroit's problems run deeper than a lack of execution. The Lions have gotten largely mediocre play from quarterback Jared Goff, who is averaging 6.8 yards per attempt, and they lack reliable weapons on the outside. Running back D'Andre Swift and tight end T.J. Hockenson are the Lions' leading receivers.

Detroit's roster has been depleted by injuries, further narrowing its margin for error. The team had another big setback on Sunday when its best outside linebacker, Romeo Okwara, suffered an Achilles tendon injury that will end his season.

Running back Jamaal Williams has been a solid free-agent pickup. He rushed for 66 yards on 14 carries on Sunday and is averaging 4.5 yards per carry, a career high for the five-year veteran. But he had only two carries in the second half against the Bears, a casualty of the Lions falling behind on the scoreboard.

The Lions allowed the Bears to rush for 188 yards. Campbell said the defense was undisciplined and players' fundamentals were “falling apart a little bit.”

Kalif Raymond had 68 yards receiving in the prior week's loss to the Ravens and caught two touchdown passes against the Bears. Raymond, who credited his increased chemistry with Goff, could potentially be a difference-maker for Detroit if he builds on those performances.

Cornerback Bobby Price, who converted from safety in training camp, was consistently picked on by rookie Bears quarterback Justin Fields. Price was the closest defender on Fields’ three biggest passing plays: 64 yards and 32 yards to Darnell Mooney and 28 yards to Allen Robinson.

In addition to losing Okwara for the season, Pro Bowl center Frank Ragnow suffered a toe injury that Campbell said will likely hold him out of this Sunday's game.

4: The number of red zone trips from the Lions' offense on Sunday that resulted in zero points. Detroit got inside the Bears 10-yard line on each of those possession. Detroit fumbled twice, including a play on which Jared Goff approached Ragnow to communicate with his offensive linemen, but Ragnow unexpectedly snapped the ball. The snap then caromed off Goff and into the hands of Bears defensive lineman Bilal Nichols.

The Lions will travel to Minnesota (1-3) in search of their first win. The Vikings have struggled to put a full game together, but their defense is starting to get its footing, allowing one touchdown in its last six quarters.