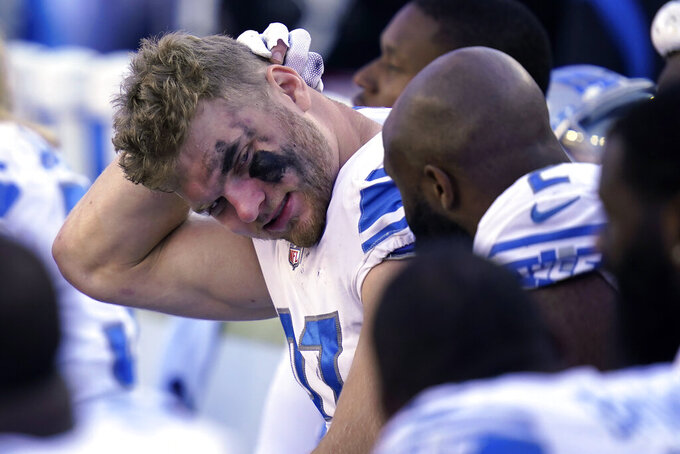 Detroit Lions defensive end Aidan Hutchinson, center left, speaks with teammates on the bench in the closing moments of the fourth quarter in an NFL football game against the New England Patriots, Sunday, Oct. 9, 2022, in Foxborough, Mass. (AP Photo/Charles Krupa) 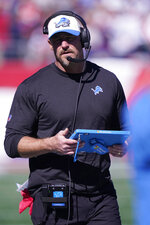 ALLEN PARK, Mich. (AP) — The Detroit Lions are 1-4 with one of the worst defenses in the league and Jared Goff is too mistake-prone to save them.

If coach Dan Campbell’s team — which has a bye this week — is going to salvage anything out of yet another poor start, it's going to be the running game that makes it happen.

The Lions have run the ball on 43% of their offensive plays, slightly less than the league average of 44%.

However, they’ve been successful on those carries, with a 5.4-yard average that ranks second in the league behind the Seattle Seahawks.

The Patriots shut out the Lions last weekend, but Detroit still managed 101 yards on the ground without two of its top playmakers.

D’Andre Swift, who missed two of the first five games with ankle and shoulder problems, is averaging 8.6 yards per carry and more than 100 rushing and receiving yards per game. He’s also one of three Lions to have scored a rushing touchdown of at least 50 yards this year.

The second is receiver Amon-Ra St. Brown, who saw limited duty against the Patriots while trying to play through a high ankle sprain. He’s only carried the ball twice, but one of those went for 58 yards. The threat of him taking a jet sweep for another big gain limits what defenses can do to stop Swift.

“I felt like I could play, and I knew I would get a lot of rest during the bye week, so I wanted to try to help the team,” St. Brown said. “I thought we moved the ball well, but the turnovers hurt us. We were playing a game where field goals weren’t going to be enough, but they stopped us on fourth downs.”

While Swift and St. Brown have battled injuries, Jamaal Williams has been a steady presence. He’s averaging 66 yards per game at 4.3 yards per carry, and he’s scored six touchdowns.

The Lions have rushed for seven touchdowns — plus two more scoring receptions by running backs — without a turnover from that position group.

Three of Goff’s turnovers — two interceptions and a fumble — have been returned for touchdowns, putting Detroit’s defense into an even bigger hole.

“It’s always costly to turn the ball over at any time, but whenever it results in a six, it is even worse,” Goff said after the Patriots scored on a fumble return in their 29-0 win on Sunday. “Obviously, as a quarterback, turnovers are a part of the business, but you have to find a way to limit them. I have to be better there.”

The big mistakes leave the defense with no room for error. That’s not great for a unit that’s allowing a league-worst 34 points and second-worst 428 yards per game entering Week 6.

“To win in this league, we have to play complementary football in all three phases of the game,” linebacker Alex Anzalone said. “I feel like there are times we have, like against Washington and a few other instances throughout the season, but that’s what is really hurting us. When the offense has been clicking, the defense hasn’t and vice versa.”

A year ago, the Lions were 0-8 going into their bye. This season, when they were being touted as a possible breakout contender, they are 1-4.

That’s what led Campbell to say his team had hit “rock bottom” after losing to New England, and his players aren’t inclined to argue.

“One and four going into the bye — that’s horrible. It’s disgusting,” safety DeShon Elliott said. “We have still not made any strides. We have to be better than this.

“If we want to be a great team, we have to bounce back, and that starts with the first game after the bye.”