Loss to Cardinals latest setback in rough season for 49ers 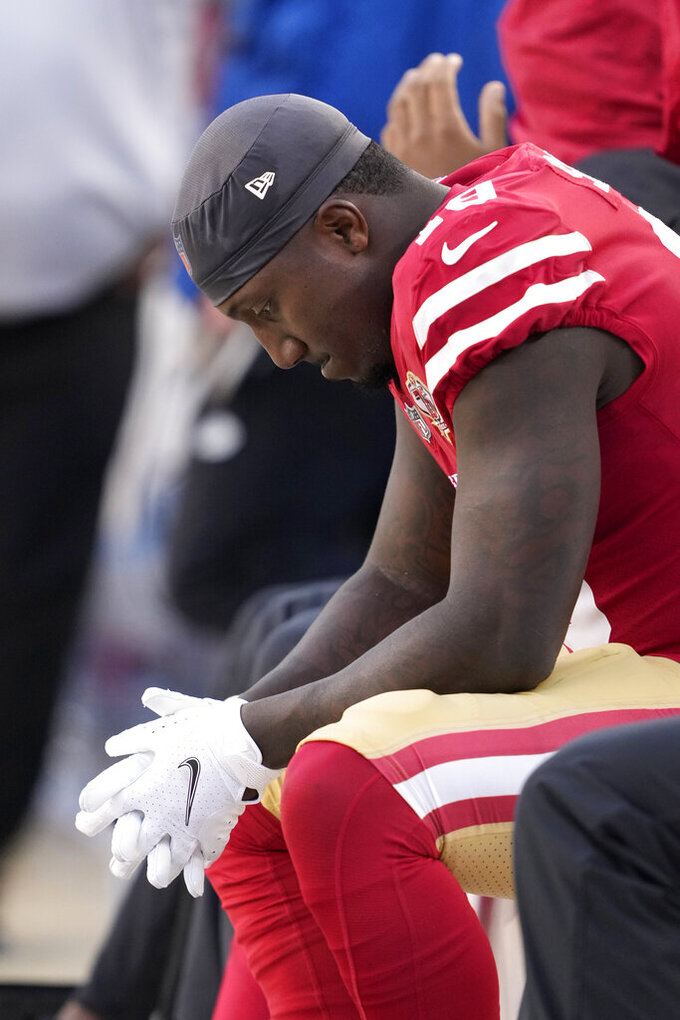 San Francisco 49ers wide receiver Deebo Samuel sits on the bench during the second half of an NFL football game against the Arizona Cardinals in Santa Clara, Calif., Sunday, Nov. 7, 2021. (AP Photo/Tony Avelar) 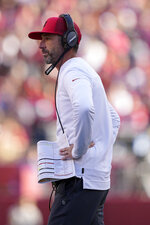 SANTA CLARA, Calif. (AP) — A season that began with talk of the San Francisco 49ers returning to their 2019 form that took them to the Super Bowl has instead looked a lot more like Kyle Shanahan's other four seasons as coach.

Injuries to key players and sloppy play have left the Niners (3-5) mired in the bottom half of the standings looking up at contenders such as Arizona and the Rams following a 31-17 loss Sunday to a short-handed Cardinals team missing Kyler Murray and other key playmakers.

This isn't what the Niners expected after opening the season with back-to-back road wins.

“It is surprising because I think we do have the right people in the building, coaches and players,” defensive end Nick Bosa said. “I don’t think that’s the issue at all. But obviously, we’re not executing at the right times and it just shows how competitive the NFL is and how small the margin of error is.”

The biggest move the 49ers made this offseason came when they traded three first-round picks to take Trey Lance third overall to be the quarterback of the future.

San Francisco opted to keep Jimmy Garoppolo with his high salary because Shanahan and general manager John Lynch believed Lance needed time to develop and that the roster was capable of getting back to the Super Bowl with a healthy Garoppolo.

That hasn't been the case so far as the defense has struggled at times with Sunday's loss to the Colt McCoy-led Cardinals the worst performance yet, and the offense hasn't hit its 2019 level of efficiency.

While Garoppolo is coming off his best back-to-back games of the season, it hasn't been good enough to overcome the other issues.

“I know that we can play a lot better football, that’s for sure,” Shanahan said. “I know we’re a 3-5 team right now. I believe that we should be a better team than that record and I know that starts with me.”

Offensive line. There hasn't been a lot of positives, but the offensive line has been mostly good this season thanks in large part to star left tackle Trent Williams. Center Alex Mack has been a big addition in the middle and left guard Laken Tomlinson and right tackle Mike McGlinchey have been much improved from last season, although McGlinchey is now out for the season with a torn quadriceps.

Third-down offense. The Niners have converted only 33.3% of their third downs, ranking third worst in the NFL. They have actually done a decent job on third-and-long, ranking seventh best when needing at least 8 yards (29.5%). That's a better conversion rate than San Francisco has in third-and-medium (26.1% when needing between 4 and 7 yards).

WR Deebo Samuel. He has developed into a top receiver after being used more as a gadget player his first two seasons. Samuel has 49 catches for 882 yards. He ranks second in the NFL in yards receiving and has the most for the Niners through eight games, besting Jerry Rice's record of 869 in 1989.

Shanahan. He has earned a reputation as one of the game's best play-callers but his results as head coach haven't been nearly as good. He has a 32-40 record and has posted just one winning season since he arrived in 2017.

The most consequential injuries so far came in the opener when running back Raheem Mostert and cornerback Jason Verrett were lost to season-ending knee injuries. ... McGlinchey is now out for the year and DE Dee Ford went back on IR last week with recurring back issues.

Minus-9 — The Niners are tied for the second worst turnover margin in the NFL in what has become a recurring issue under Shanahan. San Francisco's minus-44 turnover margin since Shanahan arrived is 11 worse than the next worst team in that span.

The 49ers host the Rams on Monday night. San Francisco still has road games remaining with Seattle and the Rams, as well as against Tennessee and Cincinnati.