Mahomes the rare quarterback with no weakness 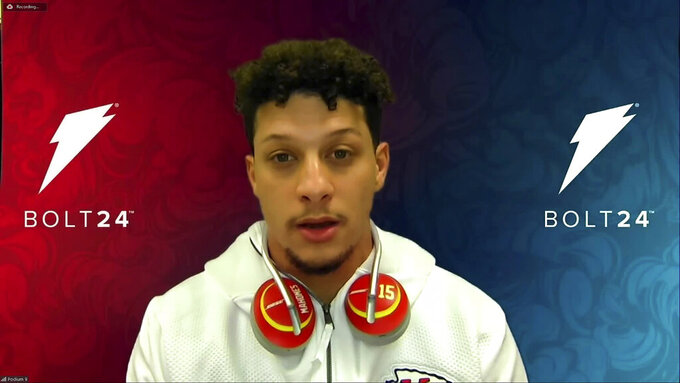 When it comes to judging the best quarterbacks, they all seem to have at least one deficiency.

Whether it’s pocket passers like Tom Brady and Peyton Manning who may not be adept at scrambling, or deadeye accurate ones like Drew Brees and Joe Montana who might lack elite arm strength, or strong-armed throwers like John Elway or Brett Favre who weren’t always the most accurate.

For others, the missing ingredient might have been decision-making, poise, leadership or any of the more than a dozen traits that make the top quarterbacks as successful as they are.

That’s what makes Patrick Mahomes so special. There’s just about nothing he isn’t elite at.

“Mahomes checks so many boxes. It’s really hard to describe to people how special this guy is,” CBS game analyst Tony Romo said. “I can’t think of somebody in history that you just go through and keep going because everyone has a weakness and you’re trying to find everyone’s weakness as an analyst or every team’s scheme weakness and figure it out. I really feel like he’s just the rare guy.”

Mahomes combines arm strength that rivals almost any peer, with the ability to scramble or make plays on the run, with the accuracy and decision making that limit crippling mistakes, with the poise under pressure and leadership that have helped lead the Kansas City Chiefs to their second straight Super Bowl appearance.

In his short time as a starting quarterback, Mahomes has put together perhaps the best three-year stretch of play the game has ever seen. Including the playoffs, he has thrown for 15,922 yards since the start of 2018 with 131 TD passes, while winning the 2018 AP MVP award, the Super Bowl MVP last season and is in position for another title on Sunday against the Tampa Bay Buccaneers.

That would make the 25-year-old Mahomes the youngest quarterback ever with two Super Bowl wins, reaching the mark a year before Brady and Ben Roethlisberger both did.

“I don’t think there’s a play that he doesn’t think he can make,” Brady said. “He thinks he can make every play, which tells you the kind of confidence he has in his own game.”

Mahomes has gotten to this stage by thriving at almost every aspect of the game whether it be under pressure, against the blitz, from a clean pocket, on the run or on almost any pattern thrown nearly any distance.

But there are a few areas where Mahomes stands out more than others, according to data tracked in the regular season and playoffs this season by SportRadar.

The first question for defenses when facing the Chiefs is whether to send extra rushers to try to disrupt Mahomes or sit back in coverage and hope to get pressure with four rushes.

The Bucs are one of the most blitz-happy teams, sending extra rushers on more than 40% of pass plays for the fifth highest rate in the league. That’s a strategy that doesn’t typically work well against Mahomes, who has a league-best 126.7 passer rating with 14 TD passes and no interceptions against the blitz in the regular season and playoffs.

Tampa Bay cut its blitz by more than half in the first meeting when Mahomes gashed the Bucs for 462 yards and three TDs. Two of those TDs came on the nine pass attempts against the blitz but Mahomes also went 31 for 40 for 373 yards and a score against conventional rushes.

Mahomes threw all six of his interceptions this season when he wasn’t rushed by more than four defenders but still posted an impressive 104.3 rating in those situations.

Mahomes was the only qualifying QB in the league who didn’t throw an interception this season when he was under pressure as he handles that better than most of his peers. He’s particularly dangerous when he’s able to escape the pocket to his right, throwing 11 TDs on 89 passes with a 120 rating.

He also makes plays with his legs, leading the league with seven first-down runs when needing at least seven yards to go on third down.

“They’re the best at what they do as far as that goes,” Bucs cornerbacks coach Kevin Ross said. “The only comparison I would have with that with Mahomes is probably John Elway. John Elway could sprint to his right or sprint to his left and throw the ball back across the field, 70 yards on a rope. Patrick has that ability. You can’t go to sleep on it. You really don’t know what it feels like until you actually go against it."

Mahomes and the Chiefs can pick apart defenses with any pass route. SportRadar tracks 12 different routes in its database, and Mahomes has a rating higher than 100 on 10 of those routes, led by his 141.8 rating on crossing routes that allow his speedy receivers to get loose in the secondary.

Mahomes also thrives on corner and go routes as his strong arm helps him make some of the more difficult throws. The only ones where he struggled at all this season came on comebackers and in-routes, where his rating was in the 70s.