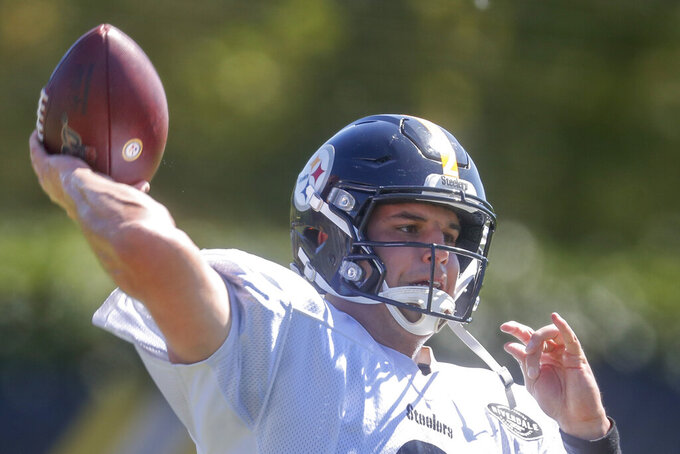 PITTSBURGH (AP) — Mason Rudolph could have gone the hat and clipboard route, the typical gear of choice for most NFL backup quarterbacks. The inner pragmatist in him would have none of it.

So Rudolph spent the first six quarters of the 2019 season standing on the Pittsburgh Steelers sideline with his helmet on while watching Ben Roethlisberger go to work. And Rudolph didn't just have it sitting atop his head either. Most of the time he would tug it all the way down.

He's aware it looked a little weird. Well, weird for everyone else. Just not for the self-professed football "nerd" who prefers functionality over fashion.

Rudolph's fear of misplacing his lid or wasting valuable seconds sprinting to the bench in a mad dash to find it far outweighed the comfort of a baseball cap.

Maybe it's fitting for a player committed to the art of being over-prepared, one who suddenly finds himself in the position of helping the Steelers emerge from an early 0-2 hole .

The 24-year-old will make his first NFL start Sunday when Pittsburgh visits unbeaten San Francisco (2-0), thrust into the starting job for the rest of the season — and maybe longer — with Roethlisberger sidelined by a right elbow injury that requires surgery. It's a position Rudolph always believed he'd be in, if not in Pittsburgh then elsewhere.

"That was always the plan," Rudolph said. "And obviously would I have liked to have it happen sooner? Yeah. But God's got a plan and I'm just trying to, like I said, take it day by day."

Even if some days have felt longer than others since the Steelers selected him in the third round of the 2018 draft .

Pittsburgh made the unusual move of trading up to acquire Rudolph, leading to speculation that the team pegged Rudolph as Roethlisberger's eventual heir. At least that was the theory. Reality proved differently.

Rudolph couldn't beat out Josh Dobbs for the backup job last season, forcing Rudolph to spend most of his rookie year watching football instead of playing it for the first time in his life.

The Steelers then gave Roethlisberger a contract extension in the spring that runs through 2021, which also happens to be the end of Rudolph's deal. Rudolph made it a point to not get caught up in his future prospects and instead focused on improving from one practice to the next. That doesn't mean it wasn't easy to be a spectator on game days after being made inactive.

"In the moment you are still kind of, you know, you want to play, you're (ticked)," Rudolph said. "And it's all short term. I tried to have a long-term mentality and understand that hopefully I will be playing this game a long time and as long as I'm ready for my opportunity, that's kind of all that matters."

That opportunity came last Sunday, when Roethlisberger's 37-year-old right elbow forced him out of the second half against Seattle.

Enter Rudolph, who set records at Oklahoma State yet slipped to the 76th overall pick in 2018 for reasons that were never made clear to Rudolph. Not that he particularly cares. He's here. He's playing. And if he gets a chance to make a point to the teams that passed on him, so be it.

"I've always had a chip," Rudolph said. "That's how I was raised. I love football and yeah, I'm passionate about it. I'm going to celebrate. I'm going to have fun. Going to try and be a catalyst for this offense, for this team and that's who I've always been. I'm not going to change for that."

And the Steelers insist their offense won't change much after going from a quarterback with 218 games under his belt — the second-highest total in the franchise's 87-year history — to one with two quarter's worth.

Rudolph didn't look out of place in the second half against Seattle on Sunday, completing 12 of 19 passes for 112 yards and two touchdowns. He hit JuJu Smith-Schuster with a deep ball. He patiently waited for tight end Vance McDonald to get open on a delayed screen that McDonald turned into an 8-yard score. He practically fired the ball through Diontae Johnson's extended hand on a stop route.

Those were the kind of throws Rudolph made with regularity at Oklahoma State. Yet it wasn't just his arm strength that won over Pittsburgh's coaching staff.

"You saw the ability to lead an organization," offensive coordinator Randy Fichtner said. "Oklahoma State won a lot of football games with Mason Rudolph. You better have winning in your background as well. That's valuable."

The Cowboys went 30-9 during Rudolph's three seasons as the full-time starter. Two of those came against Pittsburgh, including a 59-21 victory at Heinz Field in 2017, a game in which Rudolph threw for 497 yards and five touchdowns with Steelers general manager Kevin Colbert watching from the press box.

Oh, and he did it without throwing a pass over the final 22 minutes after getting pulled in the third quarter with things well in hand.

"He knows how to throw the ball," Pitt coach Pat Narduzzi said. "He doesn't take pressure or get flustered with pressure. So Mason will be fine. ... He's special."

The Steelers stressed they don't need Rudolph to become Roethlisberger 2.0. Roethlisberger took over for the injured Tommy Maddox in Week 2 of 2004 and never looked back. It's far too early to heap those kinds of expectations on Rudolph. For now, there's just Sunday. That's enough.

"He's been learning from Ben these last two years," running back Jaylen Samuels said. "I believe in him and I'm sure everyone else in this locker room believes in him. We'll just keep fighting. We're 0-2. We still can go 14-2."