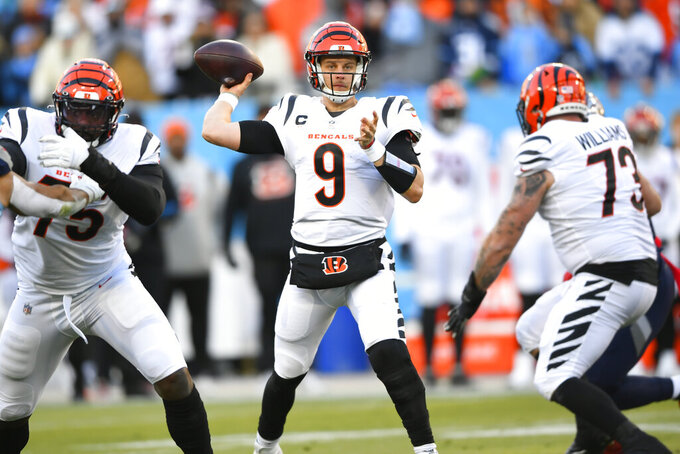 Cincinnati Bengals quarterback Joe Burrow (9) pases from the pocket against the Tennessee Titans during the first half of an NFL divisional round playoff football game, Saturday, Jan. 22, 2022, in Nashville, Tenn. (AP Photo/John Amis) 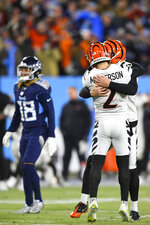 Especially with the way they keep ending postseason droughts. And with their latest victory putting them in the franchise's first AFC championship game in 33 years — and a win away from the Super Bowl.

“He's got ice in his veins,” Cincinnati coach Zac Taylor said of McPherson. “There’s not much more to be said. He’s just as cool as it gets.”

A week after snapping a 31-year playoff victory drought, the Bengals (12-7) finally won their first road game in the postseason after losing their first seven. They reached the 1981 and 1988 Super Bowls by winning on their home field.

“We’re here to make some noise, and teams are going to have to pay attention to us,” Cincinnati quarterback Joe Burrow said.

Cincinnati will play in the AFC championship game next Sunday at the winner of the Buffalo-Kansas City matchup. They play in the other AFC divisional round game Sunday.

“That’s a kicker’s dream,” McPherson said, "to have the game on your shoulders.”

Burrow shook off being sacked nine times as Tennessee tied an NFL mark held by four other teams for the most in the postseason. He threw for 348 yards to become the first quarterback taken No. 1 overall to win a divisional game within his first two seasons.

Joe Mixon ran for the Bengals' lone touchdown, a 16-yarder on their first drive of the third quarter.

“We found a way all year,” Burrow said. "Man, crazy, crazy game. That’s a really, really good team. Unbelievable defensive line. They had a great plan on defense. Credit to them, we found a way at the end.”

The Titans (12-6) wrapped up their 25th season in Tennessee with their third straight loss on their own field as the AFC's No. 1 seed. They haven't won at home since January 2003 in the postseason.

“I don't think Ryan or myself or anybody did enough to win the game,” Titans coach Mike Vrabel said. “That’s how it goes. It's never going to be about one person, not as long as I'm head coach, which will be a while.”

Tennessee had Derrick Henry, the 2020 AP NFL Offensive Player of the Year, on the field after he missed nine games with a broken foot. He ran for a touchdown and finished with 66 yards.

Tannehill was picked off on the Titans' first play of the game. His second came on first-and-goal at the Bengals 9 in the third. He finished with 220 yards passing. A.J. Brown had five catches for 142 yards.

Burrow was the NFL’s most sacked quarterback during the season, just ahead of Tannehill.

The Titans sacked him on his first snap and had three in the first quarter alone. Burrow became only the second quarterback to win an NFL playoff game despite being sacked nine times, joining Len Dawson who beat Buffalo for the 1966 AFL championship.

The Titans had plenty of opportunities to win.

Henry was stopped on fourth-and-1 at the Cincinnati 37 instead of Tennessee trying a long field goal for the lead with 7:16 left. They also got the ball back with 2:43 left and plenty of time to drive for the winning field goal themselves after scoring 10 points within 90 seconds late in the third quarter, tying it up at 16.

Tennessee showed little awareness of the clock, running only one play before the clock stopped for the 2-minute warning. On the third play, Tannehill’s pass to Nick Westbrook-Ikhine was picked off by Wilson setting up the Bengals for the winning field goal.

“All day we were just shooting ourselves in the foot,” Brown said of the Titans.

Tannehill summed up the pain of the loss, “This hurts. Hurts bad.”

McPherson converted for his 11th field goal from 50 yards or longer, the most in a season for one player. He also became the first kicker in NFL history with at least four or more field goals in multiple games in a single postseason.

“He stepped up big and got us to where we need to go," Burrow said.

Titans LB David Long was hurt early in the third quarter, but walked off the field. He later returned. ... Bengals Pro Bowl defensive end Trey Hendrickson, cleared from a concussion that knocked him out of last week’s wild-card win, went to the sideline with 1:46 left. That cost the Bengals a timeout they didn't wind up needing.

Bengals: Will wait to see if they’re playing in Kansas City or Buffalo next Sunday.

Titans: Step into the offseason looking for further tweaks to get back to the AFC championship game.