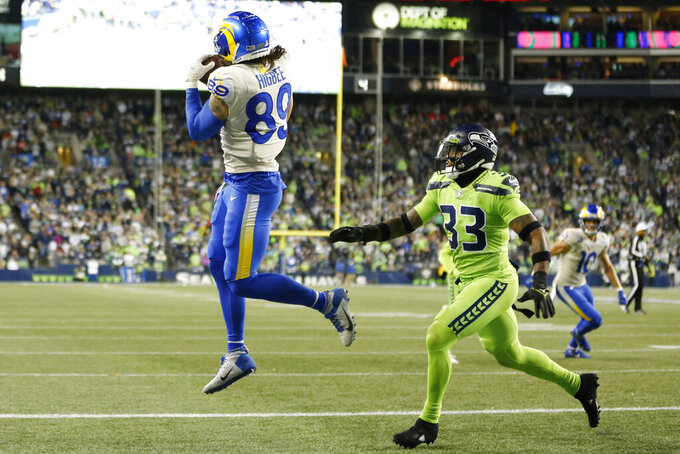 LOS ANGELES (AP) — Fast starts to a season are nothing new for the Los Angeles Rams. They've never had a losing record at any point in coach Sean McVay's half-decade in charge, and their 26-17 win at Seattle on Thursday made them 4-1 or better for the third time in the last four years.

But the way these current Rams got to 4-1 looks particularly encouraging for their goal of continuing to improve all the way to the Super Bowl.

The Rams' 3-0 start came to a crashing halt last weekend in a home loss to Arizona. With only three days to prepare for Seattle, Los Angeles still came up with enough adjustments and improved play to beat one of its biggest rivals in a deafening home stadium.

“What I liked the most is, it’s about how you finish,” McVay said Friday. “I’d like to see us play consistent through four quarters, but I love the resilience. I love the resolve of this team. It really boiled down to execution.”

Those adjustments happened both during the short week of preparation and during the game itself. Seattle led 7-3 at halftime, but the Rams' offense made enough changes in focus and found enough weaknesses in the Seahawks' defense to rack up 301 yards and four scoring drives in the second half.

“I think the fun thing is being 4-1 and knowing that our best game of football hasn’t been played yet,” said Matthew Stafford, who passed for a season-high 365 yards and a touchdown. “There’s a lot of things that we could clean up, that I could clean up.”

The Rams head into this mini-bye weekend with nine days before they start what looks like a softer stretch of their schedule, and they're in position to stay atop the list of NFC contenders deep into November. Their next four opponents — the New York Giants, Detroit, Houston and Tennessee — have four combined victories.

McVay isn't expecting an easy ride through the next four weeks, obviously. And before he spends his Sunday on the couch watching football, McVay plans to do a deep evaluation of the Rams and their areas for improvement.

“Even though the records are what they are, there's a reason why every week there's those one or two results that make you say, ‘I cannot believe that happened,’” McVay said. “That's why people lose a lot of money betting on NFL games week in and week out. You've got to show up.”

The Rams' 476 yards of offense were their most in their last 20 games and Los Angeles' third most in the past two calendar years. Pure yardage numbers aren't a perfect indicator of offensive effectiveness, but the Rams struggled to rack them up over the past two seasons, so they're grateful to be back among the league leaders in moving the ball regularly and efficiently.

Los Angeles' defense still needs improvement in just about every area, and injuries will make it more difficult. The Seahawks had 354 yards despite Geno Smith replacing Russell Wilson, but at least the Rams made two red-zone stops to hold Seattle to field goal attempts. Even 2020 All-Pro defensive back Jalen Ramsey didn't have his best game after a dominant start to the season.

For a rookie cornerback who committed a 47-yard pass interference penalty and later got beaten for a touchdown, Robert Rochell received remarkable praise from McVay on Friday. “He’s a mentally tough kid,” the coach said. “He’s unfazed. ... Certainly wasn’t perfect, but his competitiveness, his toughness, all of those things that make you a football player, I thought that was demonstrated yesterday. I think he’s only going to improve and get more and more confident.”

For the first time, the Rams have reason to worry about kicker Matt Gay, who missed an extra point, pushed two kickoffs out of bounds and struggled with distance on others. Gay narrowly made a 47-yard field goal in the final minute, but a kicker who had been extremely reliable since arriving midway through last season is coming off a rough game.

CB Darious Williams has a sprained ankle, and McVay doesn't know whether he'll play next weekend. The Rams appear to believe Rochell could handle more action in a starting role, but Williams is a defensive keystone. ... Stafford's banged-up finger doesn't appear to be significant, McVay indicated.

12 — Robert Woods' receptions in Seattle after the veteran wideout had just 15 catches in the Rams' first four games combined. Woods and McVay recently had a heart-to-heart conversation about his role, and McVay and Stafford responded by making Woods his focus against the Seahawks with 14 targets for 150 yards. The balance is back in Woods' dynamic partnership with Cooper Kupp, who added seven catches for 92 yards.

A trip to New Jersey to face the Giants, who will be 1-4 unless they beat first-place Dallas on the road this Sunday.