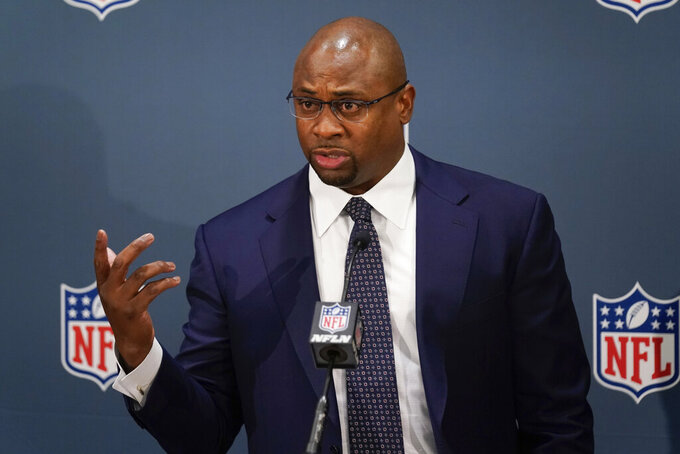 FILE - Troy Vincent, executive vice president of football operations at the NFL, speaks to reporters during NFL meetings in New York, Oct. 26, 2021. While recent hiring numbers for NFL coordinators are encouraging, the overall journey to diversity and inclusion for head coaches remains a struggle. Who says? Two of the most prominent proponents of the Rooney Rule: Vincent and Rod Graves. (AP Photo/Seth Wenig, File)

While recent hiring numbers for NFL coordinators are encouraging, the overall journey to diversity and inclusion for head coaches remains a struggle.

Who says? Two of the most prominent proponents of the Rooney Rule: Troy Vincent and Rod Graves.

Vincent is a former star defensive back and president of the NFL players union, and now the league's chief of football operations. He calls the hiring process “broken.” Graves, a former NFL general manager and now executive director of the Fritz Pollard Alliance, says a “new system” is needed to ensure viable candidates are recognized and interviewed.

“It goes back to the willingness of the institutions and the people that are administering this process, this interview process," Vincent says. "When I look at it at its core, the process is broken. We have exhausted ourselves with programs and initiatives. We have had both men and women, college and pro (on) a strong depth chart we actually have developed, with the clubs’ support. We don’t have a resource issue.

“This is a willingness and heart issue," he adds without noting that 30 of the 31 team owners are white; the Green Bay Packers are a community-owned franchise. "You can’t force people, so we have to continue to educate and share with those in the hiring cycle. Why? Inclusion matters. It is the right thing to do. Let’s do things for the right reasons.”

Weekly through the remainder of the regular season, The Associated Press will look at the NFL's coaching pipeline from the perspective of the coaches and executives who aim for the top jobs on and off the field, and the league institutions that have hindered them in their pursuit of those influential positions.

Consider that 127 head coaching jobs have come open since the Rooney Rule was instituted in 2003, and 27 went to minorities. That is 21% in a league in which more than two-thirds of the players are Black.

The numbers actually have been better very recently for front office and coordinator positions if not for head coaches.

“When you look at the entirety, speaking from the whole pie, there has been tremendous progress over the past 24 months," Vincent says.

He cites these statistics:

— Special teams had four open jobs in 2020, with no minorities even interviewed. For this season, there were 10 openings and 12 minorities were interviewed, with four hired.

Vincent adds that the NFL had three Black general managers hired for seven openings: Terry Fontenot in Atlanta, Brad Holmes in Detroit and Martin Mayhew in Washington — a highly notable achievement to Vincent.

But the spotlight always is on head coaches, and both Vincent and Graves admit much work must be done to enhance opportunities for minorities.

“Head coach, we had seven jobs and only the one hire, David Culley in Houston, and we can do better in that area,” Vincent says. “We have to acknowledge we didn’t see the progress from the head coach hires that we saw from all three coordinators as well as the general manager role.”

To get to that goal, Graves believes a major step is required: outside help.

He doesn't mean his organization, which he doesn't think has enough authority in its role as an advocacy group for minorities in the sport. He wants the Alliance to be involved in the process, but seeks “an authority who can bring consequences.”

Graves insists now is the time for leaders in the NFL as well as other leagues and the colleges, to seize the moment. It should have happened years ago on the grass-roots level, which could have driven a process that created opportunities for equity. Those opportunities rarely occurred.

Can resolutions be reached? Graves believes so, but only with forward-thinking minds.

“But we must be able to let go of the old and embrace the new,” he says. "We are talking about that, but in my opinion, we don’t have anything on the table that initiates that process toward true change.”