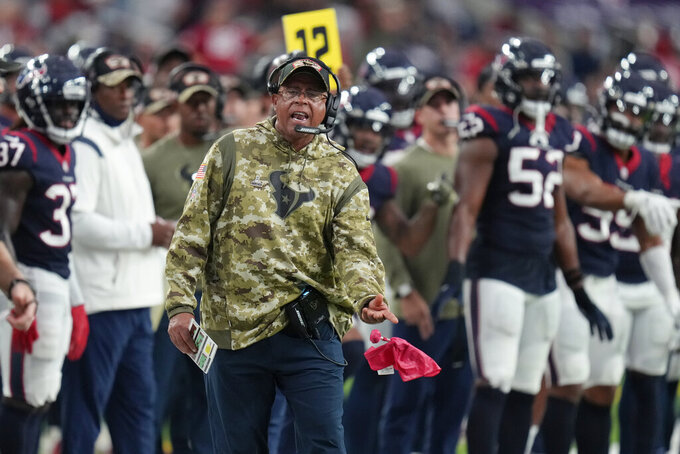 The NFL has earned higher scores for racial and gender hiring in an annual diversity report, though team-level grades continue to lag behind the league office.

Wednesday’s report card from The Institute for Diversity and Ethics in Sport (TIDES) at Central Florida assigned an overall B grade for the league, with a B-plus for racial hiring and a C-plus for gender hiring. The report examined a range of positions at the league headquarters and within franchises using data for the 2021 season.

The list included all-time highs for women working in positions at the NFL office (38.8%) and for people of color serving as assistant coaches (40.9%).

“The overall categories increased by 2%,” TIDES director and lead report author Richard Lapchick said in an interview with The Associated Press. “That’s really difficult to do with the report card, to move it that much. The kind of across-the-board improvements in so many categories was definitely heartening.”

The overall score increased to 81.8, up from 79.1 last year, to raise the letter grade up from a B-minus. The numerical scores were up for both racial and gender hiring, though the gender grade inched up from a C last year while the racial grade remained a B-plus.

The study also noted that this year’s report cards have changed methodology to include team ownership, as a category, which reduced the gains posted in each category compared to what would’ve been reported in previous years.

The league also received a C-plus with five people of color working as general managers for a C-plus grade: Atlanta’s Terry Fontenot, Cleveland’s Andrew Berry, Detroit’s Brad Holmes, Miami’s Chris Grier and Washington’s Martin Mayhew. All but Grier have been hired since 2020.

At the league office, the NFL received an A-plus in racial hiring with people of color filling 31.1% of positions and a B in gender hiring. Those grades were generally higher than positions at the team level, such as women working as a vice president and higher at the league office (filling 30.6% of those roles) compared to the team level (25.1%).

“That’s true across all the leagues for the most part,” Lapchick said. “It’s how do you move those (diversity) policies to the club level. In some cases, the club level has embraced it. I think they’ve embraced it more this year.”

In a statement, the NFL said it continues to “prioritize diverse representation of personnel on and off the field.”

“While we have made progress over the last year, and that’s evident in this year’s report, we recognize there is still work to be done,” the league said. “We are committed to providing an environment where everyone can compete and thrive and ensuring there are equitable opportunities across the league for minorities and women, especially in leadership roles.”

Lapchick has previously praised the NFL for steps such as expanding the Rooney rule. He also credited the league for holding a virtual general manager forum in June named after Ozzie Newsome as the league's first Black general manager in an effort to increase minority hiring in front offices in a league where 70.7% of players are people of color.

“I think there’s definitely more of an emphasis, and I think part of it is that was the direction the NFL was on anyway,” Lapchick said. “And I think that the racial reckoning after the murder of George Floyd has made everybody scrutinize their own house to be sure they are living up to what they say they’re doing as opposed to setting a goal and it really doesn’t matter if they get there.”

TIDES issues annual report cards on racial- and gender-hiring practices in professional leagues such as the NBA, WNBA, Major League Baseball and Major League Soccer, as well as for college sports in diversity hiring and graduation rates.