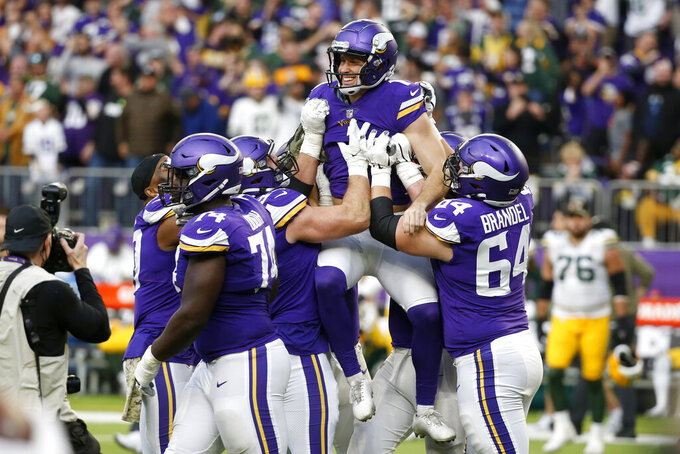 Giants at Buccaneers, 8:15 p.m. EST. The Bucs (6-3) and Tom Brady are riding a two-game losing streak. The 44-year-old Brady has lost three games in a row only once, in 2002, his full season as Patriots starting quarterback. The Giants (3-6) won two of three before a bye last week. New York hopes to get running back Saquon Barkley back from an ankle injury. The Giants have lost nine straight in prime time, including games at Washington and Kansas City this season.

— Jonathan Taylor, Colts had 32 carries for 185 yards and four touchdowns in a 41-15 romp at Buffalo. He also caught a TD, setting a franchise record with five TDs in a game. He is the NFL’s first player with five TDs in in a game since New Orleans RB Alvin Kamara had six TDs against Minnesota last Christmas. Taylor has 1,122 yards rushing this season.

— D’Andre Swift, Lions ran for a career-high 136 yards, breaking off a 57-yard TD run in the second half in a 13-10 loss to Cleveland. Nick Chubb, Browns, ran for 130 yards on 22 carries against winless Detroit.

— Miles Sanders, Eagles, ran for 94 yards and QB Jalen Hurts rushed for 69 yards and three TDs as the Eagles embarrassed the Saints, rushing for 244 yards in a 40-19 victory.

— Terry McLaurin, Washington, had five catches for 103 yards and a TD in a 27-21 victory at Carolina.

— Tyreek Hill, Kansas City, caught nine passes for 77 yards while TE Travis Kelce had five catches for 74 in a 19-9 win against Dallas.

— TE Zach Ertz, Cardinals, had eight catches for 88 yards, while WR Rondale Moore caught all of his 11 targets for 51 yards as Arizona won at Seattle 23-13. Seattle WR Tyler Lockett had four catches for 115 yards.

— Greg Joseph, Vikings, made a 29-yard field goal as time expired to give Minnesota a 34-31 victory over the Packers.

— Justin Tucker kicked three field goals as the Ravens rebounded from a loss to Miami and beat Chicago 16-13.

— Cornerback Darius Slay, Eagles, scored on a 51-yard interception return against the Saints in a 40-29 win. He has three touchdowns in the last four games. He returned two fumbles for TDs in the previous three games. Saints DE Marcus Davenport had 10 tackles, including 1 1/2 sacks.

— Charvarius Ward, Chiefs, picked off Dak Prescott in the end zone near the end of the first half, and Chris Jones had 3 1/2 sacks while forcing and recovering a fumble as the defense led the Chiefs to a fourth straight win, 19-9 against Dallas. Cowboys LB Micah Parsons forced a fumble and had two sacks.

— Cornerback Desmond King had two of the Texans' four interceptions against Titans QB Ryan Tannehill in a 22-13 upset.

— Seattle LBs Jordyn Brooks and Bobby Wagner had 15 and 14 tackles, respectively, in a 23-13 defeat against Arizona.

Colts RB Jonathan Taylor matched an NFL record by scoring a touchdown and gaining at least 100 yards from scrimmage in an eighth consecutive game. The only other NFL players to score a touchdown and gain 100 yards from scrimmage in eight straight games are former Colts running back Lydell Mitchell in 1975-76 and Pro Football Hall of Famer LaDainian Tomlinson in 2006. .... Detroit quarterback Tim Boyle made his first NFL start, filling in for Jared Goff against the Browns. The 27-year-old Boyle, who spent three seasons backing up Rodgers in Green Bay, was 15 of 23 for 77 yards and two picks. ... Tennessee inducted Jeff Fisher and the late Floyd Reese into its Ring of Honor at halftime of its game against the Texans.

Not counting the late game with Pittsburgh at the Chargers and Monday night's Giants at Bucs, the home teams went 4-9 this week. ... The Texans snapped the NFL’s longest active skid - eight games — by beating the Titans 22-13. It also ended Tennessee's six-game winning streak. When Tyrod Taylor scored on a 7-yard run in the second quarter, it was the Texans' first road TD since Week 2. ... The Jaguars have lost 14 consecutive games against NFC teams, a skid that dates to the 2018 season. Their 200 yards on 44 plays, tied for the fifth fewest in franchise history. They fell to 7-44 in their last 15 games against the other conference. San Francisco. meanwhile, ran 33 of the game’s first 37 plays and had more first downs (14) than Jacksonville had yards (12) midway through the second quarter. ... The Bears (3-7) lost their fifth straight. They remained winless following byes since 2013. ... The Bengals snapped a two-game losing streak and extended the Raiders' skid to three. ... ... Miami took the all-time series lead against the Jets for the first time since 2000, going up 56-55-1 with a 24-17 win. ... Seattle (3-7) has lost two in a row and five of six. The Seahawks had gone 20 straight possessions without a touchdown before DeeJay Dallas ran for a TD midway through the fourth quarter. ... The Cardinals had the ball for more than 40 minutes and ran 79 offensive plays, 30 more than Seattle, in a 23-13 victory.

Bears QB Justin Fields left in the second half against the Ravens with a rib injury. ... Baltimore starting QB Lamar Jackson was inactive because of an illness. ... RB Aaron Jones (knee) and OLB Rashan Gary (elbow) were both out against Minnesota, leaving the Packers without their leading rusher and top pass rusher. ... Jets QB Zach Wilson missed his fourth straight game with a knee injury. ... Niners RB Elijah Mitchell (rib, finger) was sidelined against Jacksonville. ... Lions QB Jarod Goff was sidelined with an oblique injury. ... Cardinals QB Kyler Murray was inactive against Seattle due to an ankle injury for the third straight week. ... Titans WR Marcus Johnson, who had a 100-yard receiving game last week, pulled a hamstring late in the first quarter against Houston and did not return. Dallas was without Amari Cooper because of a positive COVID-19 test and and fellow WR CeeDee Lamb sustained a concussion just before halftime at Kansas City. RB Ezekiel Elliott appeared to tweak his ankle early in the game. ... Seahawks rookie CB Tre Brown left the game at Arizona with a knee injury.

Jacksonville safety Rayshawn Jenkins was ejected in the second quarter for throwing a punch. Jenkins and 49ers receiver Jauan Jennings started grabbing and pushing each other after a third-down run that lost yardage. Jennings’ helmet came off on the play, and Jenkins threw a punch and got tossed.

THE RETURN OF SUPERMAN

Cam Newton, playing at Bank of America Stadium for the first time since returning to Carolina, celebrated a 24-yard touchdown run by racing out to the Panthers logo at midfield and doing his Superman impersonation, pretending to rip open his jersey. Newton was signed to a one-year, $10 million, incentive-based contract on Nov. 11, rejoining the team that drafted him No. 1 overall in 2011.

“Nobody likes to lose. We want to win, so it’s frustrating.” — Lions RB D'Andre Swift as they remained winless at 0-9-1 after being beaten 13-10 by Cleveland.

“To see your quarterback do that especially, I kind of went ‘Aw, shoot, just come down in one piece.’” Houston running back Rex Burkhead after Tyrod Taylor flipped over Titans safety Amani Hooker in scoring the Texans' first road TD since Week 2.