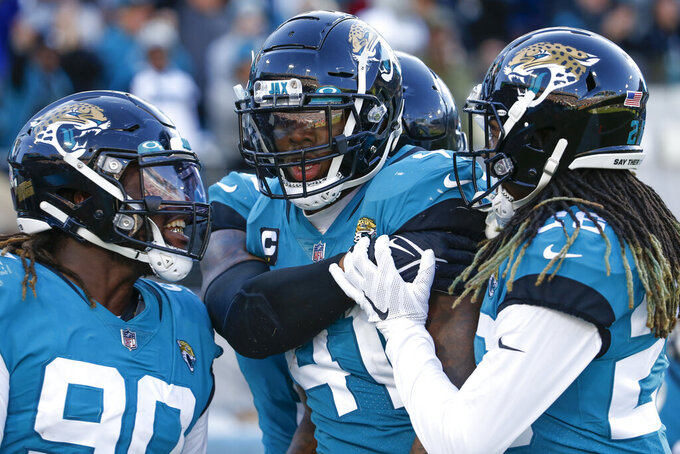 Jacksonville Jaguars linebacker Josh Allen, center, celebrates with teammates after intercepting a Buffalo Bills pass during the second half of an NFL football game, Sunday, Nov. 7, 2021, in Jacksonville, Fla. (AP Photo/Stephen B. Morton)

Bears at Steelers, 8:15 p.m. EST. Rookie quarterback Justin Fields rushed for 103 yards last week for the Bears, but he's spent much of his time running for his life. Chicago (3-5) has allowed a league-high 30 sacks, including four in each of its past three games, all double-digit losses. Pittsburgh (4-3), meanwhile, has won three straight as its young offensive line has started to come together. The Steelers need another win to avoid falling into last place in the rugged AFC North.

— Lamar Jackson, Ravens, passed for 266 yards and three touchdowns, and rushed for 120 yards on 21 carries, in Baltimore's 34-31 overtime victory over Minnesota.

— Nick Chubb, Browns, had a 70-yard touchdown run and finished with 137 yards and two scores on 14 carries as Cleveland beat Cincinnati 41-16.

— Devontae Booker, Giants, rushed for 99 yards on 21 carries while subbing for the injured Saquon Barkley in New York's 23-16 win over Las Vegas.

— James Conner, Cardinals, had 21 carries for 96 yards and two touchdowns, while adding five receptions for 77 yards and another score, in Arizona's 31-17 win over San Francisco.

— DeVonta Smith, Eagles, had 116 yards on five catches, including a touchdown, in Philadelphia's 27-24 loss to the Los Angeles Chargers.

— George Kittle, 49ers, had six receptions for 101 yards and a touchdown in San Francisco's 31-17 loss to Arizona.

— Jaylen Waddle, Dolphins, had eight receptions for 83 yards in Miami's 17-9 win over Houston.

— Kene Nwangwu, Vikings, ran the second-half kickoff back 98 yards for a touchdown in Minnesota's 34-31 overtime loss at Baltimore.

— Justin Tucker, Ravens, was 2 for 2 on field goals, including a winning 36-yarder in overtime, and perfect on four extra points in Baltimore's 34-31 win over Minnesota.

— Josh Allen, Jaguars, sacked Buffalo's quarterback of the same name, intercepted him and also recovered a fumble by the Bills' Josh Allen in Jacksonville's 9-6 win.

— J.C. Jackson, Patriots, returned one of his two interceptions 88 yards for a touchdown in New England's 24-6 win over Carolina.

— Xavier McKinney, Giants, had two interceptions, including one he returned 41 yards for a touchdown, in New York's 23-16 win over Las Vegas.

— Denzel Ward, Browns, had a 99-yard interception return for a touchdown in Cleveland's 41-16 win over Cincinnati.

— Troy Hill, Browns, had two sacks of Joe Burrow on cornerback blitzes in Cleveland's win over the Bengals.

— Jonathon Cooper, Broncos, had two sacks as Denver's defense stifled the Dallas Cowboys in a 30-16 win.

Baltimore's Lamar Jackson rushed for 120 yards on 21 carries in a 34-31 overtime win over Minnesota, tying Michael Vick's record for quarterbacks with his 10th career 100-yard rushing game. ... The Cleveland Browns became the first team since the 1967 San Diego Chargers to get an interception return for a touchdown, a receiving TD and a rushing TD of at least 60 yards in a single game. ... Keenan Allen of the Los Angeles Chargers had his ninth game with at least 12 receptions and 100 receiving yards, breaking the record of eight shared by Marvin Harrison and Wes Welker. ... Atlanta's Matt Ryan had his 73rd 300-yard passing game, tying Philip Rivers for the fourth most in history.

The Houston Texans dropped their eighth straight game, becoming the 12th team in NFL history to start 1-0 and lose their next eight games — a fate the Miami Dolphins avoided by beating the Texans. ... The Dolphins won while committing five turnovers, the first time Miami had done that since Oct. 18, 1990. The Dolphins had been 0-21 in such games since. They and the Texans combined for nine turnovers, the most in an NFL game since Sept. 25, 2016 between the New York Jets and Kansas City. ... Justin Tucker made his 18th game-winning field goal, a 36-yarder in overtime that gave Baltimore a 34-31 win over Minnesota. Tucker has made 53 consecutive field goals in the fourth quarter or overtime. ... Four teams (Denver, Jacksonville, Kansas City and the New York Giants) entered the day at .500 or worse and beat a team that began the day leading its division, the first time that has happened in Week 9 or later since Dec. 18, 2011.

Ravens safety DeShon Elliott will likely miss the rest of the season with an injury to his pectoral/bicep area that he suffered in the fourth quarter of Baltimore's overtime win over the Vikings, coach John Harbaugh said. ... Panthers center Matt Paradis tore the ACL in his left knee on the second play of Carolina's loss to New England, a person with knowledge of the situation told The Associated Press. The person spoke on condition of anonymity because the team had not announced the injury. ... The Panthers also lost defensive end Brian Burns (ankle), cornerback Rashaan Melvin (hand) and left tackle Cameron Erving (calf) to injuries during the game. ... Three Patriots players suffered head injuries: running backs Damien Harris and Rhamondre Stevenson and wide receiver Gunner Olszewski. ... Cardinals running back Chase Edmonds left in the first quarter of Arizona's win over San Francisco with an ankle injury. Left guard Justin Pugh (calf) also got hurt early. ... 49ers right tackle Mike McGlinchey left with a knee injury. ... Two Eagles cornerbacks were injured against the Chargers: Darius Slay (right hamstring) and Avonte Maddox (knee). ... Packers cornerback Eric Stokes suffered a knee injury and defensive lineman Kenny Clark had to be helped off with a sore back against the Chiefs. ... Kansas City right tackle Lucas Niang hurt his ribs. ... Jaguars cornerback Chris Claybooks suffered a concussion, as did Bills running back Zack Moss and cornerback Taron Johnson in Buffalo's loss at Jacksonville. The Bills also lost safety Jaquan Johnson (hamstring). ... Browns cornerback Greedy Williams went out with a right shoulder injury early and didn’t return in Cleveland’s 41-16 rout of Cincinnati. He missed all of 2020 with a nerve issue in the same shoulder. ... Bengals returner/safety Brandon Wilson was carted off the field with a left knee injury. Linebacker Akeem Davis-Gaither also hurt his left knee.

Cleveland Browns quarterback Baker Mayfield said he had no hard feelings toward Odell Beckham Jr., the polarizing wide receiver the Browns decided to release after Beckham's father shared a video on social media of Mayfield not throwing to his open son.

“I wish him well,” Mayfield said after the Browns beat the Cincinnati Bengals 41-16. “He’s a good friend of mine. We still haven’t talked, but that doesn’t change things. I wish him the best in his career, but I’m worried about the guys in our locker room.”

Five matchups in Week 9 were rematches of Super Bowls, some of them ancient: The Kansas City Chiefs exacted revenge on the Green Bay Packers for Super Bowl 1, winning 13-7 on Sunday. The Jets lost to the Colts 45-30; New York defeated the Baltimore Colts in the landmark Super Bowl 3. Dallas beat Denver in Super Bowl 12, but the Broncos topped the Cowboys 30-16 on Sunday. New England beat Carolina 24-6, a more comfortable margin than Super Bowl 38 (Patriots 32, Panthers 29). The Titans beat the Los Angeles Rams 28-16 on Sunday night; Tennessee lost to the Rams, who then played in St. Louis, in Super Bowl 34.

Packers coach Matt LaFleur blamed himself for not doing more to help quarterback Jordan Love, who made his first career start in place of Aaron Rodgers. Last year's MVP is sidelined by a positive test for COVID-19 and became the talk of the league when he explained his decision not to get vaccinated, after previously having said he was “immunized.” Love was pressured constantly by the Kansas City defense in a 13-7 loss to the Chiefs.

“I think this falls on me not having a good enough plan to go out there against that pressure, especially with a young quarterback,” LaFleur said.

It's not clear whether Love will play next week when the Packers host Seattle. The earliest Rodgers could be cleared from the NFL's COVID-19 protocol is Saturday.

THINKING OF A FRIEND

Eagles receiver DeVonta Smith said after Philadelphia's loss to the Los Angeles Chargers that he has spoken to Henry Ruggs III, his close friend and former teammate at Alabama who was released by the Las Vegas Raiders this week. The Raiders cut Ruggs after he was involved in a fiery crash that took the life of a woman and her dog. Police said Ruggs was drunk and driving 156 mph before the crash, and Ruggs faces felony charges that carry a potential decades-long prison sentence.

“My heart breaks for everybody involved, the family and the young lady that lost her life,” Smith said after he topped 100 yards receiving for the second time in his career.

“We just like to give our fans a heart attack, just keep them on their toes to make sure they’re paying attention.” — Atlanta's Cordarrelle Patterson after the Falcons blew an 18-point fourth-quarter lead before salvaging a last-minute win over the New Orleans Saints.

“We can’t have a quarterback throwing the ball up in the air. He knows that. I know that. So is it coaching, is it him? We can’t keep doing that.” — Carolina Panthers coach Matt Rhule on Sam Darnold, whose future as the team's starter is in question.

“Every single time, it doesn’t matter if it’s a PAT in the first quarter or the game-winning field goal, whether it’s a 36-yarder or a 66-yarder, it’s always about managing your feelings and managing your emotions,” Baltimore's Justin Tucker said after his 36-yard kick to beat the Vikings in overtime. “If you’re not feeling a little bit nervous, are you really living?”