NFL welcome: Up 1st for McDaniel, a matchup with Belichick 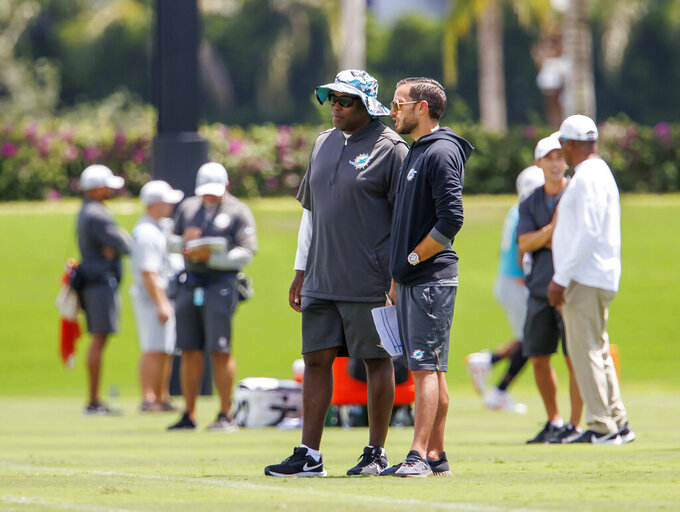 MIAMI GARDENS, Fla. (AP) — For Bill Belichick and Mike McDaniel, the 2000 season was a big deal. Belichick was starting his run as coach of the New England Patriots. McDaniel was starting at wide receiver for Smoky Hill High School.

They were worlds apart then. They’ll be on opposite sidelines Sunday.

Combined, they have 321 wins as NFL head coaches — Belichick 321, McDaniel zero. McDaniel will look to change that on Sunday in his official debut, coming when the Patriots visit the Miami Dolphins in the season opener for the AFC East rivals.

“Can there be a larger disparity in career win-loss total?” McDaniel asked this week.

Turns out, the answer is yes, but barely. Out of the 17,000 or so games played in NFL history, there have been only seven where the coaches have entered with a larger win difference. Each of them involved the Dolphins and coach Don Shula; Miami went 6-1 in those games.

Both Belichick and McDaniel would both say, and rightly so, that Sunday isn’t about them. But facing one of the greatest coaches in NFL history, one of the greatest in any pro sport, certainly adds plenty of additional intrigue to McDaniel’s debut as a head coach.

“It would be a bigger deal I think if Coach Belichick and I were on the field, maybe doing like an Oklahoma drill, but I don’t foresee that happening,” McDaniel said. “I don’t think the fans would really pay for that. ... The schedule came out a long time ago, so I digested that and knew what Week 1 was, and luckily it’s the Miami Dolphins versus New England Patriots and not a 1-on-1 square-off between head coaches.”

Miami swept the Patriots last season, and much changed for the Dolphins since. Brian Flores — a former New England assistant — was fired as Miami’s coach after last season, then filed suit against the Dolphins and the NFL alleging, among other things, racial discrimination in hiring practices. The first line of Flores’ lawsuit is the wording of a text he said he received from Belichick, one where Flores was told that the New York Giants weren’t hiring him as coach and were choosing Brian Daboll instead.

The lawsuit remains pending, but the fallout already started: a probe into Flores’ claims caused the NFL to suspend Dolphins owner Stephen Ross through mid-October after it found the team had “impermissible communications” with Tom Brady and Sean Payton while they were under contract to other clubs.

That led to McDaniel’s hiring, and on Sunday, he becomes the 144th different coach to match wits with Belichick in the NFL. And to the Patriots’ coach, Week 1 is just a big game of roulette.

“It’s hard to get everything ready for everything,” Belichick said. “Put your chips on a few numbers and if those numbers come up, you’re good, and if some other numbers come up, probably need to do something. I can’t think of too many opening days that there wasn’t in-game adjustments that were an important part of the game. I’m sure it’s true both ways. It’s opening day. Nobody’s really shown anything. We’ll see what happens.”

Belichick is seeking career win No. 322, including playoffs. Shula’s 322nd win, coincidentally, came against Belichick, a 24-14 Miami win at Cleveland in 1993.

If the Patriots win, Belichick would be two victories behind George Halas for No. 2 on the NFL’s career list and 25 behind Shula for the league record.

The seven instances where there was a bigger-than-321-games disparity in NFL career wins entering the game were these:

After spending seven seasons in Miami, receiver DeVante Parker was traded to the Patriots this offseason, a rare intra-division move that left him eager to prove he could still be the explosive player the Dolphins selected in the first round in 2015.

Parker posted career numbers for Miami in 2019 when he had 72 receptions for 1,202 receiving yards and nine TDs. But his production fell off over the past two seasons as injuries limited his time on the field — though, notably, he did catch Tua Tagovailoa’s first NFL touchdown pass.

It’s the 11th time that the Dolphins and Patriots have met in Week 1. They’ve split the past 10 such instances.