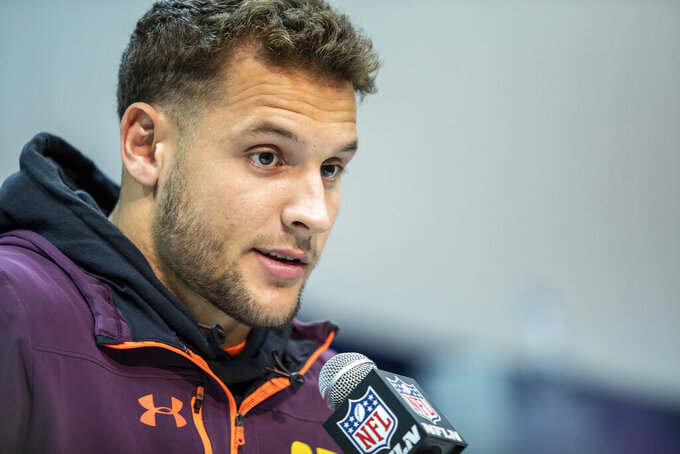 INDIANAPOLIS (AP) — Nick Bosa found himself in the news again last week when Zion Williamson sprained his right knee in the opening minute against North Carolina.

The sight of his left shoe tearing apart and Williamson grabbing his right knee unleashed feverish debate over whether Duke's freakish freshman forward should ever again play for Mike Krzyzewski's Blue Devils.

Many wondered if he should just turn his attention to the pros like Bosa did six months ago when he got hurt in Ohio State's third game of the season. Instead of rehabbing for a return to the Buckeyes, Bosa began training for the combine, the draft and a career in the NFL.

Bosa figures to get drafted higher than his father, John, who went 16th overall to Miami in 1987, and maybe even higher than big brother, Joey, the third overall pick by the Chargers in 2016.

Williamson is the consensus top pick in the NBA draft this summer.

So, Bosa was asked at the NFL scouting combine Saturday what advice he'd give Williamson, who missed his third straight game Saturday with a mild knee sprain.

"I mean, just lean on the people that you love and go with your gut," Bosa said. "I faced a pretty serious injury. I had surgery that took me out for the rest of the year, so kind of the choice was made for me."

Bosa dealt with something much more serious than Williamson did — a torn bilateral core muscle, an excruciating injury that occurs when the rectus abdominus or adductor muscles are torn off the pubic bone. Surgeons fix it by inserting a mesh cone into the tear to plug the hole formed in the muscle.

"It's literally the muscle used to breathe, to cough, to go to the bathroom," Bosa said.

Bosa got tangled up with Horned Frogs left tackle Austin Meyers on a third down pass rush on Sept. 14 in Arlington, Texas, and stayed on the turf.

"I know what a serious injury is," Bosa said. "I knew my season was in jeopardy and I had a doctor confirm that."

Bosa had gotten off to a terrific start, collecting a team-high 14 tackles, including six for loss, and four sacks when he got hurt.

"It was the year that I been waiting for my whole career," he said. "I kind of split reps my freshman and sophomore year. Coming in I was going to be the guy. ... It just got torn away from me. It's something that I'll always think back to."

That first night was the toughest, he said.

"When I got home from that TCU game I was lying in bed, I could barely get up," Bosa said. "It was one of the darkest moments of my life so far.

"So, for me to just talk to my family and let them bring me up and just know that my life is still good and I still have amazing blessings and a bright future, that's what helped me get through it."

Five days later, he underwent surgery and in mid-October, Bosa had decided he wouldn't return.

He moved in with Joey in Los Angeles and after the Chargers' season was over, the brothers returned to their hometown of Fort Lauderdale, Florida.

Bosa said he's finally back to 100 percent and wouldn't hold back during his testing at the combine nor skip any drills.

Bosa said that while he was told the injury likely came about because of the enormous torque his body experiences playing football, he's not worried that he'll reinjure himself.

"This is one of the injuries that once you get it fixed, it's pretty guaranteed to be good," Bosa said.

NFL Media analyst Daniel Jeremiah rates the 6-foot-4, 263-pounder the best player in the draft. Although he's an inch shorter and 13 pounds lighter than his brother, "I expect similar dominance and production at the NFL level," Jeremiah said.

"That would just mean so much to be thought of as the best player in the draft," Bosa said.

Joey Bosa said his brother made the right decision not to return to Ohio State: "If anyone had the opportunity to hit the lottery tomorrow, would anyone risk that? He has that opportunity. There is a difference between high draft stock and No. 1 pick in the draft."

Forget sibling rivalry , too: Bosa said his big brother wants him to do better than he did three years ago when only quarterbacks Jared Goff and Carson Wentz were drafted ahead of him.

"It's crazy that both of us are in this position so soon after each other," the younger Bosa said.

"I don't have as much tape as some people, but clearly my tape was enough to get me this far," Bosa said.

While Bosa will never forget the sudden end to his college career, he'd rather think about what lies ahead.

"I'm going to show it this year as a rookie," Bosa said. "I didn't get to show as much as I wanted at Ohio State, it was very short, but I've got a lot of football to play in my career."