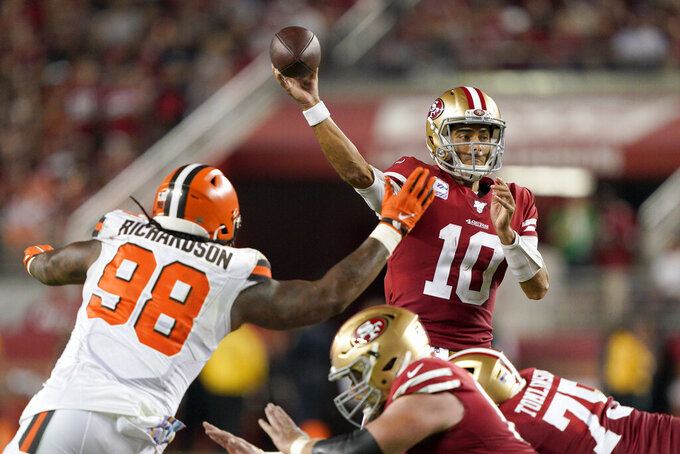 Garoppolo is 12-2 as a starter, including 4-0 this season as the San Francisco 49ers lead the NFC West. He's a win away from tying Dan Marino, Kurt Warner, Philip Rivers, Mike Tomczak and Dak Prescott for third-most wins through 15 starts. Only Roger Staubach (14) and Ben Roethlisberger (15) had more.

Garoppolo earned his first two wins with New England while Tom Brady served a suspension. He didn't get another start until he was traded to the 49ers during the 2017 season and went 5-0 down the stretch for a 6-10 team.

His performance convinced San Francisco to give him a $137.5 million contract. He lasted just three games in 2018, going 1-2 before suffering a torn ACL. But Garoppolo is healthy again and back to his winning ways.

It helps that he has the NFL's best run offense. The Niners are averaging 200 yards rushing per game.

Matt Breida, Tevin Coleman and Raheem Mostert led a rushing attack that gained 275 yards in a rout over Cleveland on Monday night.

SPECTACULAR RUSSELL: Seahawks quarterback Russell Wilson has thrown 42 touchdowns and only four interceptions in the last 19 regular-season games. He leads the NFL with a 126.3 passer rating and has been over 100 in each of Seattle's first five games of the season. Only Aaron Rodgers (12), Tom Brady (8) and Carson Palmer (6) started a season with more.

KICK THIS: Opponents of the Bills have either missed or had blocked six field goals this season. Tennessee's Cairo Santos went 0 of 4 last week. Opponents have also missed two extra points against Buffalo.

ROAD WARRIORS: The Buccaneers will travel about 20,400 miles during a stretch of five games in which they won't play in their home stadium. Starting with a game in Los Angeles against the Rams last month, the Bucs then went to New Orleans. This week they travel to the U.K. and take on Carolina at Tottenham Hotspur Stadium, and after a bye week travel to Tennessee and Seattle.

BALL PROTECTION: The Titans have only one turnover in five games despite fumbling nine times.

DESHAUN DOES DAMAGE: Texans quarterback Deshaun Watson completed 28 of 33 passes for 426 yards with five touchdowns and no interceptions in a 53-32 win over Atlanta. He became the first player to pass for at least 400 yards and five TDs with five or fewer incompletions in a game in NFL history.

A FULL DAY: Texans wide receiver Will Fuller topped his season totals in one game when he caught 14 passes for 217 yards and three TDs against Atlanta. Fuller had 14 receptions for 183 yards and no TDs in the first four games. He became the fourth player in league history to register at least 14 catches, 200 yards and three receiving TDs in a game, joining Pro Football Hall of Famers Jerry Rice and Steve Largent and also Jimmy Smith.

Panthers running back Christian McCaffrey has 587 yards rushing yards and 279 yards receiving, joining Pro Football Hall of Famer Thurman Thomas as the only players in league history to record at least 500 and 250 in their team's first five games.