Now what? At 0-9, it can still get worse for skidding Jets 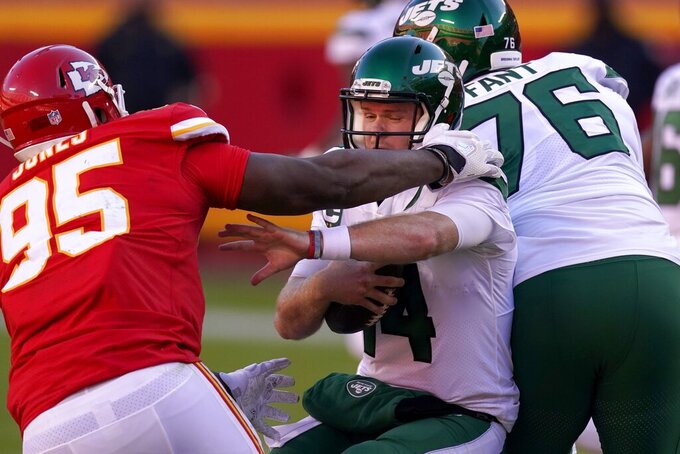 NEW YORK (AP) — The New York Jets already have set a new low for the franchise. The scary thing is, it can get a lot worse.

They're 0-9 for the first time in team history, a dubious distinction that has them hurtling toward the unthinkable: a winless season.

For three quarters Monday night, it appeared Adam Gase's group was going to actually pull off a victory. But a 10-point lead in the fourth quarter evaporated — along with the Jets' hopes for a win — with New England kicking a field goal as time expired to send New York to a 30-27 loss.

And keeping 0-16 a strong possibility.

“There are seven weeks left in the National Football League season, so if you don’t come to work ready to go, this league will make that very long and very tough for you to survive,” said quarterback Joe Flacco, who started Monday for the injured Sam Darnold.

“So we have to keep our heads up and play this thing out the only way we know how.”

The problem, though, is the Jets have shown only that they know how to lose.

Despite a mostly solid performance against the Patriots, Gase's offense has struggled mightily for most of the season while ranking last in the NFL in several key statistical categories. Gregg Williams' defense also has been inconsistent, with penalties and missed assignments keeping drives alive in key spots.

That all has even the most loyal of Jets fans stuck facing a strange dilemma:

Do they root for a win in the final seven games to end the misery and the potential humiliation of joining the 2008 Lions and 2017 Browns as the only 0-16 teams in NFL history?

Or do they simply keep rooting for more losses so they assure themselves the No. 1 pick — and likely Clemson quarterback Trevor Lawrence — in the draft next April?

“It is frustrating,” defensive lineman Folorunso Fatukasi said. “But we've still got a lot more work to do and guys are going to make sure that we're encouraged to get this thing turned around somehow."

Not a lot. And that should be obvious, given the team's record. But the Jets' kicking is one area that has been a bright spot.

Because the offense has often stalled, the kickers have had plenty of opportunities. Sam Ficken, who has missed three games with a strained right groin, is 9 of 10 on field goal attempts — with his only miss a desperation 55-yarder late in the third quarter of a 24-0 loss at Miami in Week 6.

Sergio Castillo, Ficken's fill-in, has made six of seven tries, including kicks of 50 and 55 yards. His only miss has been a block that special teams coordinator said was not Castillo's fault.

Pretty much everything. The inept offense showed signs of life against the Patriots, with Flacco throwing three touchdown passes and the 27 points just two fewer than the Jets had scored in their previous four games combined. No, that's not a misprint.

The lack of third-down efficiency and touchdowns in the red zone have been the biggest culprits in the offense's struggles.

New York's defense also has been unable to clamp down on opponents. Against New England, the Jets allowed the Patriots to score on all four of their final possessions, with two touchdowns and two field goals. In the fourth quarter, the defense couldn't get off the field, with New England holding the ball for a whopping 13:36.

Quinnen Williams. The defensive lineman missed the game Monday with a hamstring injury, but he has drawn rave reviews from coaches and observers around the league for his all-around play. It's a promising step forward for the 2019 first-rounder, whom teams inquired about at the trade deadline last week but with whom the Jets didn't want to part ways. He's viewed as a building block for the franchise.

Darnold. The quarterback is dealing with a shoulder injury that has sidelined him for three games during two separate stints. While Gase and Darnold are optimistic he could return for the Jets' next game, there are real questions about the future of the 2018 No. 3 overall pick. Darnold has been unable to show the progress expected in his third season. And with the possibility looming of Lawrence being available, time might be running out on Darnold with the Jets.

Gase said LT Mekhi Becton had a chest injury that caused him to have difficulty breathing when he left the game. He’ll keep being evaluated, but Gase said it’s not a muscle injury and there's hope for him to play in the next game. ... CB Brian Poole had no structural damage to his injured knee.

9 — That's how many consecutive games the Jets have lost, the longest skid in a single season in franchise history. The record for the worst overall losing streak could also soon be in jeopardy. That would be 12, over the 1995 and '96 seasons.

Gase will remain in charge, and he and the Jets will use their bye-week break to flush away the disappointment of their first nine games. They'll hit the road to take on the Los Angeles Chargers on Nov. 22, trying to get an elusive first victory.