As offense stalls, Steelers defense tries to pick up slack 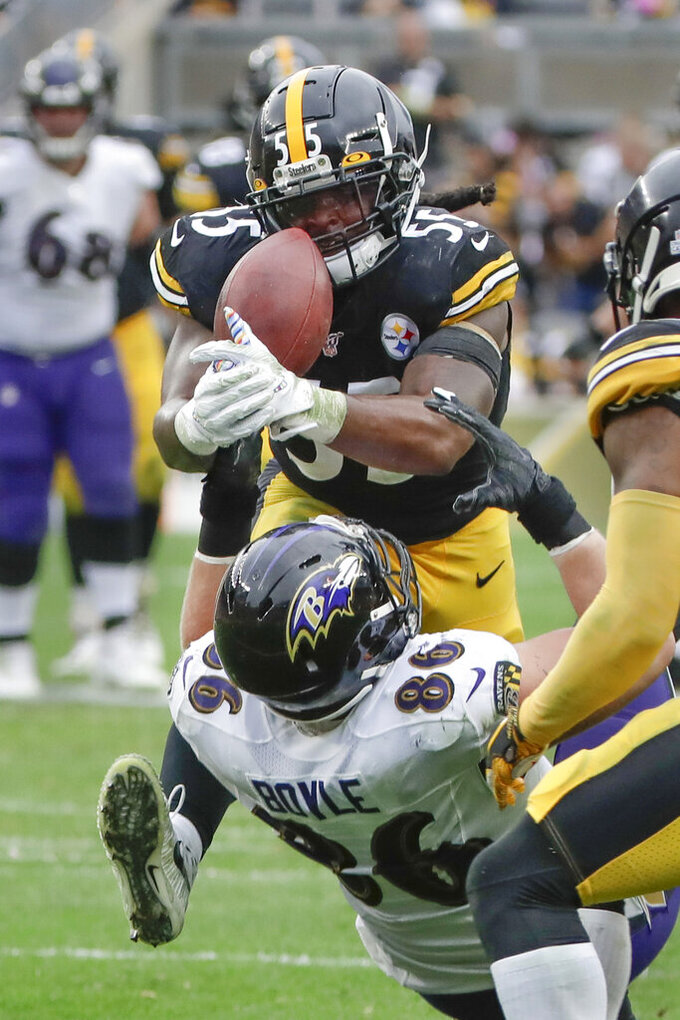 PITTSBURGH (AP) — The bold-faced names on the Pittsburgh Steelers defense kept repeating the phrase "ball awareness" over and over during the offseason, as if they could somehow speak the goal of creating more turnovers into existence.

It wasn't just empty jargon. For all the chaos of Pittsburgh's 1-4 start — from a steady stream of injuries at quarterback to a running game that's practically vanished to the vacuum left at wide receiver following Antonio Brown's departure — the defense is doing exactly what it set out to do after the team missed the playoffs last fall.

Sacks are up, with the Steelers ahead of the pace they set last season, when they tied for the NFL lead for 52. And the group that created 15 takeaways in all of 2018 already has a dozen through five games heading into Sunday night's visit to the Los Angeles Chargers (2-3).

The balance of power in the locker room has shifted dramatically from one side of the ball to the other. Considering the investment the Steelers have made on defense over the past decade, maybe it's not surprising. The top of the depth chart includes seven first-round picks, a total that doesn't include rookie inside linebacker Devin Bush, taken 10th overall in April.

Yet Heyward knows his team needs more, perhaps a lot more, if it is going to somehow pick itself up off the mat without quarterback Ben Roethlisberger, done for the season with an elbow injury. The wiggle room the defense enjoyed during the "Killer B" era is gone.

Roethlisberger is out until 2020. Le'Veon Bell is running in place for the winless New York Jets and Brown is in a self-induced purgatory after getting cut by New England last month. Things have gotten so strained at quarterback that rookie undrafted free agent Devlin Hodges figures to get the start against Los Angeles. The receivers are a muddled mess behind JuJu Smith-Schuster and running back James Conner — a Pro Bowler last year — is averaging 3.3 yards per carry.

This isn't the first time in team history the offense has been ravaged by injuries. The 1976 group lost quarterback Terry Bradshaw for an extended period, forcing the Steelers to turn to rookie Mike Kruczek. Kruczek threw for exactly zero touchdowns in six starts, a span in which he went 6-0 thanks to a defense riddled with Hall of Famers that allowed 28 points over the final nine weeks.

"Man, we've got to get back to that," Heyward said with a laugh.

Or at least the 2019 equivalent. More than four decades removed from one of the greatest defensive runs in NFL history, things have changed. The rules are slanted heavily toward the offense. Ripping off five shutouts in nine weeks as the 1976 Steelers did is basically impossible.

Still, there are signs the current group could be plenty disruptive in its own right.

The communication issues that popped up during a 30-point thumping by New England in the season opener have quietly been ironed out. Safety Minkah Fitzpatrick — acquired in a trade with Miami last month — has fit right in. Defensive end Stephon Tuitt is in the midst of a breakout season. Though figuring out ways to cover tight ends that typically have at least a 6-inch height advantage, the 5-foot-11 Bush already has three fumble recoveries and picked up his first career interception with a leaping grab against Baltimore last Sunday. Outside linebacker T.J. Watt is becoming a fixture around the ball, with 3½ sacks, a pick, a forced fumble and two fumble recoveries.

The "Steel Curtain" it's not. Yet the "splash" plays coach Mike Tomlin covets have become weekly occurrences. If Pittsburgh wants to stay competitive while the offense tries to sort itself out, they have to be.

A year ago, Pittsburgh found itself regularly in position to make an impact only to let opportunities get away. In a 33-30 loss to the Chargers on Dec. 2, the Steelers were comfortably ahead in the second half when cornerback Joe Haden and safety Sean Davis slammed into each other while trying to break up a pass in the end zone. The ball popped up into the hands of Los Angeles wide receiver Keenan Allen, sparking a comeback that sent Pittsburgh into a late tailspin.

"One we should have picked," defensive coordinator Keith Butler said.

It hasn't been an issue over the past month. Haden pointed to a forced fumble by Watt against Seattle in Week 2 as proof. Three times early in the game Watt made it a point to attempt to punch the ball out of the hands of a Seahawks player. Twice he missed. On the third attempt, he didn't. The ball bounced onto the Heinz Field turf and into the awaiting arms of linebacker Mark Barron to give the Steelers the ball deep in Seattle territory.

The key, Haden said, is consistency and the mindfulness to stay aggressive. All that chatter about "ball awareness" wasn't just talk. The Steelers have turned their words into actions.

"We can be a top-five defense easily," Haden said. "All we got to do is continue to communicate, continue to be on the same page. As long as we've got a body on a body it's tough for us to get beat."