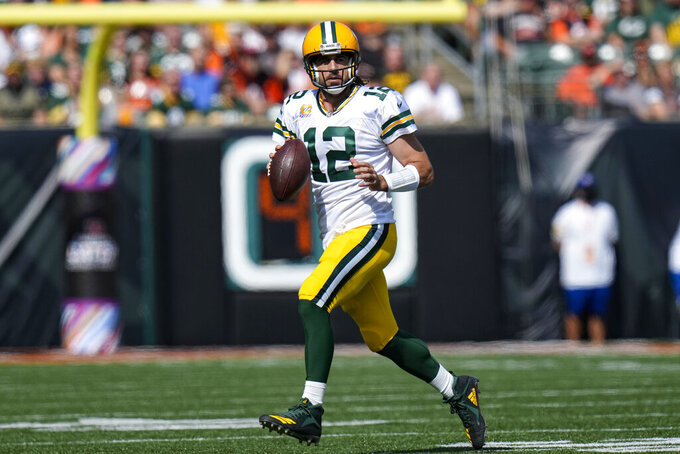 GREEN BAY, Wis. (AP) — The Green Bay Packers aren’t striking gold as often as before whenever they get near the goal line. It’s been an entirely different story for Packers opponents.

Green Bay boasted the NFL’s best red-zone offense last season, though the Packers call that area the gold zone instead as a nod to offensive coordinator Nathaniel Hackett’s love for the Mike Myers movie “Austin Powers in Goldmember.”

This year, they’re not capitalizing nearly as often when they get inside an opponent’s 20-yard line. The Packers are scoring touchdowns on 55% of their red-zone possessions – down from a league-high 76.8% last year – to rank 27th out of 32 NFL teams.

“We’ve done a lot to get down there,” running back Aaron Jones said. “Now it’s time to finish it. We can’t be content with three points. We’ve got to get that six. It makes a difference. We’ve just got to lock in a little bit more.”

The offense’s struggles once the Packers reach the 20 are particularly glaring because Green Bay opponents have scored touchdowns each of the 13 times the Packers have allowed them to reach the red zone.

Green Bay (4-1) still has managed to win four straight heading into Sunday’s game at Chicago (3-2). That may explain why Packers coach Matt LaFleur says he isn’t about to panic over the Packers’ red-zone concerns.

LaFleur acknowledged the Packers’ need to improve their red-zone efficiency this week, but expressed confidence they would do just that. When LaFleur received multiple follow-up questions on the topic, he said that “stats are for losers” and noted the Packers’ four-game winning streak.

One day later, LaFleur offered explanations regarding his comment on stats. He said the Packers do rely on analytics but also look beyond the numbers.

“We use every information that we can get our hands on,” LaFleur said. “But ultimately, we’ve got to look at the tape and try to figure out the why’s behind whether you’re successful or unsuccessful.”

Although Green Bay hasn’t stopped opposing offenses once they get near the goal line, the Packers have allowed teams to reach the red zone on just 13 drives. Only four teams have yielded fewer red-zone possessions.

“Obviously we have to be better in the red zone,” safety Adrian Amos said. “I think we’ve played really well on defense lately. That one area, that’s just an area we have to start being better at.”

The red-zone issues on offense are more concerning, if only because they represent such a major contrast from a year ago. Hackett believes Green Bay’s extraordinary red-zone success in 2020 caused opponents to take note and make sure it didn’t happen again.

The issue was particularly glaring in the Packers’ 25-22 overtime victory at Cincinnati on Sunday because they had two trips to the red zone in which they didn’t score at all. Mason Crosby missed two field-goal attempts after the Packers advanced beyond the 20.

“I think we can keep being more aggressive in those areas,” quarterback Aaron Rodgers said. “And more aggressive doesn’t mean throw the ball more. It just means we have a ton of scheme down there and let’s keep rolling it off the sheet.”

“It’s something that I talked to Matt about,” Adams said. “We’ve all kind of been conversing about the ways we can get better in the red zone and get back to what we kind of made our identity last year.”

If the Packers don’t regain that identity soon, they might need to take drastic measures.

“If anybody can get a hold of Mike Myers, I would really love anybody’s help,” Hackett joked. “We might need him to come in and help us out.”

NOTES: CB Kevin King won’t play Sunday after injuring a shoulder in the Bengals game. The Packers already are playing without 2020 Pro Bowl CB Jaire Alexander (shoulder). … LaFleur said OL Elgton Jenkins, who has missed three straight games, will be a game-time decision. Jenkins has practiced this week. … Green Bay put WR Malik Taylor on the reserve/COVID-19 list. ... LaFleur was noncommittal on whether LB Jaylon Smith would make his Packers debut Sunday. “We just want to make sure he’s comfortable and ready to go before we put him out there,” LaFleur said.