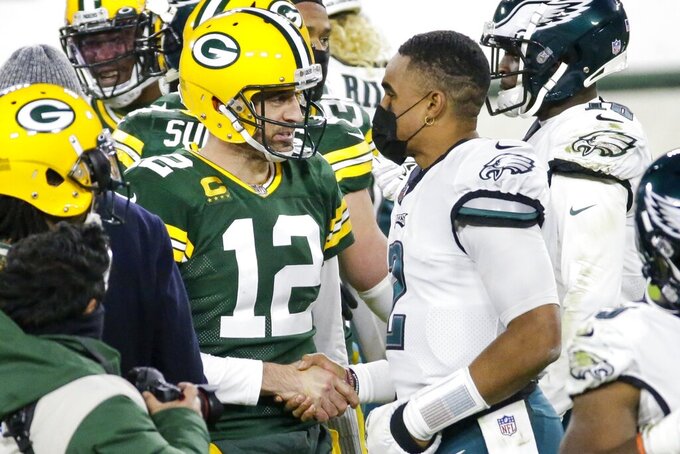 GREEN BAY, Wis. (AP) — On a day when Green Bay’s Aaron Rodgers and Davante Adams reached personal milestones, the Packers needed a long run from Aaron Jones to put the Eagles away.

Jones rushed for 130 yards and delivered a game-clinching 77-yard touchdown with 2:36 left as the Packers produced seven sacks and withstood a fourth-quarter comeback attempt to defeat Philadelphia 30-16 on Sunday.

“We ran a similar play the play before, and I felt like I was close to breaking it, somebody just got a hand on me,” Jones said of his career-long burst. “A-Rod called a similar play in the huddle, and I knew if I see a little crease, I’d be able to break it.”

Rodgers and Adams provided much of the highlights early in the game as Green Bay (9-3) built a 23-3 lead before the Eagles (3-8-1) scored two touchdowns in a span of just over a minute. Philadelphia’s comeback started after rookie quarterback Jalen Hurts took over for an ineffective Carson Wentz.

“We needed a spark,” Eagles coach Doug Pederson said. “We needed something to go our way, so I put Jalen in the game.”

Rodgers connected with Adams on two of his three touchdown passes to increase his career total to 400, becoming the seventh player to join that fraternity.

The only other players with at least 400 touchdown passes are Tom Brady, Drew Brees, Peyton Manning, Brett Favre, Dan Marino and Philip Rivers.

“Those are fun milestones for sure,” said Rodgers, who went 25 of 34 for 295 yards. “I’m not sure how long I’m going to be able to hold on to the second one. There’s some really good young quarterbacks who I’m guessing are amassing some numbers in that vicinity.”

After catching Rodgers’ 400th touchdown pass, Adams made sure the two-time MVP got the ball back. Rodgers doesn't have the footballs from his 100th, 200th or 300th touchdown passes. James Jones, who caught No. 100, tweeted Sunday that he threw the ball in the Georgia Dome stands.

Adams, who caught 10 passes for 121 yards, has scored in seven straight games to tie Hall of Famer Don Hutson’s franchise record. Hutson had a pair of seven-game TD reception streaks in 1941-42 and 1943-44.

Rodgers put the Packers ahead for good with a 1-yard pass to Adams on fourth down in the second quarter. He threw a 25-yarder to Robert Tonyan later in the second. His 400th touchdown pass was a 9-yarder to Adams that capped a 99-yard drive in the third period.

The Eagles forced a second straight three-and-out, but couldn’t move the ball and punted. That’s when Jones put away the game.

Jones ran through a big hole in the middle of the line, broke an attempted ankle tackle and headed downfield as a second defender made an unsuccessful diving attempt to stop him. He raced down the left sideline, eluded a defender inside Philadelphia’s 30-yard line and worked his way through traffic to reach the end zone.

“If it’s up to me, I’m taking every one to the house,” Jones said. “That’s my goal on every run. I know if I’m able to get a crease or break an arm tackle or something like that, it can turn into a big run.”

Hurts was 5 of 12 for 109 yards with an interception to go along with his touchdown pass. Wentz was 6 of 15 for 79 yards. An offensive line using its 11th different starting combination in 12 games struggled to protect both of them.

“Obviously, that’s frustrating as a competitor,” Wentz said of his removal. “I want to be the guy out there. At the end of the day, we lost. As a team, we lost, and that’s what I’m most frustrated about.”

The Packers visit the Detroit Lions.