Panthers' Bozeman carted off from practice with leg injury 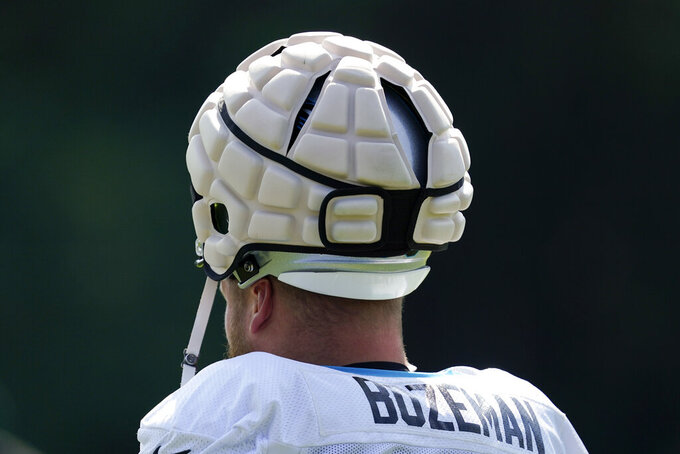 Carolina Panthers' Bradley Bozeman arrives for the NFL football team's training camp wearing his helmet with a protective covering at Wofford College on Tuesday, Aug. 2, 2022, in Spartanburg, S.C. The NFL has made the use of Guardian Caps mandatory up until the second week of the preseason for offensive and defensive lineman, linebackers and tight ends. (AP Photo/Chris Carlson)

Bozeman got tangled up during an 11-on-11 period and was attended to by trainers for several minutes. He was able to sit upright and get to his feet on his own power. But he walked gingerly with trainers to a nearby cart before heading to the locker room.

The 6-foot-5, 325-pounder signed with the Panthers as a free agent this offseason after starting 48 of 49 games the last three seasons for the Baltimore Ravens.

Bozeman was brought in to improve the Panthers' offensive line, which allowed 52 sacks in 2021 — the fifth most in the NFL. He played left guard in 2019 and 2020 before moving to center last season.