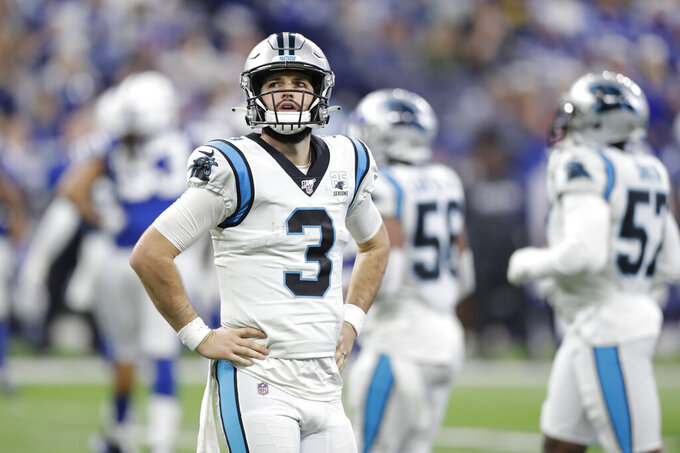 Carolina Panthers quarterback Will Grier (3) looks at a replay during the second half of an NFL football game against the Indianapolis Colts, Sunday, Dec. 22, 2019, in Indianapolis. (AP Photo/Michael Conroy)

CHARLOTTE, N.C. (AP) — It's pretty clear Ron Rivera won't be the only one losing his job with the Carolina Panthers.

The Panthers (5-10) lost their seventh straight game, a 38-6 debacle Sunday against the Colts on the road in Indianapolis.

It was a disaster in every way, shape and form. The offense managed a season-low six points with rookie quarterback Will Grier making his first NFL start, the defense allowed two more touchdowns on the ground — that's a league-high 28 on the season — and the special teams suffered a meltdown by allowing touchdowns returns 84 and 71 yards.

The utter dysfunction wasn't saved for the field, though.

Panthers interim coach Perry Fewell threw his punter under the bus for not doing his job. Defensive tackle Vernon Butler flipped off the crowd on the way to the locker room after being ejected for throwing a punch. And, longtime tight end Greg Olsen criticized the organization for having no direction.

Olsen, who is highly respected in the locker room and revered among fans, said the organization has hit rock bottom and said everyone from top to bottom has failed the fans.

“I think right now I’m not sure what our plan is," Olsen said. "I think we want to win now, but we want to build for the future. It’s just a really tough way to operate right now. Players are under-performing. I think it’s right now a very collective failure. Our fans deserve better. A lot of guys in this locker room deserve better. The coaches that have been here deserve better and it’s just been an overall failure.”

Interim coach Perry Fewell, who is 0-3 since taking over for Rivera, said he hasn't talked with Olsen or Butler yet.

"I think everyone is really frustrated at this time after losing seven games," Fewell said.

With owner David Tepper setting higher expectations for the organization and saying long-term mediocrity is not an option, expect sweeping changes up and down the roster, as well as within the coaching staff and front office.

Christian McCaffrey. He's been the only positive for the Panthers this season. He had 15 catches for 119 yards against the Colts, and needs 67 yards receiving Sunday against the Saints to join Roger Craig and Marshall Faulk as the only running backs in NFL history to record 1,000 yards rushing and receiving in the same season.

Will Grier. The third-round pick from West Virginia struggled against the Colts, completing 27 of 44 passes for 244 yards with no touchdowns and three interceptions. He twice threw into double coverage and was picked off. However, the Panthers specials teams did him no favors, by allowing two big punt returns in the first quarter putting the young QB in a 14-0 hole on the road. Fewell said Grier will start Sunday against the Saints.

Panthers draft pick. If there is any positive to the losing streak it is that the Panthers will get a better selection in April. As the season stands right now, Carolina would pick between sixth and ninth overall.

Butler. The Panthers' 2016 first-round pick lost his cool, throwing a punch at a Colts player Sunday to get himself ejected. To compound matters, Butler then stuck out his middle finger at the crowd on the way off the field. Fewell said the Panthers are discussing what the discipline will be. The league could also have a say in the matter. Butler has largely been a disappointment since coming to Carolina, although he has improved his play this season and appeared to be making some strides. Still, Butler will be a free agent and this could expedite his departure from the Panthers.

Cornerback Donte Jackson. Fewell benched Jackson two weeks after the young corner criticized the coaching staff for putting him in bad situations on defense. Jackson did not play on defense against the Colts. Fewell indicated cornerback Ross Cockrell will start again this week, leaving Jackson's future in Carolina tenuous at best moving forward.

Panthers wide receiver D.J. Moore left in the first quarter with a concussion and did not return. It would seem unlikely the team will rush Moore back into the lineup for a meaningless game against the Saints in Week 17, meaning his season is likely over. Before Sunday, Moore had averaged more than 100 yards receiving over the previous seven games and posted his first 1,000-yard receiving season.

Minus-12 — The Panthers' net average on punts after Nyheim Hines had three returns for 166 yards and two touchdowns. Fewell placed the blame squarely on punter Michael Palardy for failing to punt the ball out of bounds on both of those TD returns. Fewell said after Hines returned his first punt 40 yards to set up the Colts' initial touchdown of the game, he instructed Palardy to punt the ball out of bounds. However, Palardy didn't — and Hines returned punts of 84 and 71 yards for touchdowns. Fewell indicated that Palardy mishit one of the punts, but didn't offer an explanation on the other.

The Panthers finish out the season Sunday at home against the Saints and this one could get ugly. Carolina has several issues, while the Saints are still playing for a first-round bye and potentially home-field advantage throughout the playoffs.