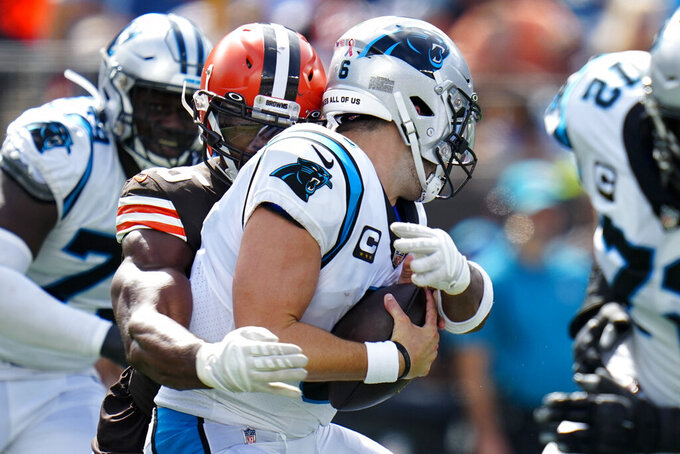 CHARLOTTE, N.C. (AP) — The NFL is a star-driven league. And when you have big-time weapons on offense, you need to get them the football.

When healthy, McCaffrey is one of the most productive players in the league. But he only touched the ball five times on the team’s first 27 offensive plays. The 2019 All-Pro finished with just 10 carries for 33 yards and four receptions for 24 yards — one of his worst games as a pro.

If Carolina’s plan is to keep McCaffrey fresh for the fourth quarter, they may want to think again — it's hard to play from behind in this league.

Moore is coming off three straight 1,150-yard seasons and is clearly Carolina’s most talented receiver. Yet he was only targeted six times, finishing with three catches for 43 yards. He got one carry for 7 yards.

“They have to touch the football, there’s no doubt,” coach Matt Rhule said Monday.

Rhule said the Panthers played about as badly as they could on offense in the first half, netting 13 yards on their first five possessions.

Carolina only ran 50 offensive plays and the opportunities were limited early. Baker Mayfield struggled with having five passes tipped at the line of scrimmage and four fumbled snaps. He was also sacked four times and the offense was out of sync for the majority of the first three quarters.

Moving forward, McCaffrey and Moore are the players new offensive coordinator Ben McAdoo needs to focus the offense around if the Panthers are to bounce back from back-to-back five-win seasons.

“The first half was just poor," Rhule said. "In the second half, once we started executing, you see Christian put two or three plays together and you see D.J. make an explosive play. We will have to pick up this week in terms of how we played in the fourth quarter.”

The only thing that really worked well for the Panthers was their fourth-quarter offense. Down 20-7, they scored on three straight three possessions, including a 7-yard touchdown run by Mayfield and a 75-yard TD strike to Robbie Anderson. Another drive ended with a field goal, giving Carolina the lead 24-23 with 1:13 left in the game.

Rookie LT Ickey Ekwonu, literally. The Panthers might need to give the No. 6 overall pick more help with chipping in pass protection until he begins to get his feet wet at the NFL level. Ekwonu surrendered back-to-back sacks to All-Pro DE Myles Garrett, one of which resulted in a fumble. Granted, Garrett is a tough draw out of the gate for Ekwonu, and he should get better as he plays more. Rhule downplayed both sacks Monday, saying Ekwonu didn't get the help he needed on one and that Mayfield should have gotten rid of the ball quicker on the other.

Anderson, who is coming off a highly disappointing season a year ago, turned in a big outing against the Browns with five catches for 102 yards — most of that coming on a 75-yard touchdown reception in the fourth quarter in which he used his speed to get behind the defense.

The Panthers' run defense is a concern. Nick Chubb and Kareem Hunt helped the Browns amass 217 yards on the ground on 39 carries, a 5.6-yard average. Overall, the Panthers missed 18 tackles resulting in 190 extra yards for Cleveland.

“Tackling was not our strong point, especially early on in the game,” Panthers safety Jeremy Chinn said.

Things won't get any easier on Sunday as the Panthers face Saquon Barkley, who ran for 164 yards in a 21-20 win over the Titans.

Returner Andre Roberts injured his knee against the Browns and his status for Week 2 is uncertain. Shi Smith would be the backup option.

4 — Number of fumbled shotgun snaps between center Pat Elflein and Mayfield against the Browns. “Poor execution by me,” Elflein said. “Baker and I talked about it. We addressed it and we got it fixed. We're going to work on it in practice and move on.” While Elflein took responsibility, at least two of those snaps hit Mayfield directly in the hands.

The Panthers travel to face the Giants (1-0) on Sunday before returning home for three straight games. Carolina has now lost eight straight dating to last season — the longest streak in the NFL.