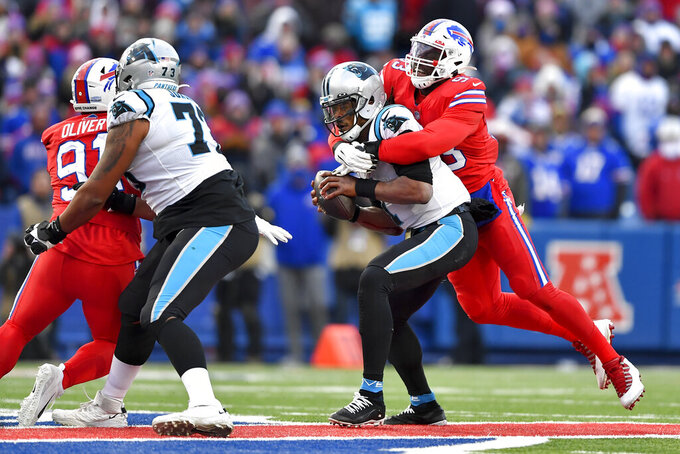 Rhule said Monday that he “can’t speculate” on who’ll be the team’s starting quarterback this Sunday when the Panthers host Tampa Bay.

The Panthers’ second-year head coach said he'll “continue working” with Newton, but added that he wants to see where Sam Darnold’s shoulder is on Wednesday when the team returns to practice. Darnold remains on injured reserve, but stepped up his throwing last week.

"We will find out about Sam and his health. I'm not going to look into the future, no hypotheticals," Rhule said of Darnold, who went on IR on Nov. 10 with an incomplete fracture of his shoulder blade. “If Sam is healthy we will practice him and see where he's kind of at. I think it is a good opportunity to shake some the rust off and see where he's at."

Newton threw for a touchdown and ran for another score in a 31-14 loss to Buffalo on Sunday, but he also tossed another interception and his poor decision-making and inability to consistently complete passes down the field continue to be an issue for the Panthers (5-9).

Any hopes of a fairytale ending where the 2015 league MVP would help his former team turns things around have vanished. Carolina has lost nine of its past 11 games.

Rhule called Newton the “ultimate competitor” on Monday, and praised him for his hard work.

But that came one day after he criticized the team's lack of a downfield passing game and Newton's decision-making. The Panthers only took one shot down the field, but Newton couldn't complete the ball to an open D.J. Moore.

Rhule also questioned Newton's decision to throw to wide receiver Robby Anderson on a key fourth-and-1 zone-read play instead of running the ball as was designed.

“It shouldn’t be thrown. It’s a zone read. There’s a bubble on there in case an unblocked blitzer comes,” Rhule said. “The MIKE (linebacker), we had that guy blocked so that’s just an error by the quarterback. It should be a handoff."

Newton has now lost 12 straight starts for Carolina going back to 2018 and it's become clear that he, like Teddy Bridgewater and Darnold before him, is not the answer at quarterback. P.J. Walker, who is 2-0 as an NFL starter, doesn't appear to have Rhule's support either as a short-term or long-term starter.

Defensive end Yetur Gross-Matos took advantage of some increased playing time against the Bills and had 2 1/2 sacks of Josh Allen. The 2020 second-round pick is expected to see an increased role moving forward.

Pretty much everything, but Carolina's downfield passing has been virtually non-existent. Carolina's only pass play of longer than 20 yards came when Newton found running back Ameer Abdullah underneath for a 23-yard catch-and-run touchdown. The Panthers are getting almost nothing down the field. Carolina ran for 151 yards on Sunday, but Rhule said, “at the end of the day I think it really just comes down to our ability to throw the ball and create some explosive plays.”

Safety Jeremy Chinn. The second-year safety has been one of the team's bright spots. Chinn led Carolina with seven tackles and intercepted Allen to set up a touchdown. Chinn needs two more tackles to become only the third player in Carolina history to have 100 tackles in his first two seasons, joining Jon Beason and Luke Kuechly.

Penalties. The Panthers were without starting defensive tackle and 2020 first-round draft pick Derrick Brown after he went on the COVID-19 list on Saturday. That meant more playing time for Bravvion Roy and Phil Hoskins. But both were flagged for costly penalties that allowed the Bills to keep touchdown drives alive. Brian Burns also had a costly penalty as self-inflicted issues continued to haunt the Panthers. “Really 10 points to me comes off of undisciplined plays by our defensive linemen,” Rhule said.

Carolina will bring in some kickers for a tryout this week after Zane Gonzalez injured his quadriceps prior to kickoff Sunday and was unable to play. The Panthers were left without a kicker, so they didn't try a field goal or extra point. Wide receiver Brandon Zylstra handled kickoffs after the team held “tryouts” before the game. The Panthers finished 1 of 4 on fourth down conversions and 1 of 2 on 2-point conversions.

Things aren't going to get any easier down the stretch for the Panthers, who have lost nine of their past 11 games and are simply playing out the schedule. They'll host a highly motivated Tom Brady on Sunday after the Buccaneers were blanked 9-0 on Sunday by the New Orleans Saints. Carolina then finishes on the road at New Orleans and Tampa Bay.