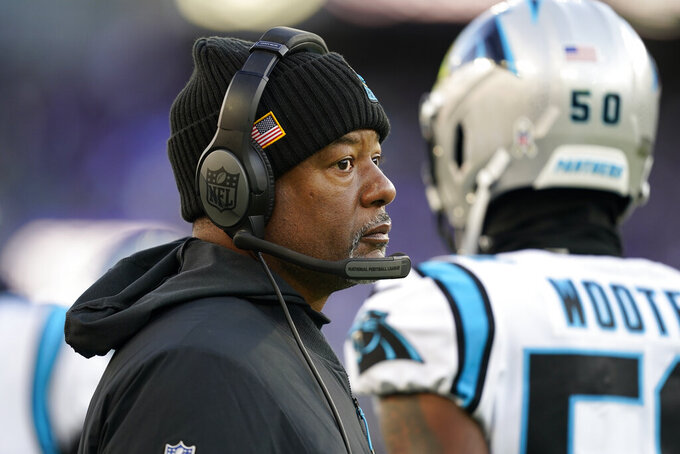 CHARLOTTE, N.C. (AP) — Steve Wilks is building a solid case to become the next full-time head coach of the Carolina Panthers.

And he’s doing it his way.

Wilks became the team’s interim head coach on Oct. 10, inheriting a team that was floundering at 1-4 under Matt Rhule. The Panthers have gone 3-4 since, including a 23-10 win over the Denver Broncos on Sunday.

Wilks has clearly won the support of the players in the locker room, but what's still uncertain is if his current body of work will be enough to convince billionaire owner David Tepper to lift the interim tag.

Tepper hasn’t discussed Wilks’ future publicly and there are still five games remaining in the season — all of which could go a long way toward determining Wilks’ fate.

What would help Wilks' cause would be getting some wins against quality opponents, winning on the road — the Panthers are 0-5 away from Bank of America Stadium — and capturing the NFC South.

Despite a 4-8 record, the Panthers are only 1 1/2 games behind first-place Tampa Bay (5-6) so anything can happen.

Wilks said he communicates with Tepper regularly, but those conversations have been focused on what the team is doing now.

“We don't get into the future,” Wilks said. "I'm not about the future right now. It's about winning the day. As I've said from day one, I've got 13 weeks and I'm going to try to do it my way within those 13 weeks and whatever happens at the end, we'll deal with it.”

Players have come to realize that the “Wilks way” includes brutal honesty.

Last week, for instance, he challenged his star players to step up during a team meeting, going as far as to put each of their pictures and names up on the wall for all to see. Players said they didn't feel as if they were being called out in a negative way.

The Panthers responded with a solid win over Russell Wilson and the Broncos with several star players such as Brian Burns, D.J Moore and D'Onta Foreman playing huge roles in the victory.

“It lets you know how highly he thinks of the star players on this team and he wants us to play to our potential," said Burns, who had two sacks and a forced fumble on Sunday. ”Guys took that into consideration and went out there and balled. Whatever he did worked."

Quarterback Sam Darnold also came up big in his first start of the season with a touchdown passing and rushing in the victory.

“I feel like that sheer honesty is respected amongst men," Darnold said.

Offensive line. No position has seen as much improvement since last season as the offensive line. The additions of veteran free agents Austin Corbett and Bradley Bozeman along with first-round pick Ickey Ekwonu have helped fortify the line and reinvigorated the running game.

Carolina ran for 185 yards against the Broncos and Foreman has now had four 100-yard rushing games in the past six outings.

“We have found our identity,” Darnold said of running the football.

Third down offense. Despite their success on the ground, the Panthers continue to struggle on third downs, converting just 2 of 12 attempts in the win over the Broncos. They remain last in the league in that category, converting just 27% of their opportunities.

DE Brian Burns. Burns had two sacks against Wilson on Sunday, including a strip-sack, to give five in the past four games and a career-high 10 on the season. He now has 35 1/2 in the past three-plus seasons and is elevating his game to elite status. Burns will become an unrestricted free agent after the season and his asking price is likely going up with each passing week.

Baker Mayfield. It's unclear what will become of Mayfield moving forward.

Wilks said Darnold will start after the bye week against Seattle and that he's waiting to hear on P.J. Walker's ankle before making a decision on who'll be the backup. If Mayfield sinks to the No. 3 on the depth chart it will mean he is inactive on game day — and that may not sit well with the 2018 No. 1 draft pick.

At that point, you would have to wonder if the Panthers would simply go ahead and waive Mayfield and open a roster spot for another player since teams rarely keep three QBs anymore.

Panthers S Xavier Woods left Sunday's game with a knee injury and his status entering the bye week remains uncertain. Indications are there is a good chance the Panthers will get Walker (ankle), DT Matt Ioannidis (calf), S Myles Hartsfield (ankle) and LB Cory Littleton (ankle), — four players who sat out the Denver game — back on the field following the week off.

17-29 — The combined record of the four teams the Panthers have defeated. Carolina has not beaten a team with a winning record.

The Panthers get a needed week off with a late-season bye this week, which should help them regroup for the stretch run and overcome some illnesses that have plagued the locker room in recent weeks.

The Panthers are only 1 1/2 games behind the Tampa Bay Buccaneers (5-6), so the division is up for grabs.