Paralyzed at 19, Buoniconti has mixed feelings on football 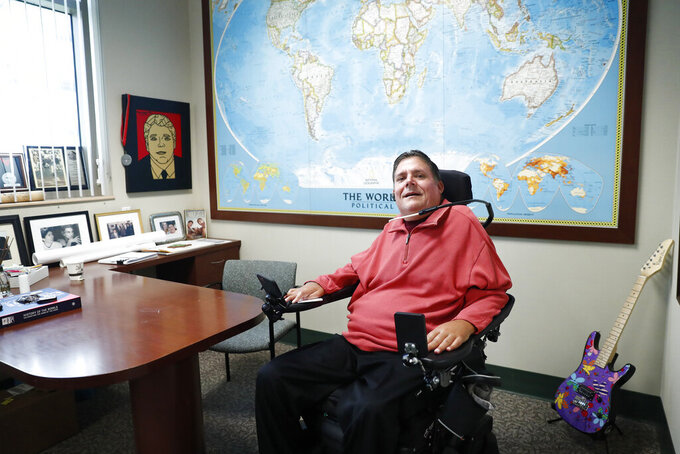 In this Wednesday, Jan. 22, 2020 photo, Marc Buoniconti, who was paralyzed from the shoulders down making a tackle in college in 1985, poses for a portrait in his office at the The Miami Project to Cure Paralysis in Miami. As the Super Bowl returns to Miami this week, Marc has mixed feelings about the sport. (AP Photo/Brynn Anderson)

MIAMI (AP) — With the Super Bowl coming to town, Marc Buoniconti sat in his office talking about the Chiefs-49ers matchup and wondered who was favored, so he looked at the phone strapped on the right arm of his wheelchair.

“Siri, what is the current point spread for the Super Bowl?” Buoniconti asked.

Answer: Chiefs by one.

Another answer: Yes, despite it all, Buoniconti still loves football.

Like no other family, the Buonicontis have experienced football glory and grief. Marc was paralyzed from the shoulders down making a tackle in college in 1985. His father, Nick, a Pro Football Hall of Fame linebacker, died last July after struggling with symptoms of CTE, a degenerative brain disease associated with repeated blows to the head.

Marc will watch Sunday's game, but like many fans these days, he has mixed feelings about the sport and its toll. And his emotions are drawn from firsthand experience.

“It's such a love-hate relationship with the game,” said Buoniconti, sitting by a sunny window at the Miami Project to Cure Paralysis. "Football opened up every door for my family, right? And then I had my injury, right? Football put me in my chair. And then who knew years and years later the toll it would have on my father.

“You look at everything football gave to the Buonicontis, but look at what it took away at the end.”

Marc's older brother, Nick III, chuckled slightly when asked later about what football has done for — and to — their family.

“You mean the blessing and the curse?” Nick said.

Their father played on back-to-back Super Bowl championship teams with the Miami Dolphins and helped them achieve the NFL's only perfect season in 1972. Marc was then 6, went to home games and fondly remembers hanging out in the locker room at the Orange Bowl.

“After his last game," Marc said, "he walked off the field and got down on his hands and knees and kissed the ground and said, ‘Thank God I spent 15 years playing NFL football and had a great career, and I’m able to walk off the field with no lingering injuries.'

"Little do you know all that wear and tear would eventually impact him.”

Nick, who enjoyed a successful career after football as a broadcaster and tobacco industry executive, was in his 70s when he began having trouble walking and talking.

He gave up golf and driving, and became isolated and depressed.

“It was a challenging last couple of years watching such a strong man deteriorate,” Marc said. "Toward the end it was a rapid decline. It was really, really hard."

But Marc said he and his father didn't blame football for their fate.

Dad's death created a void for the family, and also at the Miami Project, the spinal cord and brain injury research center at the University of Miami Miller School of Medicine.

Marc has long worked for the center to raise money and awareness, but the role changed as his father declined.

"Marc really had to step up, so to speak, even though he can't move,” said Dr. Barth Green, who helped Nick Buoniconti start the Miami Project after Marc was paralyzed. "Nick was always the power generator in the Project, and Marc has always been sort of in the shadow.

“Now, Marc has done wonderfully with administrative issues, fundraising, strategic planning and meeting with the scientists. He's a well-rounded human being with great skills, and we never really appreciated it because Nick was bigger than life.”

Marc, 53, goes to the office three or four days a week, even though it takes him hours to get ready. He looks the part of an administrator, wearing a phone earbud as he drums up support.

“Let’s give back to others who are less fortunate,” he said at one point.

Buoniconti lives in a large house on an acre near where he grew up, his yard full of fruit trees. He has a longtime girlfriend and would like to marry, but must stay single to keep his insurance.

His face is expressive in conversation, perhaps to compensate for his immobility, and he still has the neck of a football player. He has outlived his prognosis and said his health is generally good, adding, “Knock on wood” without noting the remark's dark humor.

“His spirit is still so strong,” his brother said. “It seems he's never in the dumps about it. He wakes up every day and makes a difference in people's lives.”

But he must breathe through a tube to navigate his wheelchair, and a nurse is on standby 24 hours a day to help with even basic tasks, such as mopping Marc's brow.

“I'm really content with my life,” Marc said. “I don’t look down and see myself in a wheelchair that much.”

Marc is pleased with progress made by the Miami Project, and optimistic trauma patients like him will someday walk again.

“Maybe it won't be a cure for Marc Buoniconti. But it will cure a lot of people,” he said. “And actually, we’ve already cured some people. We have dramatically improved people’s independence, and people are walking out of the hospital because of us.”

Some would avoid brain and spinal cord injuries if they didn't play football, he acknowledged. His father's illness changed his opinion about youth football, and he now believes kids should wait until high school to play.

He said he would try to steer young relatives away from contact sports at all, and he wonders about the long-term future of football given a recent decline in high school participation.

Still, Buoniconti is an enthusiastic spectator. He applauds the NFL's efforts to make the game safer, but sounds like many other fans when he expresses reservations about rule changes to restrict contact.

“It's not touch football,” he said. “It’s a tough balance between protecting the players and honoring the sport.”

On Super Sunday, Buoniconti plans to throw a private party at Pig Floyd Barbecue, a new restaurant he's opening with a friend from first grade.

He looks forward to watching a good game, but won't be surprised if a serious injury intrudes on the festive day.

Football, he said, is a dangerous sport.