Patriots, Bucs among those making biggest waves so far 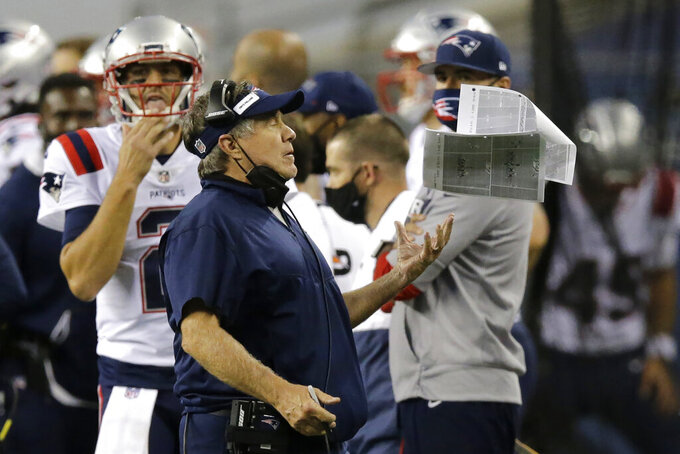 FILE - New England Patriots head coach Bill Belichick catches a packet of papers after he tossed them in the air during the second half of an NFL football game against the Seattle Seahawks in Seattle, in this Sunday, Sept. 20, 2020, file photo. Belichick never was one to spent wildly in free agency. Watching Tom Brady win another Super Bowl in another city sure changed that. The New England Patriots doled out $175 million in guarantees in the first 48 hours of free agency following a 7-9 stumble in 2020 that officially ended their two-decade dominance of the AFC. (AP Photo/John Froschauer, File)

Bill Belichick never was one to spend wildly in free agency. Watching Tom Brady win another Super Bowl in another city sure changed that.

The New England Patriots doled out $175 million in guarantees in the first 48 hours of free agency following a 7-9 stumble in 2020 that ended their two-decade dominance of the AFC.

The jaw-dropping spending spree netted tight ends Jonnu Smith and Hunter Henry and receivers Nelson Agholor and Kendrick Bourne for an offense that went from proficient to pitiful without Brady under center.

The Pats also traded for a left tackle and got Kyle Van Noy back in what amounted to a stunning about-face for a franchise whose fans relished poking fun at the big spenders trying, usually in vain, to catch up as the Patriots piled on the points and parades.

After watching Brady, at 43, throw TD passes like he was 23 again, then nonchalantly toss his seventh Lombardi Trophy over the Hillsborough River waters during the Buccaneers’ celebration of their dismantling of Patrick Mahomes and the Chiefs, Belichick — and his boss, Robert Kraft — had seen enough.

“We are excited about the additions to our roster so far this year. Whether by trade, free agency or re-signings, the group brings a good mix of offense, defense and special teams. It was great to see them in the building, including some familiar faces, and we are all looking forward to continue building toward the upcoming season.”

Drab and droll as usual, sure. But there’s nothing common about the Patriots’ offseason maneuvering. With the makeover continuing with 10 picks in next month's draft, the rest of the NFL is about to see just how much Belichick and Kraft hate losing.

The Buccaneers, who won the Super Bowl with every one of their 31 points coming from players who hadn’t been on the team in 2019, are big winners this offseason, too.

The Bucs also franchised wide receiver Chris Godwin, and keeping all these stars in the fold might very well keep Brady & Co. atop the NFL in 2021 no matter how much his former team spends to play catch-up.

While the old-timers in New England restocked their roster, newcomer GM George Paton got off to a fast start in his quest to rebuild the Denver Broncos, which will go a long way in showing his worthiness as John Elway’s front office successor.

After serving a lifetime as Vikings executive Rick Spielman’s right-hand man, Paton has quickly made his mark as the main man in Denver.

“Well, George became my best friend this week,” Harris cracked after signing a three-year, $27 million contract a year after he had to settle for a one-year, $2.5 million deal.

Paton, who also signed former Vikings backup running back Mike Boone, agreed to rescind the right-of-first refusal tender he’d placed on the fourth-year running back and fan favorite who grew up in Denver and went to the University of Colorado.

Lindsay quickly signed a one-year deal with Houston, which has turned over its roster even more so than New England has this month.

Some other teams that made an early splash are the New York Giants, Washington and Cleveland, which grabbed two of the Los Angeles Rams' secondary stalwarts in safety John Johnson and cornerback Troy Hill.

While the Patriots and Broncos had plenty of cap room available, most teams had their belts squeezing them pretty tight with the $182.5 million salary cap, an 8% reduction from 2020 because of the pandemic.

And some teams just didn't make the splash their fanbases expected in free agency.

— The Bears had hoped to solve their decades-long quarterback quandary by persuading the Seahawks to part with disgruntled star Russell Wilson. When that didn’t happen, the Bears had to part ways with Fuller, who landed in Denver, to clear cap room for new QB Andy Dalton.

The Lions didn’t do much in free agency but nobody in Detroit should be bothered. The Lions are focused on rebuilding through the draft after sending QB Matthew Stafford to the Rams and then letting star wide receiver Kenny Golladay walk in free agency.

Golladay joined Simmons and Barrett among the biggest winners this month when he signed a four-year, $72 million deal with the Giants.