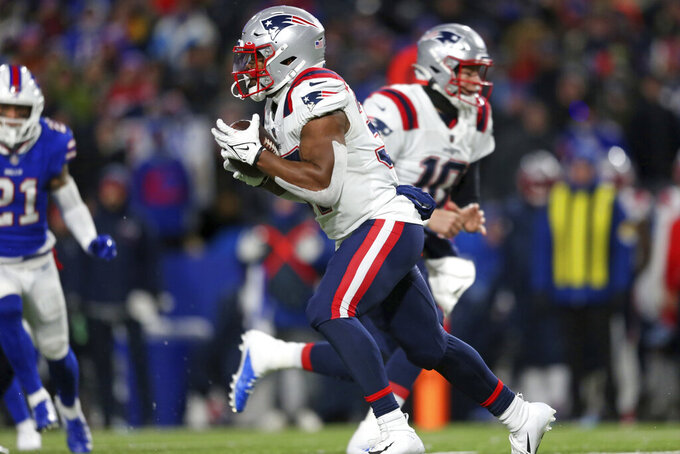 New England Patriots running back Damien Harris, center, takes a hand off from New England Patriots quarterback Mac Jones (10) for a touchdown during the first half of an NFL football game against the Buffalo Bills in Orchard Park, N.Y., Monday, Dec. 6, 2021. (AP Photo/Joshua Bessex)

“Hats off to the offense. Really everybody, probably besides Mac,” Judon said breaking into a smile. “He didn’t really do nothing besides hand the ball off.”

No offense taken. With 40 mph wind gusts placing an emphasis on running the ball, Jones was more than content in being relegated to handoff duty in New England’s 14-10 win over the Buffalo Bills on Monday night.

Jones completed just two of three pass attempts for 19 yards in essentially standing back and watching the Patriots backfield literally run away with their seventh consecutive win and shore up New England’s familiar place atop the AFC.

“Just a crazy game to be a part of,” Jones said.

“We knew it was going to be windy. You can’t control it. There is no on and off switch,” he added. “You just have to go out there and do your job, and for us to run the ball like we did was incredible.”

Damien Harris scored on a 64-yard run in an outing the Patriots out-gained Buffalo 222 to 99 in yards rushing. Nick Folk hit both field goal attempts from 34 and 41 yards with the wind at his back, and the Patriots defense limited the Bills to a season-low 230 yards offense.

Defensive back Miles Bryant sealed the victory by batting down Josh Allen’s pass at the goal line with Buffalo facing fourth-and-14 at New England’s 18 with 1:55 remaining. It came a series after Buffalo's Tyler Bass missed a 34-yard attempt wide right into the wind in a game the Bills managed 10 points on four drives inside the New England's 20..

“What a memorable game that will be for me in my career,” center David Andrews said. “One, it’s a win. Two, I don’t know if I’ve ever played in a game where we’ve thrown the ball three times. And I’ve been playing football since I was 6 years old, so that’s 23 years.”

The Bills continued their inconsistencies by losing four of their past seven, and have not won consecutive games since capping a 4-0 run spanning Sept. 19 to Oct. 10.

Though the two teams meet once more in Foxborough, Massachusetts, on Dec. 26, Buffalo’s path to repeat as division champions, never mind earn a third straight postseason berth, is suddenly muddied. The AFC’s wild-card race now features four teams with seven wins. The Bills also dropped to 5-5 against AFC opponents and 3-1 against division opponents.

Buffalo continues resembling the shell of a team which swept the season-series against New England last year for the first time since 1999, en route to its first 13-win season in 29 years.

“No excuse for it,” middle linebacker Tremaine Edmunds said. “They came in and they beat us. We’ve just got to get better. We've got to finish off the season strong.”

Easier said than done for a team which continues to have difficulty running the ball and stopping the run. Take away Allen’s six carries for 39 yards, and the Bills trio of running backs finished with 60 yards on 19 carries.

Buffalo’s defense has now allowed 200-plus yards rushing in two of its past three, after giving up a season-worst 264 in a 41-15 loss to Indianapolis two weeks ago.

Harris finished with a season-best 111 yards rushing and opened the scoring on New England’s ninth play from scrimmage. Facing third-and-5, Harris burst though a gaping hole up the middle and was untouched on his way to the end zone.

Rather than attempt the extra point into the wind, coach Bill Belichick succeeded on a 2-point conversion, with Brandon Bolden scoring just inside the left pylon.

Each team capitalized on the other’s mistakes in trading touchdowns in the opening quarter.

Buffalo responded on its next possession which was extended after N’Keal Harry slipped and had Matt Haack’s punt glance off his helmet, with Siran Neal recovering the ball at New England’s 14. Allen hit Gabriel Davis on a slant route on the next play to cut the lead to 8-7.

“You don’t plan on losing games, you know. It’s not part of the gig,” Bills center Mitch Morse said. “We understand the magnitude of what this meant and what this loss meant so it’s not lost on us. We understand that we have a lot of work to do to put ourselves in a position where we think this team can be.”

According to Elias Sports, the Patriots had the fewest yards passing and became the first team to attempt just one one pass in the first half since at least 1978. ... Jones became the NFL’s third quarterback to win nine games in his rookie season, joining Pittsburgh’s Ben Roethlisberger in 2004, and Dallas’ Dak Prescott in 2016. He also joined Roethlisberger and Prescott in becoming the NFL’s third rookie QB to win his first six road starts. ... Bass' 35-yard field goal with 6:35 left in the third quarter ended New England's four-game streak of not allowing a point in the second half.

The elements were at times overwhelming, including a wind-chill that dropped the temperature into the mid-20s.

One of New England’s Jake Bailey’s punts went sideways into the wind for 15 yards. Members of ESPN’s pre-game broadcast crew were blown off their chairs along the sideline, and the orange flags was ripped off the top of the left upright in the east end of the stadium.

Patriots: Enter bye week off, and return to play at Indianapolis Colts on Dec. 18.

Bills: Travel to play Tampa Bay Buccaneers on Sunday, with Tom Brady, 32-3 against Buffalo, holding the NFL record for most career wins by a quarterback against one opponent.