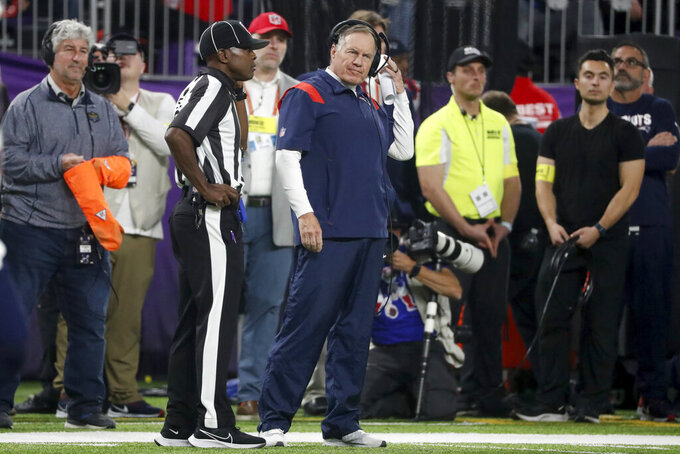 New England Patriots head coach Bill Belichick watches from the sideline during the first half of an NFL football game against the Minnesota Vikings, Thursday, Nov. 24, 2022, in Minneapolis. (AP Photo/Bruce Kluckhohn)

FOXBOROUGH, Mass. (AP) — For weeks, concerns about the Patriots have centered on the offense, which has struggled since Mac Jones returned from an ankle injury that forced him to miss three games.

Those worries were mostly assuaged on Thursday night at Minnesota. Jones threw multiple touchdown passes for the first time this season and went 28 of 39 for a career-high 382 yards and a season-best 119.8 passer rating.

But it still added up to a 33-26 loss, largely because New England still had issues finishing drives, going 3 of 10 on third down and 0 for 3 in the red zone.

“We’ve got some good opponents coming up in our division, and just got to look at the film and try and get better,” Jones said. “Definitely not the result we wanted, but there’s no time to kind of drag and feel sorry for ourselves.”

Jones and his teammates will have a full week to prepare for their Thursday night matchup with AFC East-leading Buffalo, the team that blew out the Patriots 47-17 in the wild-card round of the playoffs last season.

Bills quarterback Josh Allen is tied with the NFL lead in interceptions with 11 and will face a New England defense looking to bounce back from allowing Kirk Cousins to pass for 299 yards and three touchdowns.

New England’s injury-riddled offensive line has had issues avoiding penalties and protecting Jones. But a week after Jones was sacked six times for the second time this season, he went down only three times against the Vikings. As a result, he looked a lot more comfortable in the pocket and it made for a more fluent passing game.

If the Patriots are going to make the playoffs, they will have to be much better in situational football than they were on Thursday.

Trailing 16-13 late in the first half, the offense made two mistakes that contributed to New England setting for a field goal.

Hunter Henry failed to get out of bounds after a 22-yard catch along the sideline, forcing New England to use its second timeout. After two long passes to DeVante Parker, the ball was in the red zone when Jones began to scramble up the middle and took a sack. That necessitated the Patriots' final timeout of the half.

Parker. He had four catches for 80 yards, including a 40-yard grab in the third quarter to set up the Patriots’ go-ahead field goal.

Special teams. The unit saved the day last week against the Jets, clearing the path during Marcus Jones’ 84-yard punt return TD. This time it was a blunder by the Patriots’ kickoff team that produced Kene Nwangwu’s 97-yard TD return to tie the game in the third quarter.

“Really is the difference in the game,” coach Bill Belichick said. “Seven points that ended up being bonus points in the game.”

In the fourth quarter, Pierre Strong was flagged for running into the kicker penalty on a punt to keep a Vikings’ drive alive. It ended with Kirk Cousins’ 15-yard touchdown pass to Adam Thielen, which proved to be the decisive score.

The Patriots' stretch of three games over 12 days ends Thursday when they host Buffalo.