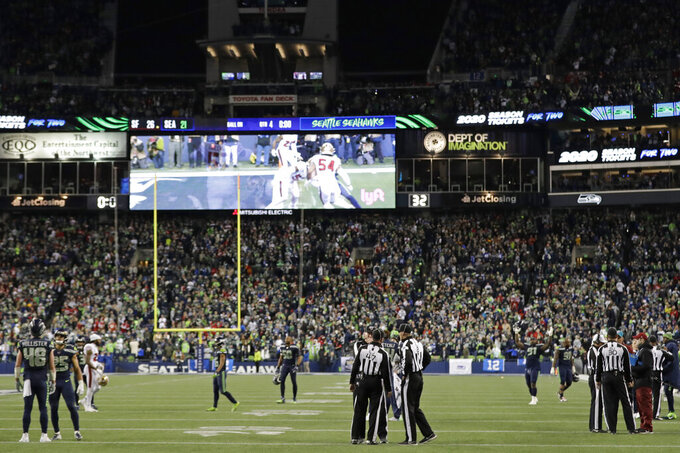 SEATTLE (AP) — The stage was set for a storybook ending, with the ball on the 1-yard line and Marshawn Lynch running out onto the field ready to score a division-clinching touchdown in his first game back in Seattle in more than four years.

Instead of a Beast Mode leap into the end zone, the Seahawks took a baffling delay-of-game penalty after confusion over personnel. So Lynch returned to the sideline and was only a spectator when Jacob Hollister was stopped inches shy of the goal line on fourth down in the closing seconds of a 26-21 loss to the San Francisco 49ers on Sunday night.

"It was a wild one," quarterback Russell Wilson said. "We had several different opportunities. We tried to make a play but sure enough, we came up a half-inch short there."

The chaotic closing sequence began when rookie John Ursua made his first career catch on fourth-and-10 from the 12 with less than a minute to play.

Ursua was stopped inside the 1 and the Seahawks (11-5) rushed to the line to spike the ball to stop the clock. There were still 22 seconds left for Seattle to get the winning score, but Lynch was late running on the field and the Seahawks took a delay of game at a most inopportune time.

"We were in no backs the play before. We called the personnel. We just didn't quite get it communicated with the backs and we were late," coach Pete Carroll said. "We were late getting in there and we burned the time. We just didn't get it done. We didn't function cleanly."

The Seahawks still had a chance to win, but Wilson missed a second-down pass to Tyler Lockett and then again on third down to Jacob Hollister on a play that featured contact from linebacker Fred Warner but no flag for interference.

"I felt him grabbing me, but you don't get every call," Hollister said. "I didn't get that call."

Officiating head Al Riveron said he reviewed the play and determined it didn't warrant a stoppage or an interference call.

Hollister then did get the ball on a fourth-down pass and appeared headed to the end zone before he was hit squarely by rookie Dre Greenlaw right at the goal line. Hollister tried to reach the ball over the plane before he fell and there was confusion at the end of the play, with the Niners rushing out on the field in celebration and the officials making no immediate signal.

Eventually, referee Tony Corrente said the play was under review and after a few minutes, Hollister was ruled down just shy of the goal line.

"It was obviously such a bang-bang play," Hollister said. "But after seeing the replay I really do think I got in. I'll have to watch it closer. Those guys do the best they can making calls. Obviously I got called down short. It is what it is."

Those couple of inches were the difference between the Seahawks opening the playoffs at home a division winner and traveling nearly 3,000 miles to Philadelphia to take on the Eagles (9-7) in the wild-card round on Sunday.

"It was so close," Carroll said. "If they called it a touchdown we probably win a championship instead of the other way around. It was as close as it can get. Sorry to the fans we weren't able to get another inch. That's what it was."

The ending spoiled what had been a celebratory return to action for Lynch, who came off his couch earlier this week to play his first NFL game in more than 14 months and his first in Seattle, where he dominated earlier this decade, in more than four years.

Lynch was signed after Seattle lost running backs Chris Carson (hip) and C.J. Prosise (arm) to injuries last week. After just a few days of practice, Lynch was welcomed back with a thunderous ovation in pregame introductions and when he came on the field for his first play.

"Straight love. That made your boy feel right at home," he said.

The comeback was dealt a little setback when Lynch was stopped on fourth-and-1 late in the first half, but he found his groove a bit in the second half with a couple of vintage runs, including a 1-yard leap into the end zone early in the fourth quarter. He finished with 34 yards on 12 carries.

"Just to see Marshawn dive in the end zone was awesome," Wilson said. "To have Beast Mode back, he had some amazing runs. Just the excitement when he came in the game, it just felt right."

But it didn't end that way for the Seahawks due to the delay-of-game call that prevented Lynch from having a chance at the winning score.

"I thought Marshawn would get the ball," linebacker Bobby Wagner said, "and we'd run it in for a touchdown."