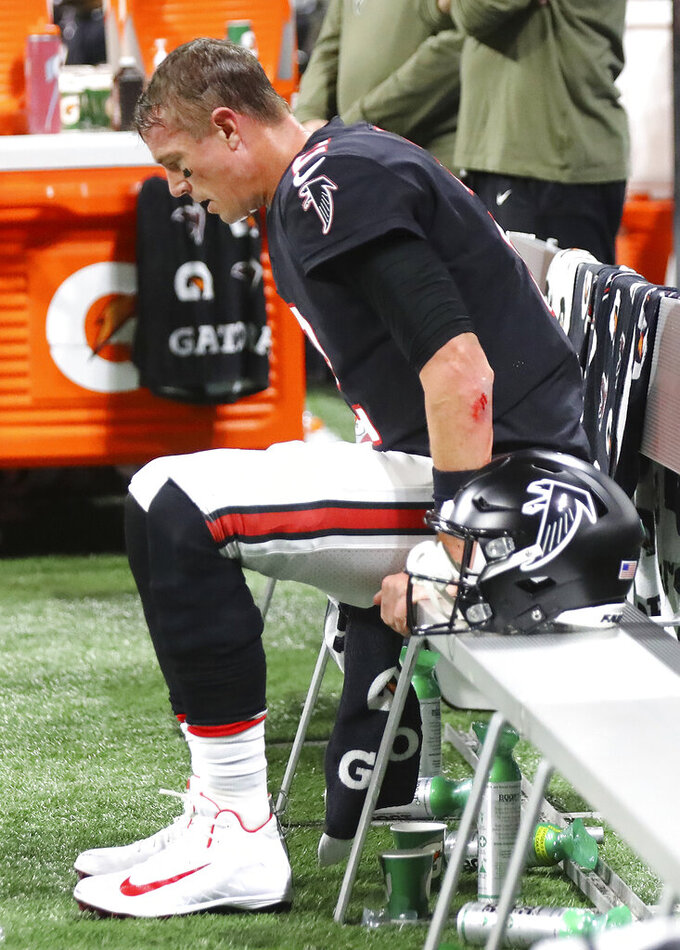 Atlanta Falcons quarterback Matt Ryan sits on the bench with a bloody elbow after getting banged up on a sack by the New England Patriots during the first half of an NFL football game, Thursday, Nov. 18, 2021, in Atlanta. (Curtis Compton/Atlanta Journal-Constitution via AP)

The star tight end was knocked out of Florida’s game against rival Georgia on a vicious hit a little more than a year ago. Pitts suffered a concussion, and his helmet twisted so sideways that his face mask fractured his septum. He had surgery, missed two weeks and considered opting out of the rest of the season.

Pitts ended up playing three more games before turning pro and becoming the fourth overall pick in the NFL draft. He returns to Jacksonville for the first time since when the reeling Atlanta Falcons (4-6) take on the woeful Jaguars (2-8) on Sunday.

“I don’t know if I’ve ever seen one like that,” Jaguars coach Urban Meyer said.

Pitts has been as good as advertised as a rookie, catching 43 passes for 635 yards and a touchdown. He has the third-most receptions for a first-year tight end through 10 games in NFL history.

Although he’s cooled over the past month – he has 12 receptions for 164 yards in Atlanta’s last four games – the 6-foot-4 mismatch nightmare will be the primary focus for Jacksonville’s defense.

“He’s absolutely a wide receiver,” defensive coordinator Joe Cullen said. “He’s as fast as any wide receiver out there. He’s bigger and they’ll move him around everywhere. … They’ll motion him and get him to exactly where they want to put him.”

With receiver Calvin Ridley (mental health issues) expected to miss his fifth consecutive game and Cordarrelle Patterson (ankle) banged up and splitting time between running back and receiver, it’s been nearly impossible for the Falcons to hide Pitts — and even harder to prevent opponents from double-teaming him.

Atlanta managed just a field goal in its last two games, lopsided losses to Dallas and New England in which the offense turned over the ball a combined seven times, failing to score a touchdown in consecutive games for the first time since 1987. The Falcons have gone 26 offensive possessions without finding the end zone.

Coach Arthur Smith knows the Jaguars well, though, having spent the previous decade working as an assistant with the Titans, and could find a pick-me-up against a defense that was downright awful in a 30-10 loss to San Francisco last week.

“We need to get back to playing smarter football,” Smith said.

Added veteran quarterback Matt Ryan: “Let’s do what we’re coached, let’s make sure we’re as fundamentally sound as we can be and let’s not have self-inflicted wounds.”

That could help them start getting the ball to Pitts more often.

“We work really hard every day to get them open and it takes all 11,” Smith said. “It’s a coordinated effort.”

Already without DJ Chark (ankle), the Jaguars will be without fellow receiver Jamal Agnew (hip) for the rest of the season as well.

Agnew had become the team’s most consistent big-play threat. Without him, Meyer expects Marvin Jones, Laviska Shenault, John Brown and Tavon Austin to get more opportunities. The Jags also signed Jaydon Mickens off Tampa Bay’s practice squad earlier this week. Mickens will immediately begin working as the team’s kick returner and could eventually get snaps at receiver.

The Falcons have failed to top 100 yards rushing in four of their five games. They finished with 40 yards on the ground last week against the Patriots and averaged 2.5 yards a carry.

Atlanta’s longest run of the season is 18, the only team in the league to not have any 20-yard carries.

“You’d like to get (some), and that’s what we’re working towards,” Ryan said. “We’re looking for ways to get better, create chunk runs. It makes things difficult on defenses. It opens up things in play-action pass. It helps slow down pass rush. It does a lot of those things.

“We’ve haven’t done as well up to this point as we would’ve liked, but I believe if we keep working at it, they’re going to come. We’ve just got to keep hammering away at it.”

Jacksonville has lost 14 consecutive games to NFC teams, a strange skid that spans four seasons. The streak includes an 0-3 mark this year.

The Jags’ last victory against someone from the other conference came in the 2018 season opener against the New York Giants. Jacksonville is 7-44 in its last 51 games against the NFC, a stretch of futility that dates to 2008.