Prescott set for return as Cowboys seek bounce back vs Lions 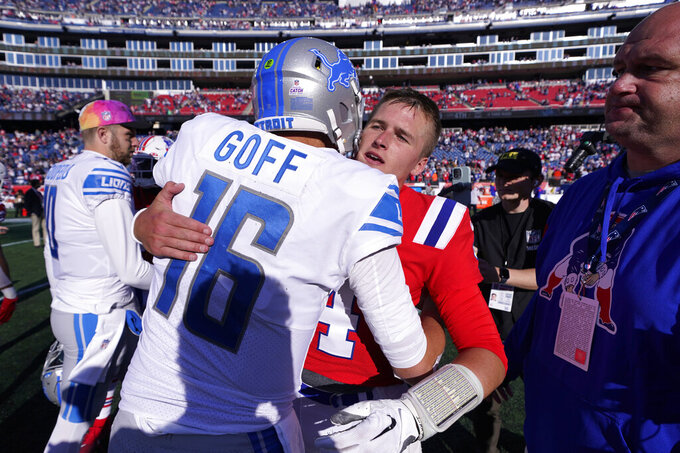 OPENING LINE: Cowboys by 7, according to FanDuel Sportsbook.

TURNOVER DIFFERENTIAL: Lions minus-2; Cowboys plus-2.

LIONS PLAYERS TO WATCH: RBs Jamaal Williams (332 yards rushing) and D'Andre Swift (231) have combined to help lead the Lions to at least 750 yards on the ground through five games (757) for the first time since 1991. Detroit is hopeful Swift will return after missing two games with ankle and shoulder injuries. Williams is tied for second in the NFL with six rushing TDs. The run game is the biggest vulnerability for a strong Dallas defense. The Cowboys have allowed an average of at least 4.6 yards per carry in three of six games. The Lions are second to Baltimore in rushing average at 5.5 per carry.

COWBOYS PLAYER TO WATCH: QB Dak Prescott appears set to return after missing five games with a fractured thumb on his throwing (right) hand. While the Cowboys went 4-1 with Cooper Rush starting, defense is what kept them afloat. Dallas is near the bottom in total offense and passing yards after being among the NFL's best last season with Prescott. The seven-year starter is 3-0 against the Lions with eight touchdowns and no interceptions.

KEY MATCHUP: Dallas RBs Ezekiel Elliott and Tony Pollard vs. Detroit run defense. Elliott is coming off consecutive games of at least 75 yards rushing for the first time since early last season, and the Lions are ranked last in the NFL in yards allowed at 168 per game. The Cowboys are averaging nearly 150 yards per game on the ground the past two weeks after a season-low 62 in a win over Washington.

KEY INJURIES: Lions WR Josh Reynolds missed the first two practices of the week with a knee injury. He has a three-game streak of at least six catches and at least 80 yards receiving. WR DJ Chark (ankle) and DE Charles Harris (groin) also were out the first two days of practice. ... Dallas TE Dalton Schultz has missed two of the past four games with a right knee injury. He doesn't have a catch since getting hurt. WR CeeDee Lamb has been dealing with groin and hip issues but hasn't missed a game. Indications are he will be available against the Lions.

SERIES NOTES: The Cowboys have a four-game winning streak that started with a 24-20 wild-card victory at home during the 2014 season. Five of the past six meetings have been one-score games. Detroit has one playoff victory since winning the 1957 NFL title, and that was a 38-6 win against Dallas on Jan. 5, 1992.

STATS AND STUFF: Detroit coach Dan Campbell grew up on a ranch near the Dallas area and played three seasons with the Cowboys before finishing his career with the Lions in 2008. He was drafted by the Giants and spent his first four years in New York. ... The Lions are tied with the Chargers for fewest sacks allowed with seven, and the Cowboys lead the league with 24 sacks. ... The Lions lead the NFL with four rushes of at least 50 yards. ... Detroit QB Jared Goff is the only NFC QB with two games of four TD passes. ... S DeShon Elliott, who played at Texas, had his second career interception in the loss to New England. ... Prescott had 23 TD passes with just three interceptions in his past nine home starts. Dallas is 5-4 in those games. ... The 1,101 net passing yards allowed by the Dallas defense are the fewest for the club since 2003. ... DE Dorance Armstrong has already tied his career high of five sacks through just six games. ... DE DeMarcus Lawrence had TD returns of a fumble and an interception in his career. J.J. Watt and Yannick Ngakoue are the only other defensive linemen to do that since Lawrence was drafted in 2014.

FANTASY TIP: Fantasy owners will have to weight Prescott's dominance against the Lions with what amounts to a six-week layoff since getting injured in a season-opening loss to Tampa Bay. “He’s just got to get his timing back,” coach Mike McCarthy said. “I think like any player that comes back from return to play, there’s medical clearance, but there’s the timing component, regardless of your position.”