QB woes have Texans on 8-game skid entering off week 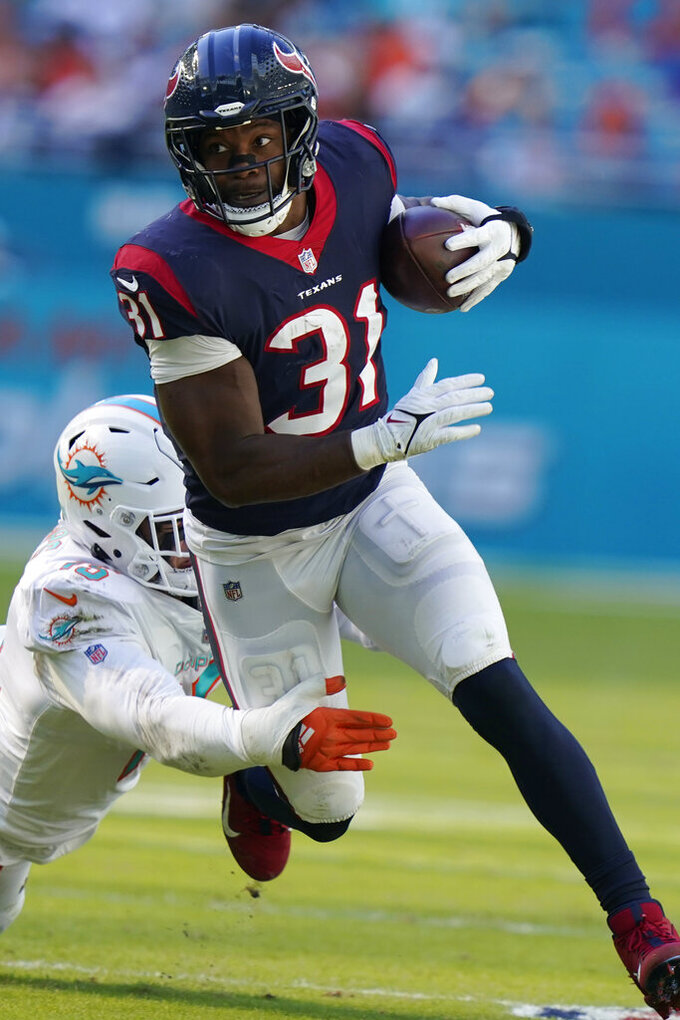 But even though things didn’t go well for Taylor in a 17-9 loss to the Dolphins, coach David Culley is sticking with the veteran quarterback and said he’ll start when Houston (1-8) resumes play after this week off, on Nov. 21 at Tennessee.

Culley said he spoke with Taylor to encourage him after Sunday’s performance when he threw three interceptions for just the second time in his NFL career and the first time since 2015.

Houston had quarterback problems long before the season began with Deshaun Watson sitting out amid a trade request and 22 lawsuits alleging sexual harassment or assault. Things only got worse when Taylor was injured and Houston had to rely on third-round draft pick Davis Mills.

Taylor led the Texans to their only win in the opener against Jacksonville before being injured in the first half in a Week 2 loss to Cleveland. Mills filled in for the next six games while Taylor recovered from a hamstring injury and Houston dropped each of those contests.

There was hope Taylor’s return would help the Texans get back in the win column, but instead one of the worst performances of his career extended their losing streak. It’s the team’s longest skid since losing the final 14 games of the 2013 season.

“I can’t look at the big picture,” Taylor said. “Each time you get out on the field you want to perform at a high level and give your team an opportunity to win. That’s what it really boils down to — take it one game at a time and continue to keep battling.”

The Texans forced a season-high five turnovers Sunday to give them 14 this season, tied for 10th most in the league. Defensive coordinator Lovie Smith, in his first year in Houston, made creating turnovers a priority this season after the Texans ranked last in the NFL in 2020 with just nine all year.

The Texans have plenty of areas that need help after getting just one win in nine games, but perhaps their biggest issue outside of problems at quarterback is an inability to run the ball.

Houston ranks 31st in yards rushing a game with just 75.8. The addition of Mark Ingram was supposed to help improve the team’s ground game after the Texans were also the second-worst rushing team in the league last season. Instead, he failed to do much after a solid game in the opener and was traded to the Saints on Oct. 27, leaving David Johnson, Phillip Lindsay and Rex Burkhead to carry the running game.

With Ingram gone, Lindsay is the team’s leading rusher with 133 yards this season. The Texans will need one of these players to step up to improve the ground game and take some pressure off Taylor if Houston is to improve offensively.

Nobody on this bad team has consistently performed well through the first nine games.

Johnson continues to underperform in his second season in Houston after arriving as part of the trade for star receiver DeAndre Hopkins. The seven-year veteran started 12 games for the Texans last season but has been relegated to a backup this year behind Ingram and Lindsay.

When he has played, he’s been largely ineffective and has just 119 yards rushing.

LT Laremy Tunsil has been out since having surgery on his left thumb on Oct. 14 but could return to practice next week as the Texans prepare for the Titans. ... LB Christian Kirksey was placed on the injured reserve Friday after also having thumb surgery and the earliest he could return is Dec. 5. ... C Justin Britt went on the injured reserve with a knee injury Oct. 30 and it’s unclear how long he’ll be out.

130 - Houston’s 130-point scoring differential is the worst in franchise history through nine games. The Texans are the fifth team in the last 10 seasons to have been outscored by 130 points or more in the first nine games.

Culley, in his first year as a head coach after decades as an assistant, has remained positive despite the mounting losses. He believes the team can improve after its week off if the players focus on doing the little things right and being accountable for their mistakes.

“We are going to assess everything and make sure that we can find things to help us eliminate those things that are keeping us from being consistent offensively, defensively and on special teams to help us win football games,” he said. “We know what they are. We know the process. We just have to keep coaching it and we are going to keep doing that.”