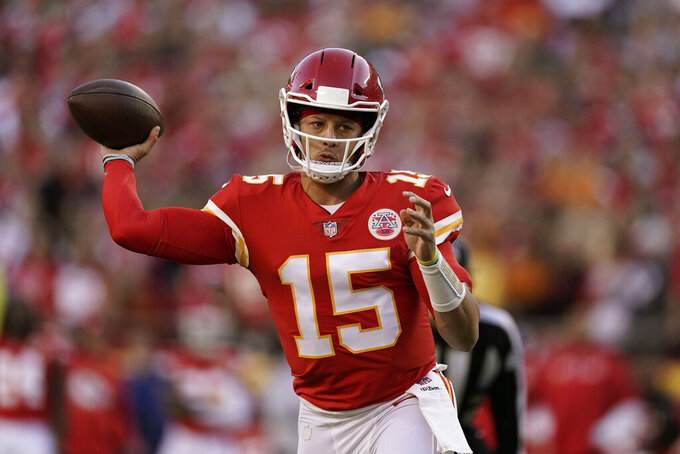 BETTING LINE: Chiefs by 2 1/2, according to FanDuel SportsBook.

TURNOVER DIFFERENTIAL: Chiefs minus-9; Raiders plus-2.

CHIEFS PLAYER TO WATCH: WR Josh Gordon took more snaps than Demarcus Robinson last week, a sign the former All-Pro is starting to pick up the Kansas City offense. The next step is for Gordon and QB Patrick Mahomes to get on the same page. Their only connection came in Week 5 against Buffalo, even though Gordon has been targeted plenty of times since.

RAIDERS PLAYER TO WATCH: DE Yannick Ngakoue has back-to-back games with two sacks and has done it in three of the past four contests. Ngakoue is the first Raiders player with consecutive multi-sack games since Khalil Mack in 2016 and can tie the franchise record held by Mack (2015) and Derrick Burgess (2005) by doing it in three straight games.

KEY MATCHUP: Chiefs TE Travis Kelce vs. Raiders LB Cory Littleton. Kelce has averaged 110.3 yards receiving and has five TDs in his past six matchups against the Raiders. Littleton could get plenty of time matched up with Kelce and figures to have his hands full.

KEY INJURIES: Chiefs RT Mike Remmers has been out with a knee injury, and backup Lucas Niang hurt his ribs against the Packers. That forced third-stringer Andrew Wylie to finish the game. .. DT Johnathan Hankins (back) and LB Nick Kwiatkoski (ankle) could miss the game for the Raiders.

STATS AND STUFF: Reid needs one more win to pass Curly Lambeau (226) for fifth place on the regular-season list. ... Mahomes needs 300 yards passing to pass Kurt Warner (29) for the most 300-yard games in a quarterback’s first five seasons. ... Mahomes is 10-1 in the month of November. ... Mahomes threw for 166 yards last week against Green Bay, the lowest total of his career in a game that he finished. ... Mahomes has six interceptions in six games against the Raiders. ... Kelce has caught a pass in 120 consecutive games, the second-longest streak in Chiefs history. ... WR Tyreek Hill needs one TD to pass Jamaal Charles (64) for third most in Chiefs history. Hill has 53 through the air, six on the ground, four on punt returns and one on kickoff returns. ... Chiefs K Harrison Butker has three field goals of at least 50 yards, one off the single-season club record. ... Chiefs RB Darrel Williams ran for a career-best 70 yards last week against Green Bay. ... LB Nick Bolton leads all rookies with 71 tackles and is second with nine tackles for loss. ... The Raiders are 2-1 under interim coach Rich Bisaccia. ... Las Vegas turned over the ball three times last week after having only five in the first seven games. ... The Raiders have gained a league-leading 98.3 net yards passing per game more than their opponents. ... Las Vegas RB Josh Jacobs had a season high 95 yards from scrimmage last week and has run for a TD in three of the past four games. ... The Raiders have topped 100 yards rushing in back-to-back gams after doing it only once in the first six games. ... This is the first time since 1999 that the Raiders held each of their first eight opponents to fewer than 30 points.

FANTASY TIP: The Raiders settled for four FGs on six red-zone drives last week as part of a continuing problem of finishing off drives. That could make K Daniel Carlson a prime target as no team has attempted more field goals from inside 40 yards than the Raiders the past two seasons.