Raiders look to regroup after collapse sends them to 0-2 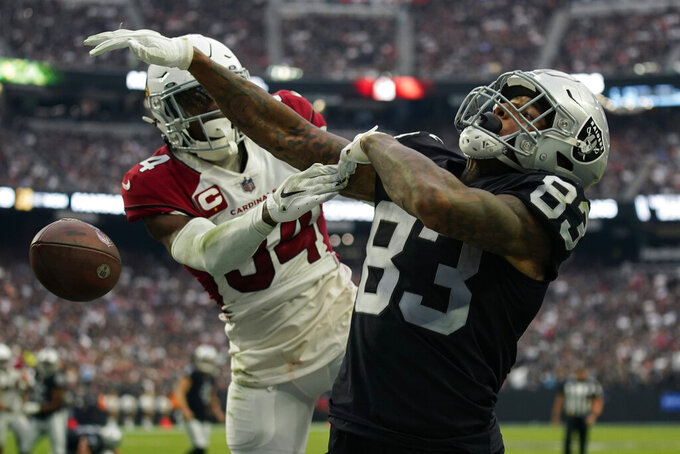 The offseason optimism surrounding the Las Vegas Raiders following the additions of Davante Adams, Chandler Jones and Josh McDaniels seem in the distant past.

That's what an unprecedented collapse can do.

The Raiders have lost their first two games of the season, blowing a 20-point halftime lead and 16-point fourth-quarter lead in a 29-23 loss to the Arizona Cardinals on Sunday.

Now, instead of building on last year's playoff berth, the Raiders are just trying to get going in 2022 under a new regime.

“You don't ever get a pass like, ‘Hey we’ll just graduate last year’s process to this year’s process,’” McDaniels said Monday. “You have to go back through and learn it again. It starts with me. I don't get any points for what I've done in the past. Neither does anyone else. We’ll have to go through these growing pains together.”

There have been plenty so far.

The Raiders fell in a big early hole in the opener against the Los Angeles Chargers and were unable to climb out of it.

They then started fast against the Cardinals, racing to a 20-0 lead at the half and seemingly in complete control heading into the fourth quarter up 23-7.

But the offense stagnated, the defense wilted late against Kyler Murray and the Cardinals managed to tie the game on the final play of regulation and win it when Byron Murphy returned a fumble by Hunter Renfrow 59 yards for the game-winning score in overtime.

This marked the first time in Raiders history they lost a game they had led by at least 20 points.

“We feel crappy right now, but we are still a good football team,” quarterback Derek Carr said. "Making sure we keep that mindset not, ‘Oh no, it’s over.’ I’ve been doing this a while, man. I know we have good guys that work hard and care, so I know that we can pull ourselves out of it, but it’s going to take us doing it the right way.”

First-half offense. The Raiders had four drives in the first half and turned them all into scores, with Carr throwing short TD passes to Davante Adams and Darren Waller and Daniel Carlson kicking two field goals. The Raiders averaged 6.8 yards per play and Carr was 18 for 24 for 210 yards before halftime.

Second-half offense. Almost nothing went right after halftime for the Raiders on offense. Las Vegas averaged 2.9 yards per play after halftime, scoring three points on five possessions. Carr went 7 for 15 for 42 yards and a 53.5 rating as the Raiders were unable to burn the clock to keep the tired defense off the field.

Carlson made three more field goals to make him 41 for 41 all-time at Allegiant Stadium. That's the most makes without a miss for a kicker in a single stadium since the NFL/AFL merger, topping the 18 for Al Del Greco at Vanderbilt Stadium and Dan Carpenter at MetLife Stadium.

Carlson now has made 28 consecutive field goals overall dating back to Week 8 of last season, the longest active streak in the NFL.

Carr to Adams connection. The former college teammates weren't as sharp in Week 2 as they were in the opener when Adams had 10 catches for 141 yards and a TD. Adams caught a 1-yard TD on the opening drive and an 11-yard pass late in the second quarter but was shut out in the second half. His two catches were his fewest in a game since Oct. 22, 2017, when Brett Hundley played QB for Green Bay against New Orleans.

Renfrow was evaluated for a concussion after getting hurt on the final play. McDaniels had no update on his status. ... DT Bilal Nichols also left the game with a shoulder injury and didn't return.

117. The Raiders had been 117-0 in the regular season and playoffs when leading by at least 16 points after the third quarter before blowing it against the Cardinals.

The Raiders travel to Tennessee on Sunday looking to avoid their first 0-3 start since 2018.