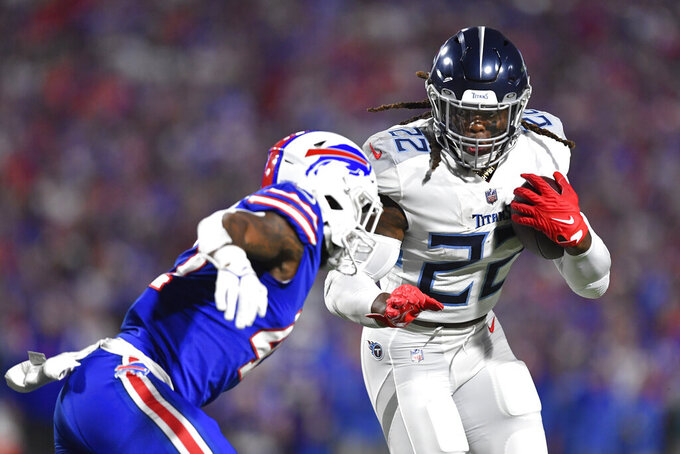 OPENING LINE: Raiders by 1 1/2, according to FanDuel SportsBook.

TURNOVER DIFFERENTIAL: Raiders minus-3; Titans minus-3.

RAIDERS PLAYER TO WATCH: WR Davante Adams. After having 10 catches for 141 yards and a TD in his Raiders debut, Adams was much quieter last week. He had two catches for 12 yards for his fewest receptions in a game since 2017. He was targeted only seven times and didn't have a catch after halftime. Adams did have his 75th career TD catch.

TITANS PLAYER TO WATCH: QB Ryan Tannehill. Tannehill has won all four career starts against the Raiders with a 124.4 career passer rating in those games. Tennessee will hope for that kind of performance after Tannehill went 11 for 20 for 117 yards and two INTs in Week 2 against Buffalo before getting pulled early in a blowout loss.

KEY MATCHUP: Raiders run D vs Derrick Henry. The Titans star running back is off to a slow start with just 107 yards rushing the first two weeks. The Raiders run defense has been solid early this season, allowing just 3.7 yards per carry, sixth best in the NFL.

SERIES NOTES: The Raiders have won three of the past four games in the series. ... The road team has won the past five meetings with the Raiders winning three times in Tennessee and the Titans winning the last two meetings between the teams in Oakland.

STATS AND STUFF: Tennessee tries to avoid its first 0-3 start since 2009. ... The Titans' 34-point loss last week was their most lopsided since losing 57-14 to Houston on Oct. 1, 2017. ... Tennessee has scored TDs on the opening drive the first two weeks and 13 points on its other 20 drives. ... The Titans have been outrushed by 83 yards per game this season. Tennessee outrushed the opposition by 52.2 yards per game the past two seasons, second best in the NFL. ... WR Treylon Burks was among four Titans rookies in the starting lineup in Buffalo. Burks led the Titans with four catches for 47 yards. That’s the most rookie starters for Tennessee since starting four Dec. 13, 2015, at the New York Jets. ... The Titans played a total of nine rookies against the Bills, the most since playing nine against Houston on Jan. 1, 2017. ... The Titans are 8-2 in games played on short rest or anything less than a six-day break between games. ... Two-time All-Pro Titans S Kevin Byard is set to play in his 100th career regular-season game. ... The Raiders look to avoid their first 0-3 start since 2018. ... Las Vegas is 11-6 on the road since the start of the 2020 season. ... The Raiders blew a 20-point lead in last week's loss for the first time in franchise history. ... Las Vegas is passing on 70.9% of plays this season, the second highest rate in the NFL. ... Raiders DE Chandler Jones had five sacks for Arizona in the season opener at Tennessee last season. ... Las Vegas WR Mack Hollins had five catches for 66 yards last week. ... Raiders QB Derek Carr has completed just 1 of 7 passes thrown at least 20 yards downfield. ... Las Vegas K Daniel Carlson has made 28 consecutive FGs, the longest active streak in the NFL. ... Raiders LB Divine Deablo had 15 tackles last week.

FANTASY TIP: The Raiders have shied away from the running game the first two weeks, but could look to get Josh Jacobs going this week. Jacobs had 81 yards from scrimmage last week and 73 in the opener. He looks healthy and could put up big numbers if he gets more chances.