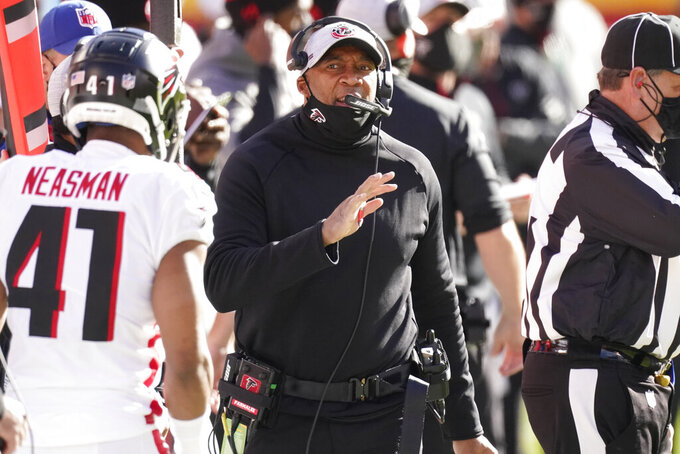 FILE - In this Dec. 27, 2020, file photo, Atlanta Falcons head coach Raheem Morris walks on the sideline during the first half of an NFL football game against the Kansas City Chiefs in Kansas City. The Los Angeles Rams have hired Raheem Morris to be their new defensive coordinator, the team announced Thursday, Jan. 21, 2021. (AP Photo/Charlie Riedel, File)

The Rams also hired Joe DeCamillis as their third special teams coordinator in three seasons, with coordinator John Bonamego moving into a role as a senior coaching assistant.

Morris finished last season as the Atlanta Falcons' interim head coach, going 4-7 as Dan Quinn's temporary replacement. He spent six seasons on Quinn's staff in a variety of positions, coaching both the offense and the defense before serving as defensive coordinator last season.

“Not only is Raheem a great communicator, he is also an excellent teacher," McVay said. "Raheem’s background coaching both offense and defense gives him a unique perspective which allows him to see the field from a 22-man perspective.”

Anchored by All-Pros Aaron Donald and Jalen Ramsey, the Rams' defense ranked first in the NFL in total yards allowed, yards passing allowed, touchdown passes allowed, first downs allowed and total points allowed during a spectacular debut by Staley, who had never been an NFL coordinator before this season.

After the announcement, Ramsey enthusiastically tweeted that he is “excited about the future” under Morris, who has been a defensive backs coach at several stages in his career.

The Rams' defense could undergo significant personnel changes for the second straight year. John Johnson, the starting safety and defensive signal-caller, is a rising star who could command a hefty salary as a free agent. Edge rusher Leonard Floyd also is a free agent after racking up 10 1/2 sacks in the regular season and two more in the playoffs during his first year in Los Angeles.

Staley replaced Wade Phillips last winter after the Rams' defense had three solid seasons under the veteran NFL coach. After turning an already good defense into the league's best, Staley got a head coaching job with the crosstown Chargers after just four seasons of NFL experience.

The Rams (11-7) finished second in NFC West and beat Seattle in the playoffs before losing 32-18 at Green Bay last Saturday.

About an hour after Morris' hiring was announced, the Rams formally added DeCamillis to replace Bonamego, who spent one season running LA's special teams.

DiCamillis spent the past four seasons in charge of the Jacksonville Jaguars' special teams under head coach Doug Marrone. He has coached special teams in the NFL since 1988 and has been a coordinator since 2009, highlighted by a stint with the Super Bowl champion Denver Broncos during the 2015-16 season.

The Rams' special teams units regressed in almost every area this season, part of a steady decline since McVay's debut season in 2017.

Bonamego replaced John Fassel, who left the Rams for the Dallas Cowboys along with longtime kicker Greg Zuerlein last winter.

The Rams struggled in all aspects of the kicking game this season until the arrival of Matt Gay, Los Angeles' third kicker of the season. Gay finished the season with 13 consecutive made field goals, and he dramatically upped the Rams' touchback percentage on kickoffs.