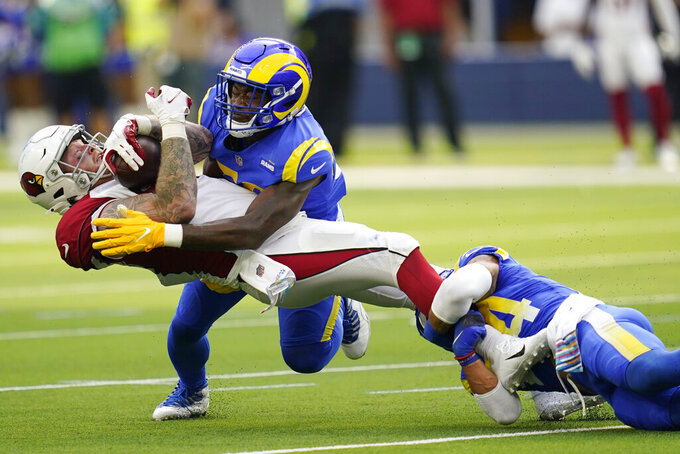 THOUSAND OAKS, Calif. (AP) — The Los Angeles Rams had the NFL's top defense in 2020, and a certain amount of regression was almost inevitable this year.

Losing a brilliant coordinator, four starters and a couple of key backups will do that.

Four games into an otherwise successful season, the Rams (3-1) are trying to stop the regression from becoming a full-fledged erosion.

After finishing last season first in the league in yards allowed and points allowed, only five teams have allowed more yards per game this year than the Rams (396.8). Los Angeles is also giving up 24.8 points per game, 18th in the league.

After Tom Brady and Kyler Murray led Los Angeles' last two opponents to 911 yards, 54 first downs and 61 points on back-to-back Sundays at SoFi Stadium, the Rams feel they've got to raise their level of defensive play, even if they probably can't reach the lofty standard set by Brandon Staley's group last year.

“Everybody, you know what went wrong, and you know how to fix it,” defensive coordinator Raheem Morris said Tuesday after evaluating the Rams' 37-20 loss to Arizona two days earlier. “Our execution and tackling weren't good on defense, and we didn't play well. So those things are easily corrected by scheming and then going out and doing what we need to do. ... Our job as coaches is to identify problems, and their job as players is to solve them.”

They've got little time to find those solutions this week with a visit to the Seahawks (2-2) looming Thursday night. Seattle offensive coordinator Shane Waldron also knows plenty about the Rams' defense after spending the past four seasons on Sean McVay's coaching staff in LA.

The Rams' defensive slip hasn't yet affected their status as a Super Bowl contender, but the problems are looming larger as opponents begin to employ new strategies to exploit the flaws already exposed in Morris' versions of Staley's schemes.

During the offseason, McVay was optimistic the turnover wouldn't force his defense to take any steps back. After Arizona blew out the Rams, the head coach acknowledged the process will take time.

“With our players, there’s a lot of new pieces that we’re asking to step into significant roles, whether it be from injuries or just some different things specifically to the back end," McVay said. "You lose some key guys. That’s such a vital part of it."

It's often difficult or pointless to identify individual faults in a consummate joint endeavor like an NFL defense, but the most glaring individual mistakes last weekend appeared to be made by cornerback David Long Jr., the Rams' ostensible replacement for Hill. Murray often threw in the direction of the inexperienced defensive back, particularly when he was in coverage on A.J. Green.

Morris indicated Long will face pressure for playing time from rookie Robert Rochell, who got only five defensive snaps against Arizona.

Ramsey is having an outstanding season in his do-everything role, but Donald is heading to Seattle off one of the quietest nights in his incredible career. The three-time NFL Defensive Player of the Year had no sacks, no tackles for loss, no quarterback hits and just four assisted tackles against the Cards.

“You just find a way to get better,” Donald said. “They had the lead and were able to stick to a game plan where we didn't get too many real opportunities to rush the quarterback. It's just football. That can't affect you. Obviously, I want to make every negative play I can. I want to have 100 sacks and 1,000 TFLs if I can, but realistically it ain't going to happen. I've just got to keep playing.”